Treasures along Thames in London

'Mudlarks' unearth the past on London's riverbanks. 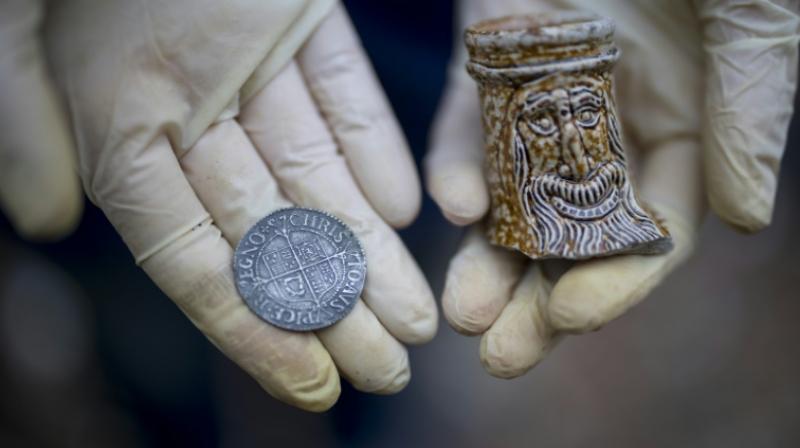 All findings by mudlarks are preserved in association with the Museum of London. (Photo: AFP)

London: Treading her way along the muddy banks of the River Thames, Lara Maiklem spots a 16th-century clothespin which she wipes and adds to a row of others puncturing her coat pocket. She treasures these handcrafted metal pins and other discoveries along the shore for the insight they give into those who walked there before her.

"Mudlarks" have scoured the foreshores of London's rivers for centuries, searching out lost or discarded items to sell, and the tradition lives on today in a small band of devotees. Over the past two decades, 48-year-old Maiklem has found pottery, a silver coin from the 1600s from the era of King Charles I, ivory combs and 18th-century clay pipes, some still bearing the makers' fingerprints. "These little snapshots of everyday London life, that you find coming out of the mud, every tide, it's like a giant history book," said Maiklem, who works in the publishing industry.

'Things lost along the way'

Many of the rivers, streams and brooks that cut through London have been built over and lost but the Thames remains at its heart, its tidal waters leaving evidence of centuries of life, work and death on the shore. "It's a treasure hunt," she told AFP, walking with her head down, eyes glued to the ground.

One of her most valuable finds was a Tudor gold aglet, the metal tip of a shoelace, which, as a gold item more than 300 years old, she was required by law to declare to the authorities. The weirdest thing? A sawn-off shotgun, with the bullets still inside. She has also found human remains, which must be reported to the police.

Maiklem says she never sells what she finds, and it is the "historical contact" that she loves. Among her favourite finds are bent sixpence coins from the 17th and 18th centuries, thrown into the river as love tokens for those who could not afford a ring. "People who have been forgotten by history, who didn't leave anything of themselves other than the things they lost along the way, this is what they left behind of themselves," she said.

Maiklem has just published a book, "Mudlarking", and also chronicles her finds on Facebook, Twitter and Instagram, part of a thriving social media community of mudlarks."When I don't know what something is and I post it, I'm always blown away by the knowledge that comes back," she said.

Mudlarks also work with the Museum of London to help identify and preserve their finds, with some currently on display at its "Secret Rivers" exhibition. "The Thames is the city's longest archaeological site, but it is vulnerable, it is fragile, and the mudlarks do excellent work at recording and helping to save that information," curator Kate Sumnall told AFP.

Although social media has fuelled interest in mudlarking, it is not for everyone. Mudlarks must first get a licence from the Port of London Authority (PLA), with around 1,500 people allowed to take part at any one time, although only a few dozen are regularly active.

The licences stipulate how deep mudlarks are allowed to delve and geographical limits are also in place, with some areas off limits for security or archaeological reasons. Maiklem neither digs nor uses a metal detector, preferring to focus on what washes up on the shore.

And while a wander along the water brings a peace rarely found in the city, it can be a grim task. The Thames is far cleaner than it used to be but London's creaking 19th-century sewer system often overflows into the river. The PLA also warns mudlarks that they must be aware of hypodermic needles and glass. "After heavy rain on a sewage spill day the foreshore is revolting," Maiklem said, noting she wears plastic gloves. "It's covered in unmentionable things and it smells disgusting."