At the University of Texas at Austin, some of us really enjoyed Hindustani classical music. 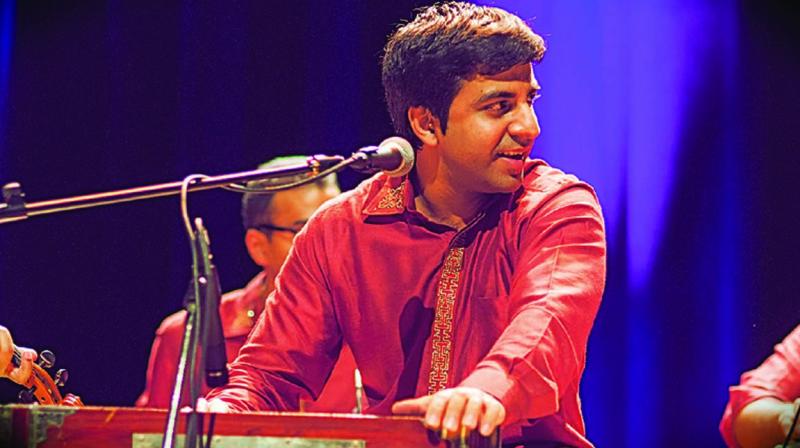 This seems to be the credo of the ensemble Riyaaz Qawwali, who sing Vaishnava Jana To and other Hindu bhajans in the Sufi qawwali style. I chat with their leader Sonny to find out how it came about...

When I first heard a bunch of young men in Pathani suits burst into a qawwali it drew my attention immediately because of the melodiousness of their voices. But I was blown when I listened to the lyrics. They were from the hoary bhajan, Vaishnava Jana To, in praise of Vishnu, the Hindu deity. I needed to know who these guys were. Imagine my surprise when I tracked them down to Austin, Texas! Yes, they are a group of lads originally from India, Pakistan, Bangladesh and Afghanistan, whose common love for music and Sufism brought them together. They have not only incorporated bhajans into their repertoire, but also Sikh shabads, apart from classic qawwalis. Here is their remarkable story, told by Sonny, the one who created the ensemble.

How did the group form? What made you choose the name Riyaaz Qawwali?

At the University of Texas at Austin, some of us really enjoyed Hindustani classical music. When we practised at open university spaces, students and teachers would enjoy the music regardless of whether they understood the lyrics or not. Some of these were from the Pakistani Students’ Association. They asked us to perform at their Eid banquet and that was the day Riyaaz Qawwali was formed.

Our name was not chosen by us but rather, given to us. Whenever friends called during the weekend to grab dinner or watch a movie, I would respond by saying, “Perhaps later, abhi to riyaaz kar raha hoon (I’m practising now).” One such friend was the host of an event in 2006. When he invited us to take the stage, he couldn’t think of any other name than Riyaaz. And that’s how we acquired it.

Who are the group members, how many, and from which countries originally? Any chance of a woman joining you?

There are 12 musicians in the ensemble; all settled in the United States. Their countries of origin include India, Pakistan, Bangladesh and Afghanistan. However, during performances and in public, we purposely remain elusive about our particular individual identities as we hope to create a broader unity within the South Asian community.

We would love to have a female join the group. It just has not happened so far. While challenges exist for male and female singers to perform qawwali together because of the particularly high vocal range that is involved, we are excited about this possibility in the future.

Is this a full-time occupation or do you guys hold day jobs? What’s the criteria for choosing a particular song?

We started the ensemble as students. The touring and recording blossomed as we were transitioning into the workforce. One by one, more of us are making Riyaaz Qawwali a full-time occupation. Some of us come from engineering, and others from business consulting fields. The whole group meets two to three times a week, usually in the evenings to accommodate those who are working. Our pieces are selected based on who the audience will be, and how we can best engage with them. The idea is to create a mehfil-e-sama, a gathering for listening. Yet, the main purpose for each concert is the same: To elevate spiritual intelligence.

Why this genre? Was anyone a qawwali singer in your family?

We believe  qawwali chose us, spoke to us, touched us. The genre is so powerful, musically and lyrically. We do not come from any qawwali gharana, there are no qawwals in our family trees. Many in the group are trained professionally in Western and Hindustani classical music, so singing came easy to us.

What has been the reaction of the general public to your converting Hindu bhajans into qawwalis? Any backlash from fundamentalist Hindus/Muslims?

The reaction has been positive.  It has brought forth people who want to build bridges. Conservatives have had their opinions along the way. Extreme right Hindu groups have warned us before our performances at temples. Conservative Muslim hosts have restricted us from singing certain verses. Some of this was expected, because our music does what qawwali has always done: Challenge the establishment.

Most of our performances are at theatres, performing arts centres and music festivals. Recently, there has been a demand to teach in schools and colleges. The academic world has been extremely supportive. Some professors are using our music to teach in their classrooms. Recently, I was honoured to be invited by Harvard University to lecture on, A Journey Of Cultures And Faiths Through Qawwali. In our efforts to cross new frontiers, we composed a sad number on the plight of immigrants in post-Trump America and it was very well received by the audience.

We’ve had some phenomenal experiences.  Once, a pregnant woman came up to us after a concert, thrilled that her baby had started kicking inside her for the first time. Some people have been so moved during the performances that they begin to cry. Many have become so emotional that they come backstage to bless us.

Any chance of performing in India?

Of course, that would be really wonderful! So far, we’ve only covered Europe and the USA.