Only two of 56 wild birds that once lived survived Category 4 storm that pummeled US territory in September 2017. 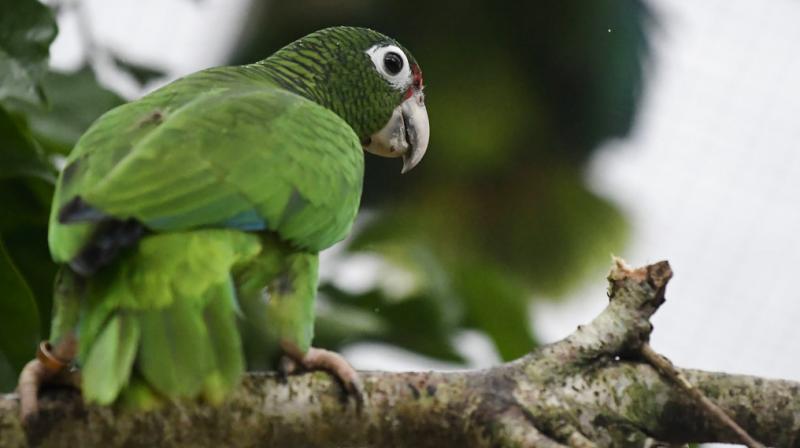 While several dozen new parrots have been born in captivity and in the wild since Maria, the species is still in danger, according to scientists. (Photo: AP)

Puerto Rico: Biologists are trying to save the last of the endangered Puerto Rican parrots after more than half the population of the bright green birds with turquoise-tipped wings disappeared when Hurricane Maria hit Puerto Rico and destroyed their habitat and food sources.

In the tropical forest of El Yunque, only two of the 56 wild birds that once lived there survived the Category 4 storm that pummeled the U.S. territory in September 2017. Meanwhile, only 4 of 31 wild birds in a forest in the western town of Maricao survived, along with 75 out of 134 wild parrots living in the Rio Abajo forest in the central mountains of Puerto Rico, scientists said.

And while several dozen new parrots have been born in captivity and in the wild since Maria, the species is still in danger, according to scientists.

"We have a lot of work to do," said Gustavo Olivieri, parrot recovery program coordinator for Puerto Rico's Department of Natural Resources.

Federal and local scientists will meet next month to debate how best to revive a species that numbered more than 1 million in the 1800s but dwindled to 13 birds during the 1970s after decades of forest clearing.

The U.S. and Puerto Rican governments launched a program in 1972 that eventually led to the creation of three breeding centers. Just weeks before Maria hit, scientists reported 56 wild birds at El Yunque, the highest since the program was launched.

But the population decline is now especially worrisome because the parrots that vanished from El Yunque were some of the last remaining wild ones, said Marisel Lopez, who oversees the parrot recovery program at El Yunque for the U.S. Fish & Wildlife Service.

"It was devastating. After so many years of having worked on this project...," she stopped talking and sighed.

The Puerto Rican Amazon is Puerto Rico's only remaining native parrot and is one of roughly 30 species of Amazon parrots found in the Americas. The red-foreheaded birds grow to nearly a foot in length, are known for their secrecy and usually mate for life, reproducing once a year.

More than 460 birds remain captive at the breeding centers in El Yunque and Rio Abajo forests, but scientists have not released any of them since Hurricane Maria. A third breeding center in a forest in the western rural town of Maricao has not operated since the storm. Scientists are now trying to determine the best way to prepare the parrots for release since there are such few birds in the wild they can interact with, and whether Puerto Rico's damaged forests can sustain them.

One proposal scientists will consider is whether to capture some of the remaining wild parrots in the Rio Abajo forest and place them into the same cage as birds that will be released into the wild, so they can learn to emulate their social behavior to ensure their survival, said Jafet Velez, a wildlife biologist with U.S. Fish & Wildlife Service.

Scientists are tentatively planning to release 20 birds next year in Rio Abajo.

Another proposal is to release more parrots in Maricao, which was not as heavily damaged by Maria.

"Our priority now is not reproduction...it's to start releasing them," Lopez said, adding that breeding centers can hold only so many parrots.

But first, scientists need to make sure the forests can offer food and safe shelter.

Jessica Ilse, a forest biologist at el Yunque for the U.S. Forest Service, said scientists are collecting data about the amount of fruit falling from trees and the number of leaves shed. She said the canopy still has not grown back since Maria and warned that invasive species have taken root since more sunlight now shines through. Ilse said that many of the large trees where parrots used to nest are now gone and noted that it took 14 months for El Yunque's canopy to close after Hurricane Hugo hit Puerto Rico in 1989 as a Category 3 storm.

Scientists also are now collecting new data on the number of predators at El Yunque, including el guaraguao, a red-tailed hawk that hunts Puerto Rico parrots. Without a canopy and proper camouflage, wild parrots have become an easy target.

Ilse said local and federal scientists plan to help the forest recover through planting. By the end of November, they expect to have a map detailing the most damaged areas in El Yunque and a list of tree species they can plant that are more resistant to hurricanes.

"People keep asking us, 'How long is it going to take?'" Ilse said.

But scientists don't know, she added.

"The damage is more extensive than (hurricanes) Hugo and Georges...It's been a complete change to the ecosystem.”