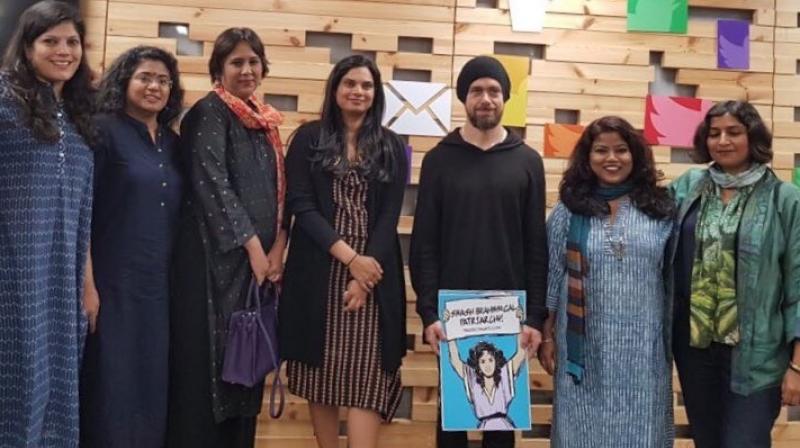 Dorsey during his visit, interacted with women journalists, activists and writers to discuss Twitter experience in India. (Twitter Screengrab)

Twitter CEO Jack Dorsey is facing a huge backlash after a photograph of him holding a placard with the words 'Smash Brahminical Patriarchy' was posted online and subsequently went viral. Dorsey was on his maiden visit to India.

During Twitter CEO @jack's visit here, he & Twitter's Legal head @vijaya took part in a round table with some of us women journalists, activists, writers & @TwitterIndia's @amritat to discuss the Twitter experience in India. A very insightful, no-words-minced conversation 😊 pic.twitter.com/LqtJQEABgV

The CEO of the micro-blogging site interacted with women journalists, activists and writers to discuss Twitter experience in India.

However, more from the content of the said discussion, a picture from the gathering soon went viral leading to an outrage online which, according to an India Today report, accused Dorsey of attacking an 'ethnic group'.

By holding that offensive poster #Twitter head @jack just proclaimed he is a Brahmin hating, racist, bigot, masquerading as a woke Feminist. And he came to India to play politics. At least the pretence is over. pic.twitter.com/5FlFHMsIxp

Amid the controversy, Twitter India was forced to release an unofficial statement, clarifying that a member had offered the poster to Dorsey and assuring that Twitter believes in hearing all voices.

The Twitter user @Dalit Diva, who has made the particular poster and gifted the placard to Dorsey tweeted saying that the reactions were nothing but a 'meltdown' over her artwork on ending caste apartheid.

Apparently #hindutva trolls are having a meltdown over my posters on #Endcasteapartheid and #Smashbrahmincalpatriarchy because @jack was gifted one of them from a #Dalit activist that was present. @twitterindia https://t.co/akzhupMh1K pic.twitter.com/l3YKnhweoz

Twitter India's unofficial statement following the outrage read. "Recently, we hosted a closed-door discussion with a group of women journalists and changemakers from India to better understand their experience using Twitter. One of the participants, a Dalit activist, shared her personal experiences and gifted a poster to Jack." The tweet also said that while the statement itself was not from the CEO or Twitter itself, it depicted the "company's efforts to see, hear, and understand all sides of important public conversations that happen on our service around the world."

Recently we hosted a closed door discussion with a group of women journalists and change makers from India to better understand their experience using Twitter. One of the participants, a Dalit activist, shared her personal experiences and gifted a poster to Jack. https://t.co/96gd3XmFgK

Hi @jack
I wonder if you're aware of the statement you're making by holding that poster. Are you against "Brahmins"? Are they the sole perpetrators of patriarchy?
Why come into an unknown country (to you) and get used as a proxy by vested interests?

SHOCKING! A "smash Brahmanical" poster on proud display during @Twitter CEO @jack visit to India. Is this demonology of Brahmins by foreign #BreakingIndiaForces acceptable? Is it hate speech?

This is a pure hate poster targeting an ethnic group. Does it not violate Twitter policies? Would @jack hold up a poster like this targeting Jews or Muslim mullahs or Church patriarchy?

Dear @jack either you're ignorant of the hate poster your holding or a bigot and hate speech supporter. There's no other explanation for this stupidity