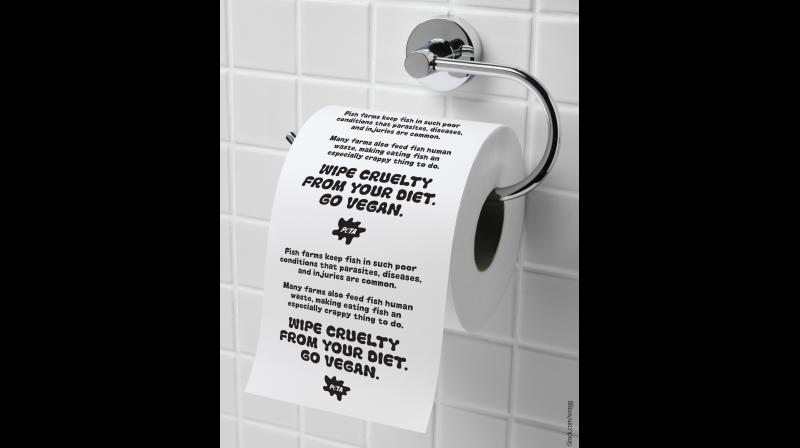 10,000 tonnes of human waste–fed fish are reared in the east Kolkata wetlands each year.

Kolkata: People for the Ethical Treatment of Animals (PETA) India supporters, on World Toiler Day, stocked bathrooms in restaurants and other public facilities in Kolkata with rolls of toilet paper printed with the message "Fish farms keep fish in such poor conditions that parasites, diseases, and injuries are common. Many farms also feed fish human waste, making eating fish an especially crappy thing to do. Wipe cruelty from your diet. Go vegan."

Speaking about the move, PETA India CEO Dr Manilal Valliyate  said, "The public has a right to know that the fish they consume may have been fed human excrement, and this cheeky toilet paper will help them learn the truth,"

He added, "PETA India is encouraging anyone disgusted at the thought of filthy fish farms to keep all sensitive animals off their plates in favour of clean and vibrant vegan meals."

10,000 tonnes of human waste–fed fish are reared in the east Kolkata wetlands each year. Fish forced to swim in human excrement are said to have fed at least three generations of Kolkata's residents. The practice of selling sewage-fed fish to consumers also exists in Bhopal, Chennai and Nagpur.

PETA India noted that scientific studies confirm what marine biologists have been saying for years: fish feel pain, just as all other animals do.

An issue of the US publication Fish and Fisheries cited more than 500 research papers on fish intelligence showing that they have impressive long-term memories and sophisticated social structures.

However, those killed for consumption are impaled, crushed, suffocated, or gutted – all while they're still conscious.

On fish farms, they're confined to cramped, filthy enclosures underwater. Parasitic infections, diseases, and injuries are common there.

When fish are caught from the seas, dolphins, turtles, and other animals are pulled up along with "target fish" in nets, and the injured animals are thrown overboard, where they fall victim to swarming birds or slowly bleed to death.