‘Heart' of Catholicism in Thailand fired up for Pope Francis. 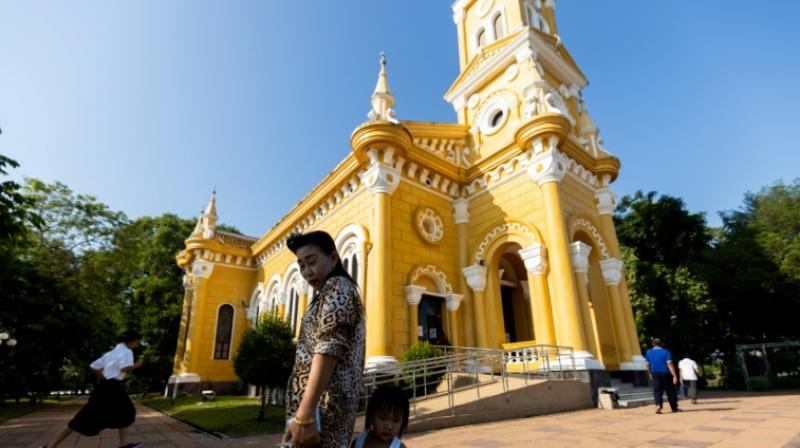 The church, which is painted yellow and rises up off land by the river, is proud of its historic role in spreading the faith. (Photo: AFP)

Setting foot in a powerful Buddhist kingdom more than three centuries ago, fearless European missionaries built a church on the banks of a river -- the birthplace of a Catholic community in Thailand which eagerly awaits the arrival of Pope Francis on Wednesday.

About an hour's drive from Bangkok, Ayutthaya is now a sleepy town of mostly Buddhist ruins and backpackers but in the past it was a vibrant, cosmopolitan city seen as a diplomatic meeting point between east and west.

That made it possible for Rome to establish the "Mission de Siam" 350 years ago at a time when missionary work in Asia was dangerous and viewed with deep suspicion.

"This church is considered the heart of Catholicism in Thailand," said Father Tweesak Kitcharoen after a recent mass at St. Joseph's. A Catholic holdout in a sea of Buddhist temples, the mission survived hardship, occasional hostility and war.

The original church was built around 1666, according to Tweesak, but it was deemed too small. A second model was burned down when armies from Burma sacked the city in 1767, and it was rebuilt two more times.

The Catholic community there held on even after the capital was moved to Bangkok in the late 18th century. Singing hymns in Thai and kneeling in prayer, the 100 or so congregants who attend Sunday services at St. Joseph's are part of Thailand's 380,000-strong Catholic community, roughly 0.5 percent of the population.

They are fired up in anticipation of Francis's first visit, which aims to mark the anniversary while highlighting religious harmony. "I've only seen him on TV and I can't believe that I will finally have the chance to meet him," said Prathuang Boonkong, 62, who plans on attending a stadium mass led by the pope.

The church, which is painted yellow and rises up off land by the river, is proud of its historic role in spreading the faith. In a surrounding garden it has even erected a model of the boat that brought missionaries from Europe.

A statue on the grounds represents Bishop Pierre Lambert de la Motte, who is thought to have requested the land from King Narai. The early arrivals encountered some initial hostility from local residents, who would also later associate Catholicism with French colonial efforts in Southeast Asia.

But they did not face the same pushback as they did in Japan -- the next stop on Francis's itinerary after Thailand. There, missionaries were expelled and local adherents forced to renounce the faith.

In a message home from Thailand, de la Motte wrote he had "never seen any land" with different religions living in such harmony, said local historian Puttipong Puttansri.