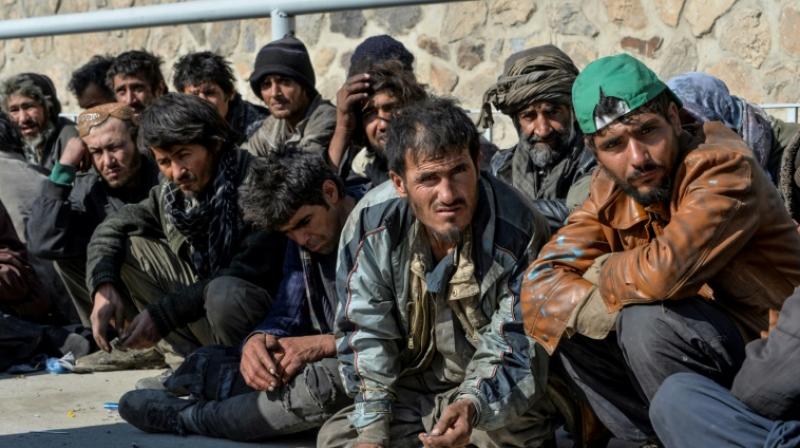 At a sprawling rehabilitation centre on the outskirts of Kabul, dozens of dazed-looking drug addicts clamber out of police buses and shuffle toward the facility.

The men, arrested on the streets of the Afghan capital, have been sent to a compulsory detox programme established to tackle an explosion in the use and production of highly addictive methamphetamine.

Almost unheard of in Afghanistan until a few years ago, meth's sudden appearance has blindsided authorities in a country already suffering from a crisis in opium and heroin addiction. "My life has been ruined by addiction," said 25-year-old Sulaiman, one of the 40 or so men arriving at the treatment centre.

The physical impact of the drug -- known locally as "shisha", or glass -- is evident: Sulaiman's sunken eyes and hollow cheeks paint a picture of meth addiction familiar in many Western nations. He says he got hooked while living in Iran several years ago. "I would do whatever it takes to get the drug, from labouring to stealing," he added.

Sulaiman and other patients at Ibn Sina, Afghanistan's largest addiction treatment facility, must undergo 45 days of mandatory rehab. Located on the site of a former military base, Ibn Sina currently houses around 900 men. Smaller facilities elsewhere are available for women.

Until 2017, it was filled mainly with opiate addicts, said Abdul Jabar Jalili, Ibn Sina's chief physician and counsellor. "Today, around 70 percent of patients here are addicted to meth," he told AFP, pointing to a group of addicts ambling around a sun-filled yard in the vast compound.

Naqibullah, another addict, started using the synthetic stimulant two years ago when his sister was killed in a Taliban bombing and a villager offered him a "non-addictive" drug to ease his grief.

"Initially... I liked it," the 34-year-old said. "But then came the dark side, and I started to go mad, becoming violent and attacking members of my family."

Data from 2015 -- when the last comprehensive national survey was carried out -- showed Afghanistan had about three million drug addicts, a huge proportion of the country's estimated 37 million people.

Experts say the number has only risen, and health officials estimate the proportion of addicts using meth could be as high as about 40 percent. But just a few years ago, meth was practically non-existent.

The first meth seizure was reported in southern Helmand province in 2008 -- a meagre amount of a few grams, according to Afghan counter-narcotic officials. In the first 10 months of 2019, a massive 935 kilos had been seized, said Kabir Ibrahimkhail, a senior counter-narcotics officer.

"At the rate it is increasing, it will not be a surprise if it soon replaces opium in Afghanistan," he told AFP. That would be hugely significant in a country that grows roughly 90 percent of the world's illicit opium, and raises the question of whether Afghan meth could end up following the same international trafficking routes.

There is no data available on how much is exported currently. In the past two years several shipments have been intercepted heading to Iran, India and Saudi Arabia, according to Khaled Mowahed, spokesman for Afghanistan's Counter Narcotic Justice Centre (CNJC).

Before 2015, Afghan production was scarce, with most of the drug believed to have come from neighbouring Iran, where pseudoephedrine, an ingredient found in cold medicine, is used as a precursor to cook meth.

But manufacturers have found they can use a local mountain shrub known as "Oman". Afghan officials only realised what locals were doing with this type of ephedra plant in 2017, when security forces stopped a bus carrying 1,400 kilogrammes of Oman in Farah province.

"They say meth is not addictive and can help beat your opiate addiction. Then they lower prices and in some cases stop distributing heroin, so addicts are forced to turn to meth," Haidari said.

The Taliban, who long used opium to fund their insurgency, have also moved into the burgeoning market. "In the areas they control, the Taliban charge a tax on each kilo of meth produce," said Jasmine Bhatia, a research fellow at the University of London's School of Oriental and African Studies.

The US military in 2017 began targeting drug-making laboratories in Taliban areas.Last May, US air strikes hit meth-producing labs in Farah province, though a UN report later said at least 30 civilians were also killed in the raid. The US insisted the meth labs were run and owned by the Taliban.

Back at the Ibn Sina treatment centre in Kabul, officials say the country is ill prepared to deal with meth. "We will have to work harder to save our people," said Ibn Sina director Zalmai Naurozi.