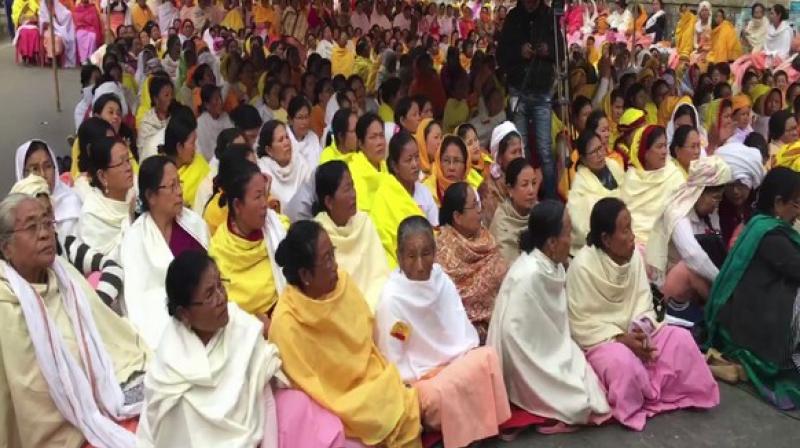 The first war resulted due to the mass-exploitation of people of Manipur and the Second war was triggered by indiscriminate export of rice from Manipur. (Photo: ANI)

Imphal: The 80th edition of the Nupi Lan' or the Women's War Day was observed in Imphal on Thursday.

The event took place at the Nupi Lan Memorial Complex in Imphal where people paid homage to the women freedom fighters who fought against the British rule.

Imphal has witnessed two such wars by women against Britishers. While the first war took place in the year 1904, the second one took place in 1939.

The first war resulted due to the mass-exploitation of people of Manipur and the Second war was triggered by indiscriminate export of rice from Manipur leading to a famine-like situation in the state.

"In remembrance of all our mothers who have sacrificed during the British rule- I have participated in this run," said a participant, Maibam Ongbi Robita.

Chief Minister of the state, N Biren Singh was present as the chief guest during the event and he was further joined by his deputy, Y Joykumar.

"A day like this is very good. A celebration like this is to prolong life for future mothers and daughters of our state and to instill the spirit of patriotism," said another participant, Ekashini.

Over 1000 women took part in the event donning the traditional attire of the state and participated in a 3-Km long run. The winners of the run were awarded cash prizes, trophies, and other gifts.