A mountain load of red-tapeism

The physiotherapist of Argentina’s National Rugby and Hockey team has conducted the test and expressed satisfaction over Kaamya’s results. 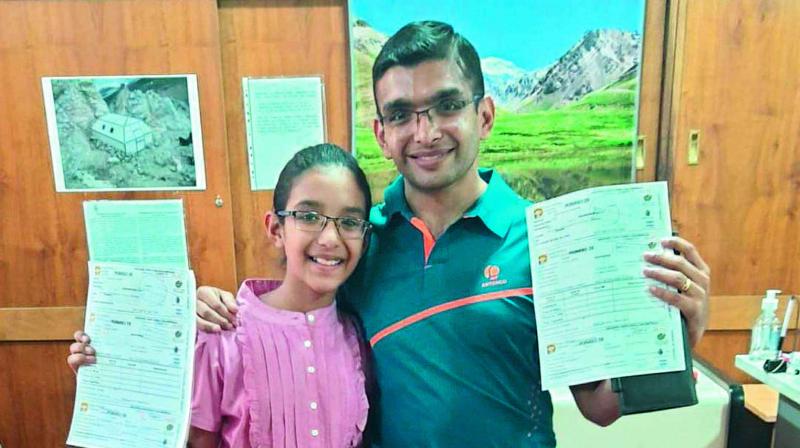 Karthikeyan with his daughter Kaamya show the permission letters for the expedition.

Indian Navy officer Commander S. Karthikeyan and his 12-year-old daughter Kaamya from Vizag have been stranded in the Mendoza City (Argentina) for the past 10 days.

The father-daughter duo arrived at the city on January 3, 2020 to scale Mt. Aconcagua, the highest peak in South America. However, the Aconcagua Park Authorities refused to give permission to Kaamya for reasons that she is a minor, before asking Cdr. Karthikeyan to obtain a resolution from the court.

Since then, Karthikeyan has been running from pillar to post for permissions, and administratively, it’s been a pretty tough going for the Naval officer.

“This is as per the rules. Since 2015, the Aconcagua Park Authorities have been merely taking an affidavit from parents (for minors) before issuing permits,” reveals Karthikeya, “However, last year, a case of high-altitude sickness in a 13-year-old boy who was eventually evacuated compelled the authorities to stick to the rules.”

The Indian Navy officer goes on to tell us that the Head of the Chancery in the Indian Embassy spoke to the Secretary and Director of the relevant Ministry, but their efforts have been in vain.

“The Family and Juvenile Court, however, again referred my case to the Legal Advisor for Minors, seeking her opinion on granting permission. And the Legal Advisor indicated that a medical examination (from a paediatric heart specialist) in Argentina is required. So we went ahead and carried out that too,” explains Karthikeyan.

Incidentally, despite Kaamya having scaled two mountains before, to further demonstrate her ability and fitness, on January 12, both the father and daughter went on a minor expedition at a nearby mountain, Piedra Grande (3,580 m).

“The video and photos of the expedition were submitted to the Legal Adviser to substantiate Kaamya’s ability to climb high altitudes without previous acclimatisation. The Legal Advisor expressed satisfaction and asked the Family and Juvenile Court to grant Kaamya the required permissions,” Karthikeyan narrates.

But no, that was not to be the end to the father-daughter duo’s plight.

The other twists in the tale

Even as the Legal Advisor cleared Kaamya, the Family and Juvenile Court judge decided to ask for a psychological evaluation once again as well as a spirometry test to check for Kaamya’s pulmonary functions by a doctor from the public hospital.

“The physiotherapist of Argentina’s National and Rugby and Hockey team has conducted the test and expressed satisfaction with the results,” recalls Karthikeyan. “The next day, on Thursday, a new judge showed up, and even we began wondering what new twist would add to our tale here, he heard the case and immediately gave us the permission Kaamya required. We have already started our expedition on Friday.

Adding that these issues are eye-openers for mountaineers about what could go wrong before an expedition, the father, whose anxious wait has finally ended, reveals how the delay has ultimately affected his pockets. “I have postponed my ticket, extended my Visa, and request a leave extension at work in India,” he laments. However, despite the repeated downers, what cheers Karthikeyan is that none of these issues has dampened the spirits of his little girl.