Life   More Features  21 Jan 2020  An insight into the minds of dancers, particularly the young ones
Life, More Features

An insight into the minds of dancers, particularly the young ones

Purva Dhanashree’s discipline Vilasini Natyam (the dance of the Andhra Devadasi) regards the sensual and the spiritual as two sides of the same coin. 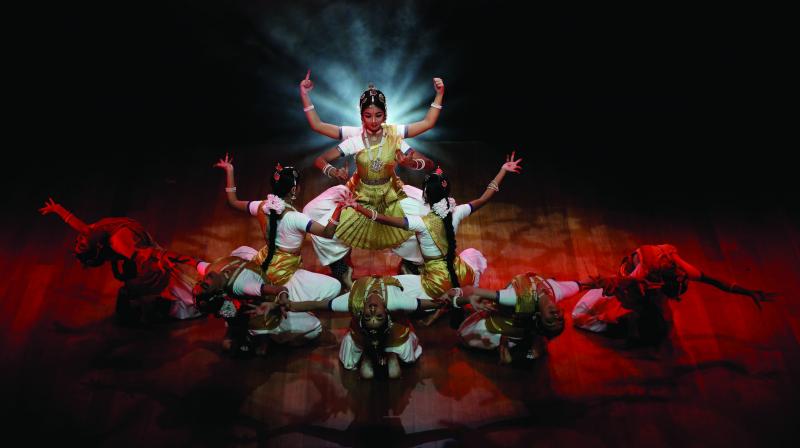 Apart from discussions, dancers were not afraid of trying to tether dance compositions, even in group forms, to metaphysical themes defying definition.

Non-stop music/dance recitals apart, discussions on various subjects during the Chennai Season, with dancers as participants, provided intriguing insights into the fertile minds of dancers — particularly of the younger brigade. The early morning discussions at the Music Academy saw the mini auditorium full at the early hour of 8.30 am! Particularly intriguing was the discussion on Classical Dance and “Spirituality” — that loaded term always touted in relation to classical dance. Is spirituality a search for a deeper meaning to life, a sense of connection human beings seek with the world at large, with nature, with religion? Does it mean love, devotion, deep involvement in a goal? Is spiritual experience possible without what is commonly understood as bhakti? Do we need spirituality in the arts at all? These were the introductory questions to trigger debate.

Apoorva Jayaraman, junior fellowship holder from the ministry of culture and convenor of Navadisha — New Voices in Dance wondered how, in today’s world with small attention spans, given its agnosticism, does one make abstraction in dance become a shared experience? “Bhakti” today is hardly a way of life, as it may have been for many of the senior dancers. Is spirituality the feeling of exhilaration while performing? Do we think of art as a means of enabling serving God? Describing spirituality as a non-intellectual experience, she wondered if dance with total alignment of body/mind making one closer to whatever one seeks, becomes a gateway to spirituality? Art then can be a means to achieve that feeling of oneness, lessening distance between perceiver and perceived, enabling one to understand spirituality, which, as an embodied experience through abstraction, can transfer that experience to others so that it becomes a shared experience.

The daughter/disciple of the late Maya Rao, Madhu Natraj, who specialises in Kathak and contemporary dance, in a light-hearted jibe at the frequent “koshish karoongi” (constant endeavour) of the Kathak dancer during a performance, mentioned the Guru as having a big role in passing on dance as embodied spirituality with its blend of the sensory and the sensual derived from the temple and the court. But how does one merge with what cannot be seen, what does not speak, what nobody can explain whether inside or outside and exists in silent space? As in “nirakata dhang”, Bindadin Maharaj’s “Lakshana geet”, the dancer, whose offering is the dance, implores that his body, the instrument, remains in able condition. Madhu mentioned the Sufi Muslim poet from the Deccan, Ibrahim Adil Shah II, who wrote ghazals in Dakhini, (a special dialect in the Deccan), who asks in “Ek nari dekhi”, “Is she (Sufi divinity was conceived in the feminine) this light, is she Muslim or Hindu? For me she brings the dashavatar of Vishnu.” Spirituality ultimately rests within one and dance is the sutra to experience the spiritual.

Purva Dhanashree’s discipline Vilasini Natyam (the dance of the Andhra Devadasi) regards the sensual and the spiritual as two sides of the same coin. The Devadasi’s relationship with the God she served was special for he was regarded as her friend, husband, lover and critic. As a Vilasini Natyam practitioner, for her the mood of sringar evoked through her dance was the means of experiencing higher connections. This sringar, far from instant gratification, comes from intense dedication.

For Malavika Sarukkai, spirituality was taking flight from what binds us. She quoted Ananda Comaraswamy, who said the holy land was the land of our own making. The sacred experience had to be found in the here and now, and like saint Tirumoolar had said, the God within oneself has to be discovered, Malavika stated. Admitting that for her, the King/God or God/King sringar/bhakti in compositions like the Varnam had been difficult to understand, for this approach did not resonate with her way of thinking, she avoided presenting these items. “Do I celebrate the body or transcend it?” She vibed with characters like Andal and she responded to nature and the seasons. But through years of “give”, and an arduous process of a lifetime, of “mindfulness, of surrender”, she realised that the dancing body comprises the site of the sacred. She realised that through the dance one could evoke an energy as a palpable (even in silence), unseen presence, and for her: “That is the moment of ‘God’ which you may touch. Miming expression is not enough. You have to be in it — to fly unfettered.” That is the spiritual moment and that moment when you touch space in consciousness beyond what one experiences in daily life, does not happen in every performance. It is a constant endeavour.

What was heartening about the session was the eclectic tone with no injunctions or religious certitudes. In fact, spirituality was not equated with religiosity, nor obeisance to conventional dogma. Asking queries with an open mind, encouraging ideation, there was an unstated agreement that what constituted spirituality would always be an open question.

Apart from discussions, dancers were not afraid of trying to tether dance compositions, even in group forms, to metaphysical themes defying definition.

Watching Sheela Unnikrishnan’s superbly trained group of disciples performing at the Krishna Gana Sabha, one wondered at the choice of the abstract theme “Aham Brahmasmi” (I am Brahman) of the Upanishads, producing mixed reactions. Aiming to visualise through movement that essence of consciousness called “Brahman” existing in each one of us, “unaffected by the body’s physicality, unsinged by fire, which, like the water reflects the light but is not touched by it and which has neither beginning nor end”, seems a task, which by its very nature is well-nigh impossible. The minute one tries to capture this formless essence (nirakara) through images, the substance gets lost. So one takes recourse to quotes in what becomes a highly word-oriented approach from the Vedas or from the philosophy of Shankaracharya, to images pertaining to religious denominations of Shaivism and Vaishnavism, with deities like Ganapati and Subrahmanya. But the “Nirgunam, Nirvishesham Parabrahmam” for this critic remained at a distance. There were too many colourful visuals being projected. Just retaining the one poetic image of the large, quivering lotus leaf with drops of water on it would have sufficed as an excellent metaphor suggesting the theme of Brahman.

The dance took up the story of Shankaracharya, the great Hindu thinker, who, at a young eight years found the imperative need to find a Guru because he felt that his infirm mind hopping from one thing to another was not the way to probe the deeper metaphysical aspects of life.

The manner he introduced himself to Guru Gauda Pada as being “none of the five elements or senses or mind but the essence of consciousness”, his growth and ever deepening desire to become one with that imperishable truth, were all clearly caught. When it came to the mind imprisoned in Maya showing the lure of forces like greed, desire, wealth, body lust, the dancers were very involved, though the loud costume colours, even as a contrast, seemed overdone. The musical ragamalika score comprising familiar ragas like Todi, Suratti, Bilahari, Sindhu Bhairavi, etc in tone and spirit had a light quality, not evocative of the feel of gravitas for such a profound subject. Ultimately, one felt that the shell of the theme and not the spirit had been caught.

With all this, one applauded the immaculate dancing, the group discipline, the perfect formations, the flawless entrances and exits, the meticulous technique and highly articulated “araimandi” of the dancers, not forgetting the simple white and gold costumes, for the most part, which went with the theme beautifully.