A posthumous book about the late actress celebrates her illustrious career and the person Sridevi was. 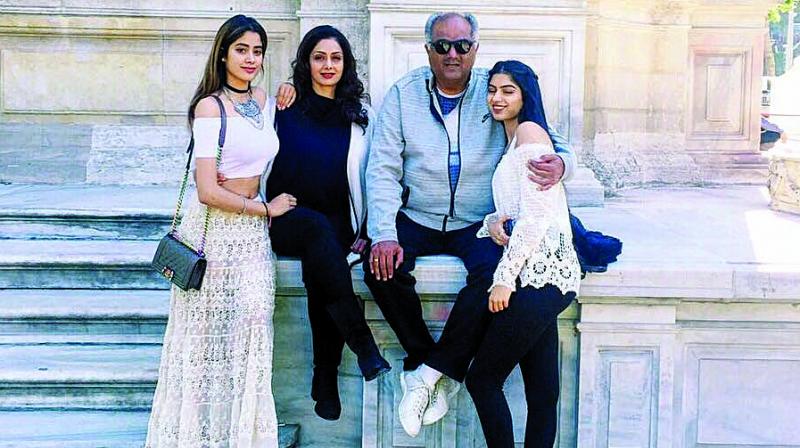 Janhvi, Sridevi, Boney and Khushi Kapoor during their vacation

“It was on a Sunday that the world woke up to the death of Marilyn Monroe. It was on a Sunday that it woke up to Princess Diana’s passing and it was the Sunday of February 25, 2018, when the world wokeup to the tragedy of Bollywood’s first female superstar Sridevi’s sudden demise the previous night. For Sridevi, loneliness was her biggest fear and death hadcome to her when she was alone. The demise of an intensely private woman hadbecome a public vaudeville,” writes author Satyarth Nayak in his book Sridevi: girl Woman Superstar, which celebrates hershining cinematic journey as an actor.

Through the book, Nayak gives a sneak-peek into the life of the most secret superstar of all time. “I am her admirer for many years and wanted to write a book about her because it’s unbelievable that there isn’t a book on a star like her,” says the screenwriter-turned-author who initially planned to write the book when Sridevi was alive and had completed 50 years in the industry in 2017. “But she said she wants to give all her time to Janhvi’s debut with Dhadak and only after that, she can take this forward,” he adds that when she passed away, it was Boney Kapoor who encouraged him to write the book. “I thought I owe it to her and the only difference was that I had to add that last chapter for her instead,” rues the author revealing that the last chapter deals with the details of her untimely death.

As he delves into her childhood and career, Nayak litters the chapters with personal anecdotes from people close to her. For instance, Sridevi’s close friend Kausar Muni remembers the time the late actress had a childlike joy when she took public transport backhome. She had gone for lunch with Muni and the two women took an auto-

rickshaw ride. “She got excited like a child and instantly agreed. They were giggling throughout the ride. The auto guy didn’t even realise in the dark who was sitting in his vehicle. Sri kept laughing and telling, “Don’t tell Boney-ji; he’ll freak out!”

One wonders if the actress, who has donned innumerable avatars through her career, ever got to be who she truly was. After her demise veteran film director Ram Gopal Verma, tweeted that the actress was sad in her personal life and was completely different from how the world perceived her. The book, however, negates Verma’s claim. Noted philanthropist Pinki Reddy, who was also very close to the actress, had reiterated that the actress was in the best phase of her life. “She was very happy and living the best phase of her life as her second inning was going well and Janhvi was to debut with Dhadak. She was in the best of her health,” Satyarth reiterates what he had known from Pinky Reddy.

In the opening chapters, the book brings out a weakness that Sridevi battled for almost all her life — speaking in English. Missing out on education due to her film career also seemed to rankle the actress a bit. Actress Suhasini Maniratnam, remembers how Sri would feel a little inadequate and would playfully taunt her sister who was more proficient in English than her. It was this inadequateness from her personal experience that came out so well in Gauri Shinde’s English Vinglish.

Nayak reveals how Anil Kapoor and Boney Kapoor wanted her for Mr. India and paid a lakh extra to her mother. Anil who had worked with the late actress in a number of films remembers in the book, “Shekhar Kapur(director) wanted her to cry her eyes out but Sridevi had refused. Displaying the thinking actress that she was, she had pointed out that since Seema had been at constant loggerheads with the children, she would suddenly not start wailing buckets over their misery. With Sridevi raising the bar in every scene, she was also making her co-stars act better.”

As an actor, she changed the narrative for women in Indian cinema. She reclaimed the authority that had been denied to the actresses for long time. And as Kajol writes in her foreword, “She is the first womansuperstar of this country. I don’t think any other leading lady could have given Amitabh Bachchan a ‘takkar’ in Khuda Gawah (1992). Besides her, I don’t think anyone else could have matched him. She was formidable in her movies. In my head, she continues to remain a formidable force. Even at the risk of sounding like a fangirl, I must add that the memory of Sridevi will always dominate Indian cinema.”