The one whom he now leaves behind the spotlight to will be the Duchess of the Sussex, who is essentially our Megs. 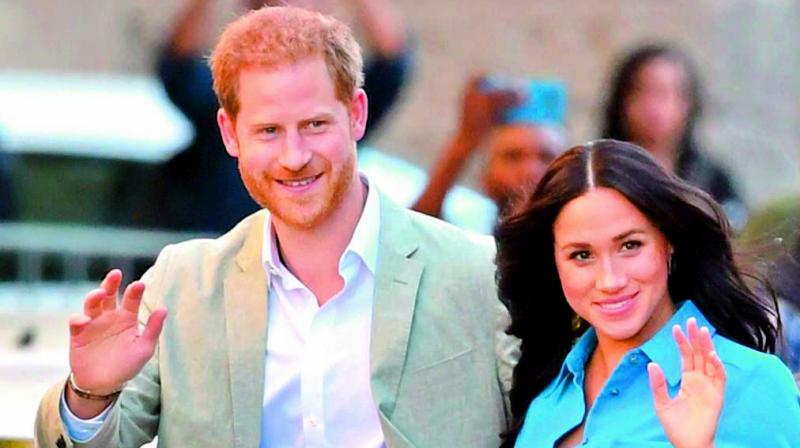 Meghan Markle will soon be happily laughing all the way to the bank. She is going to use her royal status and her ex-Suits star trump card as much as she can, to be earning in billions — as queen of the celluloid. May we say, her worries are gone with the Wind(sor)!

Dump Archie’s bottles. The only bottle worth milking right now is all the commercial/public appearance deals coming to Meghan Markle, who quite frankly lost her sparkle amongst the British commoners for being so forthright and bold.

Meticulously calculating her every micro move since she got back from Canada, where she and Harry with their little Archie spent Xmas, Megs decided to go directly to the Canada House, the Greek Revival building on Trafalgar Square in London, on her return. There, she and Harry met the Canadian High commissioner Janice Charette before throwing egg on the monarch and the British public by declaring that the couple have decided to step back from their royal duties.

Like, hello? Did anyone get the memo of this news information? Everyone believes no one did. Not even the Queen Mother or Prince Charles! It was only minutes before their declaration that they even made the news worldwide via their official Instagram page.

Come to think of it, this whole move was supposed to be a ‘construct’, having been designed as swiftly as Elton John’s private jet-which they use frequently for their jaunts across the globe. Ten months, that’s how long it took them to make such a bold and feisty decision.

Sure, it isn’t easy to handle as much criticism for being a multi-cultural first lady of the world. But it would be totally delusional of Megs to think she wouldn’t receive this level of colour discrimination especially in the one place in the world, which still prides on being ‘white’.

In Britain, however tourist-friendly they are, a large part of the ‘princely’ country is still orthodox on such matters despite all the other controversies they’ve had to deal with owing to the royal family’s …ahem!... colourful lives.

The harried little prince
What’s more, Prince Harry, no matter if he takes up ‘odd’ jobs to fit into the role of being financially able, will always be known as the sixth to the throne of the most prestigious and rich royal family in the world.

The one whom he now leaves behind the spotlight to will be the Duchess of the Sussex, who is essentially our Megs.

She definitely knows what’s up. She knows that Prince Harry, however, wild he was in the past-often caught doing the most notorious activities, including wearing a Nazi uniform to a fancy dress party-has a very soft heart and is still affected by the death of his late mother, Princess of Wales, Princess Diana, the people’s Princess.

Also, Harry’s relationship with older brother William went south after Wills told him that he and Megs were headed too fast in a relationship and that he should take time to marry the lady of his dreams. Harry began distancing himself from his closest confidante.

When an interviewer asked him about his current relationship status with Wills, Harry answered, “Inevitably stuff happens. We’re certainly on different paths at the moment, but I’ll always be there for him.”

Majestic freedom
All that being said, the one who has finally broken from the usual Brit stiff upper lip has not only found voice but also a voiceover deal with Disney to benefit the wildlife conservation charity, Elephants without Borders, a whopping voiceover deal, at that — during her South Africa visit. In her interview, Megs was near tears, telling the interviewer that what she was going through was something very real. “Thanks for asking because not many have,” did she say?

Now, Meghan will not only be happy but also be soon happily laughing all the way to the bank. Going by her smarts and not-only good looks, she is going to use her royal status and her ex-Suits star trump card as much as she can, to be earning in billions. (Hey! Why stop at millions, right?) However, poor Harry might be relegated to playing the role of her “manager”, juggling between managing to bring up the baby in a Brit/American manner and playing spot-boy to Megs as she jingles before the lens to ring in more moolah.