Let's hope the rest of the world has been watching, and learning, and growing ever more accepting. 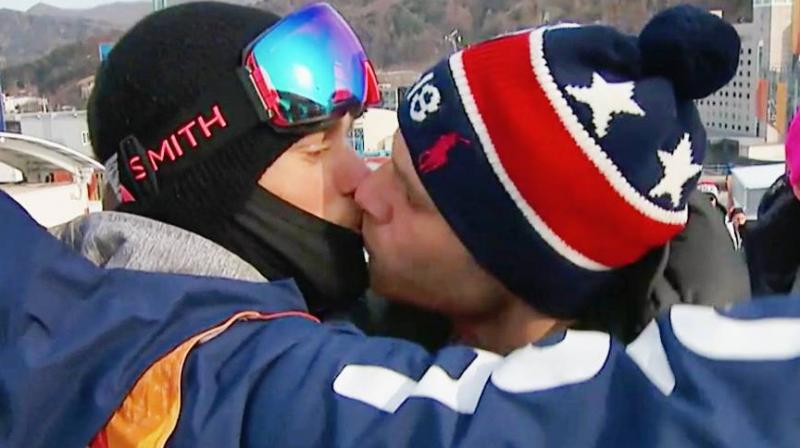 Gay athletes have made their presence felt like never before in Pyeongchang. (Photo: Twitter/GusKenworthy)

They are the stars of the Winter Games, and not for what they've done on the ice and slopes.

Gay athletes have made their presence felt like never before in Pyeongchang, from feuding with a world leader to openly displaying their affection with a simple kiss.

Let's hope the rest of the world has been watching, and learning, and growing ever more accepting of the idea that love comes in all shapes, sizes and genders.

But especially, let's hope that someone in one of the major professional sports leagues — the ones staffed with men — has finally been inspired to open up about his sexuality while still in the midst of a locker room or clubhouse.

American figure skater Adam Rippon got the ball rolling by calling out Vice President Mike Pence for his past opposition to gay rights and same-sex marriage .

On a more personal level, Rippon hopes to be a role model for those struggling to come to grips with who they are and how they may be accepted by others.

"Being out and being visible can help make the journey a lot easier for somebody else," he said. "I didn't have any role models. I didn't have anybody to look up to. I didn't feel like I belonged. And I told myself as I was older, if I ever had a chance to share my story, I would, and being gay is just something I am."

No one made a bigger impact than U.S. freestyle skier Gus Kenworthy .

Before competing in the slopestyle, Kenworthy shared a tender moment at the bottom of the hill with his boyfriend, Matt Wilkas.

It was caught on camera .

"That is the kiss heard round the world," said Molly Merryman, director of the Center for the Study of Gender and Sexuality at Kent State University in Ohio.

Kenworthy didn't realize that a peck with his boyfriend would make such a splash .

Upon further reflection, he recognized the significance.

"My childhood self would never have dreamed of seeing a gay kiss on TV at the Olympics but for the first time ever a kid watching at home CAN!" he exclaimed on Twitter. "Love is love is love."

While the LBGT community has made huge strides in recent years, there's still one major hurdle that has not been cleared.

No athlete has come out while playing — and we mean, really playing — in one of the four major U.S. sports leagues.

Longtime NBA center Jason Collins revealed he is gay in 2013, but he was at the end of his career. He played only 22 more games in a backup role before retiring.

Michael Sam disclosed his sexuality at the end of his stellar college football career, becoming the first openly gay players drafted by the NFL in 2014. But he was cut by two teams and never played a regular-season game.

Coming out clearly took a toll on Sam, who announced just a year later that he was quitting football for the sake of his mental health.

It was not an encouraging sign for anyone who might've been giving thought to following his lead.

"There is definitely a stronghold of masculinity (in professional sports), and it keeps in check what is viewed as abhorrent sexuality," said Jeffrey McCune, an associate professor of women, gender and sexuality studies at Washington University in St. Louis and author of "Sexual Discretion: Black Masculinity and the Politics of Passing."

The challenges are even greater for gay people of color, he added.

"Overwhelmingly, the visibility of gay or queer athletes comes from largely white American athletes and white European athletes," McCune said. "The pressure that already exists for black women and black men, Latino women and Latino men ... is almost a double pressure. They're already visible as black athletes or Latino athletes or African athletes. Just imagine if you add sexuality to that, and the way is it still used as a stigmatic force within the world culture."

The Olympics, too, are a fleeting moment.

Most of these sports — and the athletes who play them — will be forgotten as soon as the flame is extinguished.

That's why it's so important for someone in the NFL or NBA or Major League Baseball to pick up the torch.

Merryman believe sports is "at a tipping point," but she's also realistic.

"Pro athletes have agents. They have entire industries around a single individual. There are people whose cash flow depends on athletes getting a lot of endorsements," she said. "I'm sure they're getting a lot of advice not to come out."

But, she added, "It's coming soon, definitely in the next decade ... when individuals doing the advising realize that it will not be a significant liability — and, in fact, could propel someone to even greater fame and greater endorsements."

In South Korea, the party will be over in a few days.

Let's hope the influence of these amazing athletes — inside and outside the arena — carries us to even greater heights.