People should not ignore the candidate: Milind Deora

In a rally held at Parel, Milind Deora talks to us about the support he recieves, his constituency opponent Arvind Sawant. 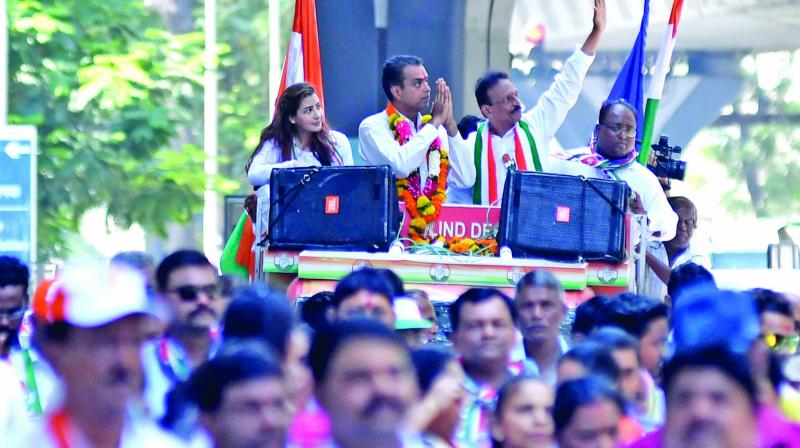 Declared as the President of the Mumbai committee of Indian National Congress (INC) barely a month ago, Milind Murli Deora is already proving out to be the Congress’ trump card. (Photo: Rajesh Jadhav)

Declared as the President of the Mumbai committee of Indian National Congress (INC) barely a month ago, Milind Murli Deora is already proving out to be the Congress’ trump card. The politician, who is also contesting the Lok Sabha elections from South Mumbai constituency recently created a stir when the affluent residents of the area Mukesh Ambani and Uday Kotak endorsed him in a video released by the 42-year old politician on Twitter.

“Milind is the man for South Mumbai,” echoes the voice of billionaire industrialist Mukesh Ambani, but one can’t help wonder why the industrialist, who is known to enjoy a hand in glove relationship with the leaders of the Bharatiya Janta Party (BJP), would endorse a Congress candidate in the country’s economic base.

“The support that I have received is from all the quarters, all people, and I am grateful to everyone from large industrialists to small traders to even a small paanwaala who employs one person. To me, they are all equal contributors to Mumbai’s economy and city’s commerce. I hold all their support in equal regards,” says a rather diplomatic Milind while helming a rally in the Railway Colony of the Parel area.

Finding his way through a sea of supporters at his morning rally held under the scorching April sun, the Congress leader who had previously enjoyed a decade long (2004-09 and 2009-14) stint as the MP, returned to the area dominated by his opponent’s party. The threat of Shiv Sena’s Arvind Sawant, who is the incumbent MP from the constituency, appeared paltry as the supporters regaled, ‘dakshin Mumbai ki aan, baan shaan – Milind Deora’ on the roads.

As the rally passed through the by lanes of the area, onlookers and passersby stopped to take notice of the convoy. “I will support Milind Deora because he is a good candidate, and he has good qualities and everything, says Namrata Tewari Pinto, an onlooker. Her husband Avellino Pinto was quick to add, “He has a very good background like his father. There were never any scams with his father or with him.” Although, Namrata confesses sheepishly that she would want Prime Minister Narendra Modi to be re-elected for the second term.

“He (Milind) will not face any issues this election because the present khasdaar (MP) is nowhere to be seen. Since he got elected, not once Arvind Sawant visited us. So the people’s attitudes have also changed and they have become more inclined towards Milind Deora,” says an excited Santosh Chavan, President of the Congress party of ward 204. The shared complain of Sawant’s prolonged absence found a common surface for Milind to infer anti-incumbency against the former. “It’s a fact — Sawant has absolutely been absent; he has only been living in Delhi. An MP needs to balance Delhi and his constituency. Even I had high expectations that he would do something, especially in this area that is a Shiv Sena stronghold, but he has failed in this area. I see a lot of anti-incumbency against him,” says Milind before heading off to greet a conglomerate of women gathered outside the United Mill No.1 Chawl.

As the tall suave politician disappeared among the greeters, a group of people discussed the celebrated legacy of his father that Milind is ‘carrying on’. The late Congress leader and former Union Minister Murli Deora was a beloved leader who enjoyed a great rapport across the political and corporate spectrum, including the Ambanis. “When his father was the khasdaar, South Mumbai was doing well. And even when he was there, it was faring well. He is exactly like his father,” says the Mumbai Secretary of Nationalist Congress Party (NCP) Swati Mane, who was present in the rally to represent an alliance between Congress and NCP. Chavan too expects Milind to fit into his father’s shoes as he says, “His father gave MHADA houses to the mill workers, so obviously people will like him as well. And he is going to give 500 sq.m houses; he has said that to Rahul Gandhi in a meeting at BKC.”

In addition to his immediate opponent Sawant, Milind is looking to eventually battle the seeds of the alliance of Shiv Sena - BJP. The stark turnout of Maharashtra Navnirman Sena (MNS)-mufflered-men tells the tales of the animosity towards BJP. “Raj saab has said not to support anyone who will benefit from Modi and Shah.

Here, the candidates are Shiv Sena and Congress, so we are supporting Milind Deora from Congress. We are just following what Raj Thackeray saab has asked us to. For us, whoever is against Modi and Shah, our support is with them,” says an assertive Nandkumar Chile, a memeber of MNS.

As the convoy moved ahead passing on the business-fuelled old roads of Lalbaugh, the slogans resounding the area insist that the ultimate befitting answer to GST, demonetisation, chowkidaar and bhaagidaar is ‘hath tha panja (the symbol of hand)’.

“South Bombay is largely about enterprises and commerce. Everyone is associated with some of the other form of enterprises or commerce that is connected with the country’s economy, and everyone is hit by the government’s policies in the last five years. And people will not vote blindly for Modi the way they did in 2014. I am appealing the people to look at the candidate and compare their record and mine. Know what he stands for because today nobody knows what he stands for; what’re his views on economy or foreign policies, development, inclusion and women’s rights.  No one knows and people should not ignore the candidate, they need to look at the candidate as well,” concludes Milind.