Flamboyant chef Massimo Bottura, owner of the restaurant, described the feeling of hovering around the top spot in recent years 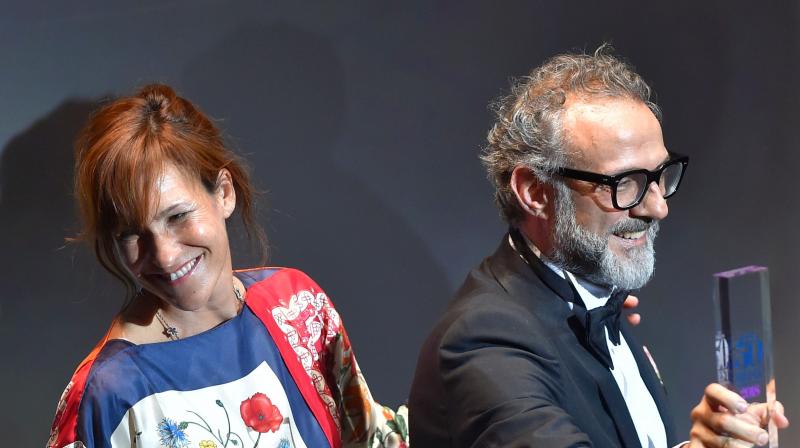 Italian chef Massimo Bottura (R) celebrates next to his wife Lara Gilmord after receiving the Best Restaurant award for his restaurant L´Osteria Francescana during the World's 50 Best Restaurants awards in Bilbao on June 19, 2018. (Photo: AFP)

It was the second time in three years the restaurant, which serves up modern Italian fare in Modena, in Italy’s northern gastronomic heartland, has headed the list, entries on which are now as coveted as Michelin stars. Organizers said Osteria Francescana combines “nods to tradition with fierce modernity, philosophical conceptions with old-fashioned flavor, warmth with daring”.

Flamboyant chef Massimo Bottura described the feeling of hovering around the top spot in recent years. “My heart has held up despite it all, I think it’s a strong heart ... after all these years number two, number one, number one, number two,” he told a news conference in Bilbao, Spain, where this year’s event was held.

Places on the roster, created by William Reed Business Media, are based on a poll of more than 1,000 chefs, food critics and other industry experts around the world. All three top slots were taken by European eateries. El Celler de Can Roca, presided over by three brothers in the Spanish region of Catalonia, nabbed second, and Mirazur, run by an Argentine-Italian on the French riviera, came in third.

Last year’s winner, Eleven Madison Park in New York, slipped to number four, but goodies like a sturgeon and caviar cheesecake kept it rated the best restaurant in North America.

Kolkata-born chef Gaggan Anand’s eponymous restaurant in Bangkok, where diners are presented with a menu of emojis to give clues to the morsels they eat mainly with their hands, was the only Asian entry in the top 10, at number five.

Peru, which has become a dining destination partly thanks to the variety of ingredients which can be produced on its diverse terrain, was featured twice: a contemporary take on rare ingredients put Lima’s Central in sixth, one slot ahead of Japanese-Peruvian fusion outlet Maido.

Three Michelin star-holder Alain Passard at Parisian institution Arpege was ranked eighth, with special mention reserved for the fresh vegetables grown on the chef’s own farms.

Flying the flag for the Basque region around Bilbao was Mugaritz, which organizers compared to a research laboratory for the innovation and creativity that goes into its 20-course menu. Nearby Asador Etxebarri, where even ice cream is barbecued over home-made charcoal, rounded off the list at number 10.