The scenes between the Christians and the dalits are hilarious, neither understanding the other. 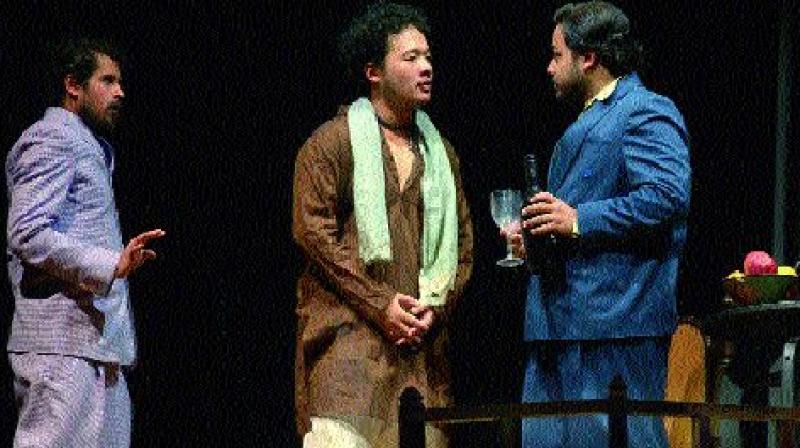 The actors moved with ease amongst the different levels of the set and easily conveying their impressions of light and dark moods.

Asif Ali a teacher at the NSD presented Amritlal Nagar’s novel, Nachyo Bahot Gopal, adapted as play by him with the first year students of the NSD. A trained actor and an evolved director and playright, Ali did justice to this huge and complicated novel. The novel talks about dalits, the caste system and its dehumanising qualities, often equating dalits with the female gender.

The story revolves around Nirguniya. Born in a Brahmin family and married to an old man, Nirguniya falls in love with a mehter (sweeper) who comes to clean the toilets at her home. She runs away with the man and later gives birth to a baby girl, whom she gives away to a Christian family (in the last act). Nirguniya gives all her jewellery to the Bishop for safekeeping.

While living with the sweeper, Nirguniya learns the craft of mehtargiri. Meanwhile, her husband is caught by a dacoit and made a member of the gang that he finally leads. And when he returns it is with the wish of becoming a Christian. The scenes between the Christians and the dalits are hilarious, neither understanding the other.

Nirunguniya is portrayed as a girl of loose moral fabric in the story. She first falls for the son of the family where she was staying and then with her teacher. She then gets married and falls for the dalit man.

The set was designed by Sandeep Bhattacharya and lit by Souti Chakraborty. It was a double-storey set with multiple areas of light and darkness.

The actors moved with ease amongst the different levels of the set and easily conveying their impressions of light and dark moods.

Shilpa Bharti as young Nirguniya acted well. She was emotionally sensitive to the changes in her life.

The elder Nirguniya was played by Smriti Mishra who was dignified and carried an independent mien, especially when dealing with Brahmins. She does not deny her background nor the fact that she was an alcoholic, much to everyone’s shock and surprise.

Asif Ali directed the first year students with care and adroitness. He was helped in his task by Vandana Vashisht, another NSD alumni. Kajal Ghosh’s gave the music while costumes were done by Kriti V. Sharma.

The writer is a theatre-critic