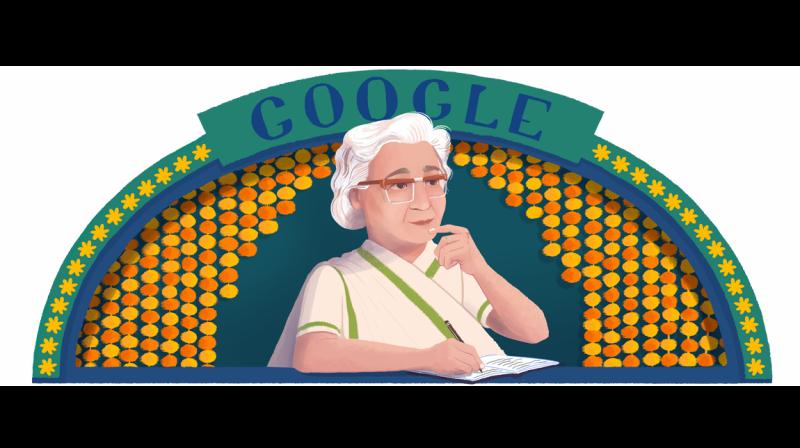 Chugtai was awarded the Padma Shri by the Government of India "in recognition of her literary accomplishments and her fearless dedication to her beliefs."

Google Doodle on Tuesday celebrated what would have been the 107th birthday of Indian author Ismat Chughtai.

According to Chughtai’s family, she was born August 21, 1911(contrary to most published reports, which cite her birthdate being four years later, in 1915). The ninth of ten children, Chughtai grew up in the north Indian state of Uttar Pradesh.

She began writing at an early age, inspired by her elder brother Mirza Azim Beg Chughtai, a novelist known for his playful humorous works.

According to Google, Her short story “Lihaf” (The Quilt), narrated in the voice of a young girl, was viewed as controversial given its portrayal of a relationship between an upper class woman and her servant. This was also the case for another of her famous stories, “Gainda” (Marigold), which told the tale of a domestic worker who falls in love outside the caste system. Chughtai’s character violated the rules prohibiting different castes from associating with one another, as well as the social custom forbidding widows from pursuing a second love.

With a large body of works, Ismat Chughtai established herself as a significant author in the realm of 20th-century Urdu literature.

Chugtai was awarded the Padma Shri by the Government of India "in recognition of her literary accomplishments and her fearless dedication to her beliefs."

The doodle itself shows Chugtai, sitting in the act of writing while a 'lihaf' of 'gainda' (a quilt of marigold) surrounding her.