The thematic underground bunker museum will be open to the citizens by the end of this year. 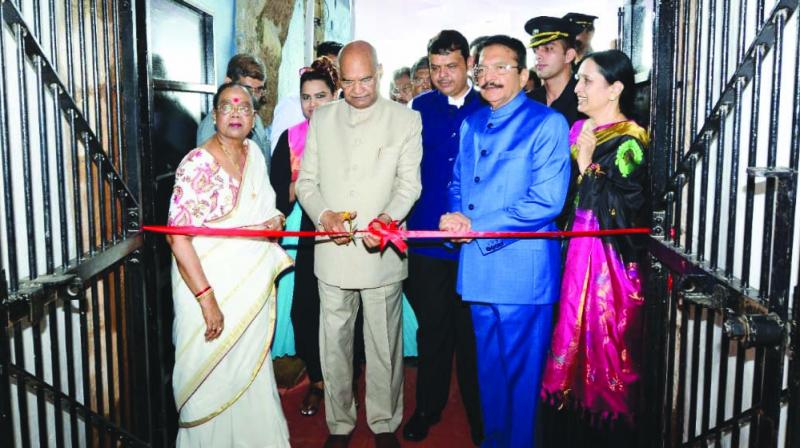 After three years of restoration work, the museum is all ready for public viewing and on Monday, President Ram Nath Kovind in presence of the Chief Minister of Maharashtra Devendra Fadnavis and the Governor of Maharashtra inaugurated the museum.

The city of Mumbai is teeming with historically significant structures, but due to a lack of conservation efforts, several of them have fallen into disrepair. But this isn’t going to be the fate of the historically significant 13-room underground bunker at Raj Bhavan as after being successfully conserved and restored, it will now be open for public viewing. Spread across 15,000 sq ft, the bunker is believed to have been built ahead of the First World War and was sealed in early 1965 due to security reasons. In an extraordinary search, the present Governor of Maharashtra CH. Vidyasagar Rao rediscovered the British-era underground bunker in 2016, only to restore it with all its heritage features.

After three years of restoration work, the museum is all ready for public viewing and on Monday, President Ram Nath Kovind in presence of the Chief Minister of Maharashtra Devendra Fadnavis and the Governor of Maharashtra inaugurated the museum.

“While restoring the bunkers, we have ensured that the sanctity of the heritage structure was maintained,” says the Governor. Once we enter inside the bunker, we notice small to long passages and several rooms on either sides, some of which have been turned into virtual reality booths. The booths are based on the themes of cannon-firing experience, history of Raj Bhavan and a glimpse of the forts of Maharashtra, through which one time travels to the 19th century. “The use of virtual reality booths will tell the stories of the freedom movement,” informs the Governor. The thirteen rooms are of different sizes and bear names like Shell Lift, Pump, Central Artillery Store, Workshop, among others. The tunnel opens to a 20-ft tall majestic gate towards the entrance and the structure resembles a fort, making it an ideal underground museum of history.

With an intention to engage the citizens with the state’s past, the bunker museum presents a distinct example of changing construction technologies. With the stone masonry walls of about three-feet thick at its northern side tunnel, the trench also proves to be an interesting conservation exercise of the layered history of the site that is surrounded by landscapes and neighbouring bungalows. “By opening the bunkers to the citizens, we are keen to engage them with our proud past,” says the Governor.

Since the bunker accommodated the storage of artillery and the site was a platform for defense, the overall goal for the team was to conserve the integrity of the site and return its essential features to their original functions. Having remained closed for nearly six decades, the bunker had suffered extensive wear and tear due to seepage from the overhead lawn. “There was a need to conserve the bunker in a way that it didn’t compromise the safety of Jal Bhushan – the office and residence of Governor – that lies above the tunnel. At the same time, we wanted to provide an opportunity for people to visit the historic site. As of now we are developing several new features before it finally opens for the public,” shares Umesh Kashikar, the public relations officer to the Governor of Maharashtra. After several structural audits, along with adequate waterproofing and grouting, electrification, air-conditioning, the bunker is ready to be opened to the public.