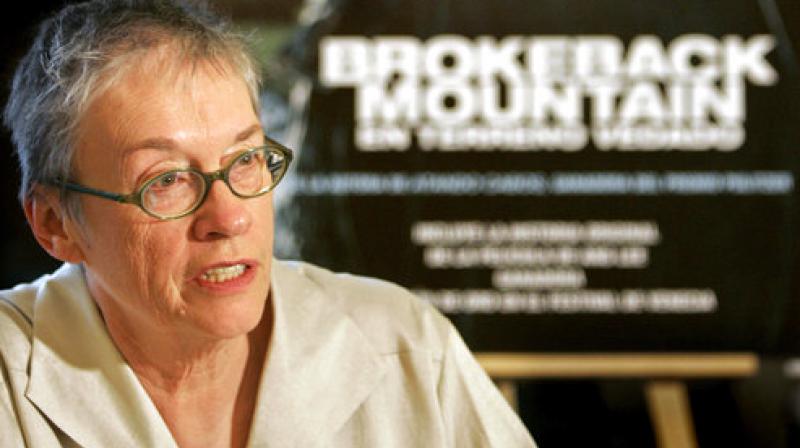 In this Jan. 26, 2006, file photo, writer Annie Proulx speaks at a news conference in Madrid. Proulx, whose works range from “Brokeback Mountain” to the Pulitzer Prize-winning novel “The Shipping News,” will receive a National Book Award for lifetime achievement. (Photo: AP)

"I was astonished when first I heard that news," Proulx told The Associated Press during a recent email interview. "I simply had not thought of my various writings as a body of work that might be considered as a contribution to American letters. It almost seemed that I had been negligent in writing what I considered discrete novels and stories instead of shaping a holistic something that might be regarded as a life work."

On Thursday, the National Book Foundation praised the author of "The Shipping News," ''Brokeback Mountain" and other fiction for her "impressive lyricism and wit that captivates readers of all ages." Anne Hathaway, who starred in the film version of "Brokeback Mountain," will present the Medal for Distinguished Contribution to American Letters to Proulx during a Nov. 15 dinner ceremony in Manhattan, when competitive prizes will be given for the year's best fiction, nonfiction, poetry and young people's literature books. Scholastic Inc. President and CEO Dick Robinson will be given the Literarian Award for "Outstanding Service" to the literary community.

Previous recipients of the Distinguished Contribution medal include Toni Morrison, Philip Roth and Joan Didion. "Annie Proulx's ability to explore the nuances of the human spirit and render deeply moving reflections on rural life have solidified her place in American Letters," Lisa Lucas, the foundation's executive director, said in a statement. "In addition to her astounding literary accomplishments, film adaptations of Proulx's work have reached scores of viewers who may not have encountered her work on the page."

Proulx, 82, won the Pulitzer and National Book Award for "The Shipping News," and her novel "Postcards" made her the first women to win the PEN/Faulkner award. She has also expressed reservations about literary prizes, worrying that they overshadow the work. "It is true that I have noticed awards sometimes affect writers negatively by encouraging them to weigh their succeeding works on a scale of notability rather than intrinsic verities in the work itself," Proulx told the AP. "That's badly put: I feel writing the thing on the worktable should have the focus, and that awards should come like shifts in a veering wind, as gratifying surprises."

Born Edna Ann Proulx, in Norwich, Connecticut, the author has lived everywhere from Vermont to Wyoming to Seattle, and set her work around the country and beyond. "The Shipping News" takes place in Newfoundland, "Brokeback Mountain" in Wyoming and her latest, the ecological epic "Barkskins," begins in Canada and journeys worldwide. "Barkskins" warns of climate change, which Proulx considers a defining issue of the moment and one "impossible to ignore" in her future work. But she is also known for her explorations of history, whether the haunting secrets of a Newfoundland community in "The Shipping News," or, in "Accordion Crimes," when she traces an accordion's journey from Sicily in the 1890s to Florida a century later.

"For reasons I have never understood the past has always had a hold on the way I look at events. I am attuned to long, slow change," she wrote to the AP. "Throughout my life I have slid in and out of gestalt reversals, imaging earlier times for almost every situation, not only when writing, but in the normal course of a day - the Viking presence in L'Anse aux Meadows, the peopled steeps of Chaco, the funerary rites of 19th C. Vermont, the lustrous eyes of unwary pronghorn, standing on the quivering false islands of Okeefenokee, spider-webs in Pacific Northwest autumn forests. If I met you I might briefly imagine you in 18th century clothing or the raiment of Utzi or pharaonic trappings.

This habit of thinking/imagining is hard to explain, but it is a kind of automatic juxtaposition of specific present situations and people into the past. I do this constantly, in every social interaction and sometimes write about the past through that channel of imagination."

Lifetime achievement awards are a time for stepping back and looking at the impact of one's career - one's legacy. "I usually write about rural places and situations and am drawn to socio-historical change as background (or foreground, depending on your perception)," she wrote in her email. "The French Annales approach to history through the lives of ordinary or working class people has guided my outlook. In the work structural backgrounds have included the disappearance of Vermont hill farms, immigration, homophobia, the shift from traditional rodeo, returning veterans, the incursion of hog farms, the collapsing Newfoundland cod fishery before the Moratorium, deforestation.

"How this all shakes out into a legacy I have no idea - it's more a defining characteristic of the way I look at the world I have lived in. I feel writers have a responsibility to nail down a piece of the time they inhabit.