I wanna be a millennialaire

It's time to stop thinking that millennials are spendthrift and irresponsible with their dough. 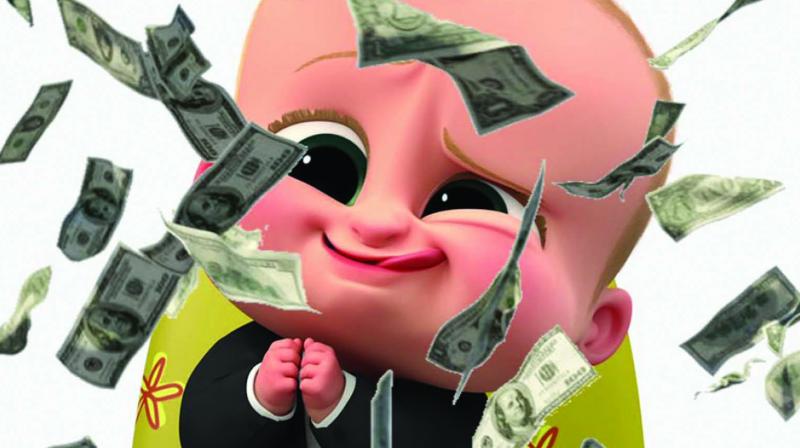 A still from the film Boss Baby.

By the time Jaideep Misra had turned 21, his pocket money saved throughout the teenage years had reached a decent figure. So, what did he do next? Buy the newest Playstation console? “I took the money and purchased stocks. Some were low-risk, others high-risk, but I did some thorough research beforehand. I thought of broad and short-term goals, and acted accordingly. After all, money multiplies over time. And I had to find a good multiplier that was sensibly done and worth the risk,” he reveals.

Not really the kind of shop-talk you hear from the ‘lousy’, privileged millennial kid, right? Except, contrary to popular belief, gen-next is quite financially educated for their age. They may be splurging, but boy, they know how to save and invest.

Take, for instance, Karan Chhabra, who presently runs a successful telecommunications startup. Even when he was in the eighth grade, he convinced a school friend’s father to invest in a Gelato Vinto franchise. Entrepreneurship was the dream for Karan and he started putting his money where his mouth is by the time he was 20. And, yet, he feels, he wasn’t too young for “any of it”. The entrepreneur continues, “It’s all about group mentality. You see that someone else is doing better than you and you wonder, can’t I? If you visit Youtube, you’ll find startup stories of thousands of people pop up. The startup ecosphere is filled with young people, who are treated seriously.”

Karan has early exposure to the Internet to thank for making him believe that what he intended to do was achievable. He continues, “Even today when I’m working 12 to 13 hours a day, I spend more than 1.5 hours on Youtube. The Internet is a big place. You can either waste your time or you can learn a lot. I’d say, if there was no Internet in my life I would have learned nothing at all.” Similarly, Jaideep has spent more time on websites like Investopedia than he has on Wikipedia.

Studies back this financially healthy behaviour: as per Schwab’s 2018 Modern Wealth Index, about one-third of millennials said that they have set their financial goals and even put a plan to paper. Even Gen-Xers (born 1965-1980) and baby boomers (born 1946-1964) don’t plan as well (one in five, in both cases).

Punisha Sangla, a 23-year-old corporate employee, adds another dimension by saying, “We have more nuclear families now, which pushes people for early financial independence. I would say that among my friends in four-member familial set-ups, most have made a smart investment in gold (as its value is always going up) or opened a fixed deposit (FD), as in my case. I convert exactly half my salary into the deposit, as I want to save for when I’m 55 or so.”

And, yet, there is definitely one point for which youngsters have their parents to thank. Mayank Bansal, another millennial, has made good money investing in shares. He says, “Even when I took `50,000 from my parents, I did it with the thought process that even if I lose the entire amount, it isn’t a big deal as I have my family’s backing. My father will support me if need be, and that enables me to continue investing, and not back out at all.”

And that aspect works well for the fundamental rule of finance: you’ve got to spend money to earn money. These days, parents are trusting their children more, while the children themselves are aiming for the skies. And this is all despite the lack of financial education in our country. On this, Rohan Jolly, who works at a think tank, opines, “no one can become successful without having financial literacy. And, yet, why isn’t financial education a part of school curriculums? That’s where the paradox comes in — you’re acquiring the skillset to earn money, but none to understand how many works.”

To that, we say: good thing we have the Internet of all things where we don’t have the right education system. And, thankfully, millennials are not always wasting time on it.