A few chapters into the book, Kher shares an anecdote that has perhaps, shaped the man he is today. 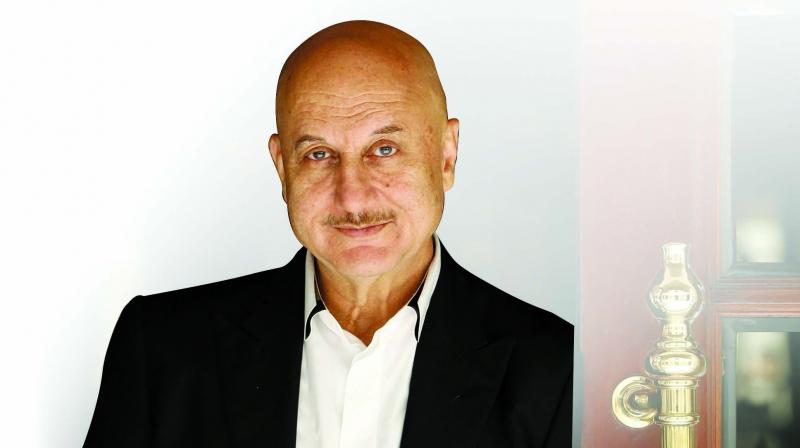 In 2009, when Anupam Kher was approached for a minor role in Woody Allen’s You Will Meet a Tall Dark Stranger, he was willing to do it for free — just to engage with the auteur in a professional capacity. Once he was through the costume trails, Kher expressed his desire to meet Allen but was curtly turned away as the director was busy with his production. To expedite the rendezvous, Kher decided to visit the designated shoot location, which happened to be close to a Bangladeshi restaurant in the British capital. A desi-at-heart, Kher dropped in for a meal and was soon flanked by the staff and patrons of the modest eatery, each hoping to get a photograph with the actor. The 64-year-old was instantly struck by a genius plan. He requested his fans (about 30 of them) to gather at the street corner where he would meet them. This inevitably led to a commotion and disrupted Allen’s shoot. Soon, two production managers from the film’s set arrived to investigate the matter. One of them recognised Kher and invited him to the movie’s set. The actor was overjoyed when he was seated next to Allen. “But Woody Allen had no time for me. Not that I had anything, in particular, to say to him. But for me, this was a moment of truth. After the shot, as Woody Allen turned, we were face to face with each other. I said ‘Hi’. Now, he was forced to reply to me. ‘Hi, I am told you have done a lot of movies.’ I replied: ‘Yes, 418.’ He paused, looked around and asked: ‘In how many lives?’. That was it. I got my Woody Allen moment,” he writes in his recently published autobiography Lessons Life Taught Me, Unknowingly, developed from his long-running autobiographical play Kucch Bhi Ho Sakta Hai. It has selected platitudes from his formative years in Shimla, his quirky joint family and his multifarious film career. Kher wanted his book to be “inspirational”, and not just an account of his life. “I didn’t want to just chronicle my life. I wanted to prove that if you have to succeed, you just have to work hard. When I was a struggling actor, autobiographies of figures such as Charlie Chaplin and Maxim Gorky inspired me tremendously. So I thought, if my life can help people then I should write it,” he says.

The veteran actor does have a lot to share and inspire. In his four-decades-long career, he has featured in over 535 movies across industries, acted in multiple plays, written two books, launched an acting school, apart from representing the Indian film fraternity in the West. That noted figures such as Robert De Niro have famously thrown surprise parties for him is a testimony of the actor’s collective clout and recognition the world over.

A few chapters into the book, Kher shares an anecdote that has perhaps, shaped the man he is today. This incident dates back to when he was in the Class 10. His father Pushkar Nath Kher had treated him to a meal of mutton samosa, pineapple pastry and a cup of espresso at his favourite restaurant. Clueless about the reason behind the celebratory treat, Kher wondered if his father had received a promotion or a fortune. But apparently, it was to bring the news that his son had actually flunked the matriculate exams, which he learnt through a source. His father went on to explain his bizarre response to the unfortunate development. “He said, ‘I did this so that you never forget this failure or any other failure you encounter in your life. I want you to remember that failure is an event, not a person’. Years later, in a scene in Aditya Chopra’s Dilwale Dulhaniya Le Jayenge, we see an improvised version of this anecdote where Kher celebrates his reel-life son’s failure. “I used to tell these stories to Yashji and Aditya. Infact, the names of the people [in the photographs] in that scene are actually my uncles. When the film was about to release, I wrote to them saying ‘please don’t feel bad’ and they wrote back saying ‘thank you for making us world famous’,” he smiles. In his exhaustive filmography, Kher has often dipped into his personal life to draw inspiration for his characters. “The character of the Kabadiwala in Dil was based on one of my uncles while Khosla from Khosla Ka Ghosla was on my friend Vijay Sehgal’s father.”

One movie that is most alluded to in the book unsurprisingly happens to be Kher’s debut — Mahesh Bhatt’s socialist drama Saaransh (1984). Kher, then 28, essayed the role of a 65-year-old BV Pradhan, a retired school principal who’s trying to come to terms with his son’s death. The movie’s success set Kher on a long and fulfilling career. But the actor almost missed out on the role. Bhatt was keen on casting Kher, a decision that wasn’t received well by the film’s producers. They wanted veteran actor Sanjeev Kumar as the lead. On learning he was being replaced and relegated to a smaller part in the same film, Kher stormed to Bhatt’s house and had an outburst. “I have decided to quit Bombay. But I want to tell you one thing before leaving — Mahesh Bhatt, you are a fraud. You are also a cheat of the worst kind. For the past six months, you have been telling me that I shall be playing BV Pradhan’s role. Now, suddenly, you ask me to switch over to a role, which has a very limited scope!” Surprisingly, this outburst convinced Bhatt that Kher was ideal for the part and the rest is history.

In recent years, the veteran actor has been in news more for his political views than his films. “It is both a blessing and a bonus that nearly 35 years later, I am becoming like Pradhan,” he writes. “Today, if I am able to speak up for my country, vocalise what I believe is right or wrong — it is because of what I have somewhere imbibed from BV Pradhan.” His hyper-nationalist comments have often been mired in controversy —from questioning the patriotism of actors such as Aamir Khan to his disapproval of artists signing letters and petitions against the ruling party to his support towards the scrapping of Article 370. “I am very vocal about my political leanings because you have to first live with yourself and then with the world. If you can’t be truthful to yourself, how will you be truthful to other people?” he asks.

He is often trolled for his views on social media, but Kher has mastered the evasive “art of ignoring”. “It used to bother me even before they were officially called trolls and they are everywhere. When I came to Mumbai, I was trolled by struggling actors who would say ‘oh he is a bald guy, how can he think of becoming an actor?’ In the 1980s, thatmeant there wasn’t any chance of making it. But the moment you stop depending on people to like you, you are free. You cannot be popular with the whole world. You only need a few people whose opinions you should value,” he concludes.