In a candid conversation Twinkle Khanna talks about her venture into online content platform, her children and using humour as her defence mechanism. 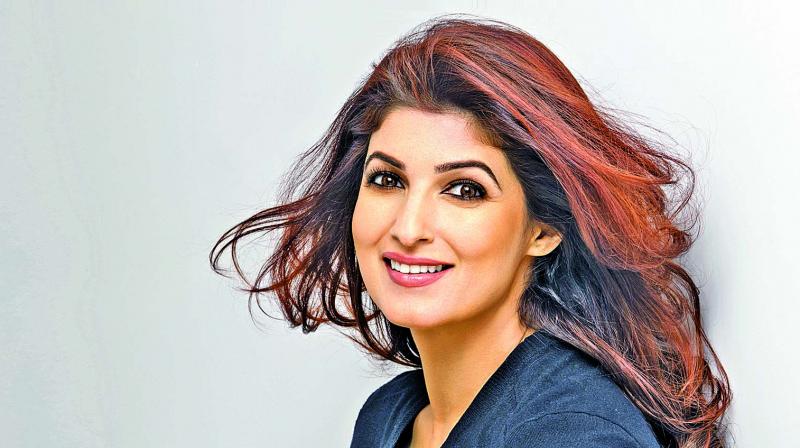 When we meet Twinkle Khanna at her beach-facing apartment in Juhu, she greets us warmly, dressed in a stylish white tee shirt and a pair of blue jeans. Khanna who juggles her multifarious career as an interior designer, film producer and a writer, is adding another feather to her cap with her online content platform Tweak. The idea, she says, has been in her head for over six years.  “When I started writing, so many people wrote me saying there was something that resonated with them. So I realised we all are trying to make our lives easy in a world that is fundamentally lopsided,” says Khanna, who chose the online platform to help women because that fits best to her comfort. And it promises to bear Khanna’s signature stamp of irreverence, coupled with humour, optimism and empathy. “I want to be free and not worry whether my eyelashes are falling off in the coffee. I want to come to work in pair of my track pants. I want to have that freedom to be away from the perceived physical appearances and this was the way to do it,” she shares. The idea is also to lend support to those who are not privileged like her. “When you are able to live life on your own terms, where equality is not your pursuit anymore, you can perhaps lend the hand to somebody who is still in that race,” she elucidates and confesses that she realised this fact much later in her life as she grew up with a single mother and in a household of women where patriarchy didn’t enter in her consciousness.

With two published books and columns that are inherently funny, does she feel burdened to be funny all the time? The columnist breaks into a laugh as she answers, “When I am going on stage and someone announces ‘here is Mrs Funnybones and she is going to make you laugh for one hour’, I feel like dying. People say I am funny but I am just stating the truth, and that’s so rare that you find it funny.” Khanna also doesn’t mind laughing at herself. “I am making jokes on myself, about the world, and at the times when they have made one joke on me, I have made six and that’s the way I function.” she gushes.

At the time when people in the limelight mince their words and feel apprehensive to write on social media, her sharp and sarcastic tweets give way to the pent-up emotions. “If I really sit and think about this, I would never be able to write anything. I say what I need to say and I do this with everything in life. I have to still stick by the things I believe in,” she explains, and adds that humour and satire help her to get her point across in a lighter way. When asked her opinions ruffles feathers at home, she opines that difference of opinions is very important as long as “you are not imposing those on each other”. “That’s the only secret I follow, otherwise you are only going to get into argument. It’s not only between couple but even the world needs to learn to live with the person who is not on the same page as us and that is perfectly fine,” she opines.

Unlike many other B-town star wives, her work completely separates her from the rest. “First of all I don’t think there’s anything like a star wife. You never have doctor’s or lawyer’s wife. You have first wife,” she laughs, “Which is okay, I am really not sure what but star wife is, and whether it should exist in our lexicon. I grew up with very famous parents. My struggle for whole life was to find my own path from the beginning. It is just that along the way, I met someone who was again as the luck-would-have-it is in this limelight but that’s his life, career and it has nothing to do with me. In fact his income also has nothing to so with me. My contribution towards my home and children is an individual contribution,” declares the author. Ask if she is a strict mother and she says, “I can’t be a ‘beta beta’ mother. If my children fall down, I will give them bandage and ask them to run. I am a fuss free mother.”