Strands of life blended with science, spirituality and Sufism

For the exhibition, Vishal developed a series of 14 paintings and nine wall installations/ sculptures. 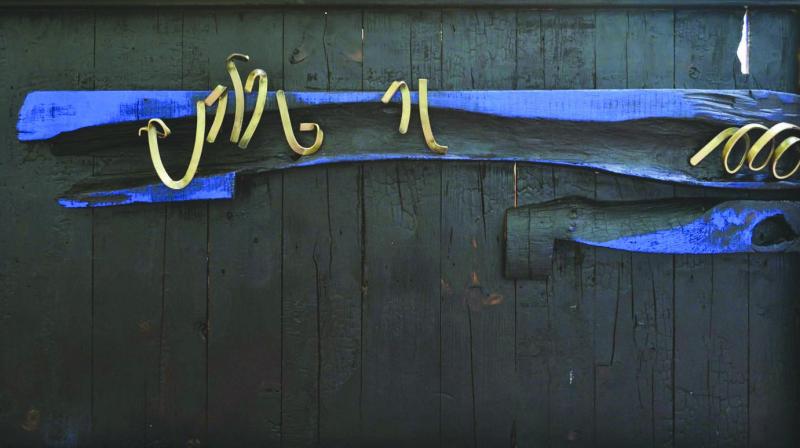 The artworks are about blending colour with geometric spirals that look like deeply built and felt contours.

In the world of art, symbolism is one of the most powerful ways to depict facets of life and death. Artists often choose peculiar patterns and colour palates to evoke strong reactions from the audience. At artist Vishal Joshi’s recent exhibition “Contours”, one could see the amalgamation of various elements like science, Sufism, and nature depicted with spiral strands craved in mixed media. The central story of ‘contours’ revolves around the relative form of spiritual and material life and highlights the highs and lows in the journey of life to discover the ultimate truth which is ‘moksha’. Springing from the depth of spirituality, the artwork series is a personal journey of awakening for the artist, who has worked extensively on this symbol for the past 15 years.

For the exhibition, Vishal developed a series of 14 Paintings and nine wall installation/sculptures using burnt wood, brass and canvas artworks to showcase life in motion. He picked the geometric-inspired theme to depict communication, worship, science, and logic; and, used gold spirals to symbolise ‘Raqs,’ an Urdu word for synchronised dance movement and the Sufi concept of worship. He also describes the strands as generated energy in our bodies derived from the five elements of nature — earth, water, fire, wind, and sky. Speaking about the art, he says. “It is the language of my spiritual journey. In 2010, I did a show called ‘the birth of spirals’, which was a series of installations. I made an egg with fiberglass and created big, small and tiny spirals oozing out of the mouth – the egg was me and the spirals were my expressions. I love using the different medium to express my thoughts, in my previous exhibit called ‘the worthy opponent’ I used heavy wood frames with the gold colour to paint crowns and thrones. For Contours, it took me almost 12 months to complete the 14 acrylic on canvas paintings and nine sculptures using charred wood and brass. During the creation process, the artworks looked perfect to me one day and incomplete the next day – so it was an ongoing meditation and learning for me to collect my thoughts, rethink and recreate till I was satisfied. I believe that every person has a different path to walk, and my path was in the form of spirals. It carries a vast meaning in different mythologies across the world, hence a very important symbol in my entire series.”

Although the artist accepts the brickbats and bouquets about his works in a positive manner, he feels that it isn’t a favourable time for artists to flourish due to censorship on creative freedom and individual expressions. He says, “If someone does not agree with mass, his works get criticized and censored. Most artists use symbolism and metaphoric elements to say what they have to say regardless of public opinion. I strongly believe that every person has a different perspective to look at the same subject so there should be a platform for open discussion between artists and viewers.”

‘Contours’ by Vishal Joshi was curated by Uma Nair at the Visual Arts Gallery, Indian Habitat Centre in New Delhi in the month of October and received a warm response from the art fraternity. Curator Uma Nair, who worked with the artist for the first time was impressed by his work and professionalism. Speaking about her association, she mentions, “I usually look at the artist’s work for at least two or three years before doing a show as a curator. I decided to curate Joshi’s show after I saw the journey and the depth of articulation in his works. I look for the many layers and the rhythms that the artist wants to relate to and translate in his works. Vishal has been a practitioner of art and design for more than 15 years and a serious graphic artist too. He is also an artist who is deep into meditation and his works moved me. That is when I decided to curate his show. Joshi’s work encourages the viewer’s subjectivity to intercede; his paintings should be felt rather than simply looked at empirically. The artworks are about blending color with geometric spirals that look like deeply built and felt contours. Like major and minor musical keys in Raagas, his ability to hone tonal modulations in paint has the ability to evoke sensations of happiness or melancholy in the beholder. Colour is a native element and the spiral echoes ripples of music. The joy of the art of Joshi is the unassuming manner in which he shares his profound and wide philosophical understanding of life in a novel and at times prosaic forms, employing in the process, a rich array of spiral sequences to realize evocations of expression that are universal.”