With every peel of an onion, Mumbaikars are shedding real tears over the rising prices caused due to the monsoon. 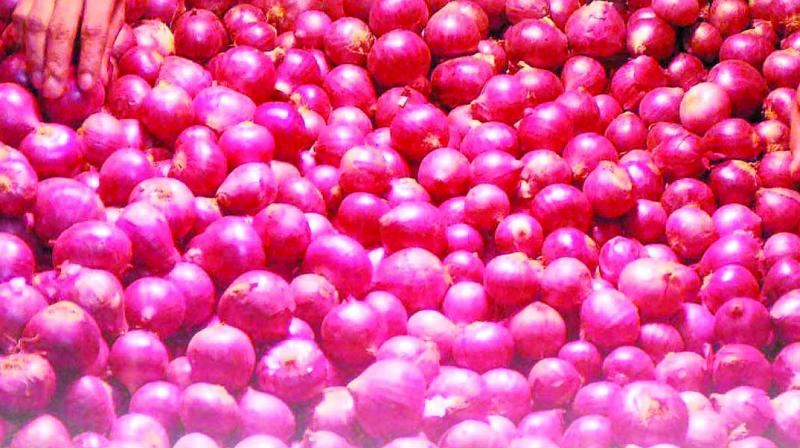 The sudden price jump caused due to heavy monsoon in the major producing states destroying the crops, has left many in a state of despair.

It is 10 in the morning and vegetable vendor Suresh Gupta is placing fully loaded vegetable baskets on the table while keeping a small one with onions in the corner as he understands the delima of a customer when buying onions. The vendor rues the sales have dipped since the shortage, and rise in the price that costs people a kilogram, anywhere between Rs 90-100 a kilogram.

“The rise started with Rs 40 per kilogram, then 50 and slowly it has reached to Rs 90 a kg. People aren’t buying it in good quantity, nothing more than 250gms or maybe half a kg. Only 10 per cent of the people, who come to buy vegetables, buy onions,” shares the 57-year-old who is selling a kilogram for Rs 85 and still doesn’t see buyers flocking.

The scarcity and sudden price jump caused due to heavy monsoon in the major producing states — Bihar, Gujarat, Rajasthan, Uttar Pradesh, Maharashtra, Madhya Pradesh and Karnataka — destroying the crops, has left many in a state of despair. A consequence of which can be seen in neighbouring country Bangladesh where people are standing in long queues to buy onions.

Andheri resident Pratibha Gangwar, while peeling an onion calls her tears real and a direct effect of the hiked price. For someone living alone looking after her expenses in a city like Mumbai, the 26-year-old plans to refrain from buying onions till the time they reach an affordable price range.

“I have rent to pay, which anyway are skyrocketing here. And on top of that, to buy vegetables that cost 90 rupees a kilogram is too much of an added expense. I brought a kilogram two weeks back and have made minimum use, irrespective of the fact that it makes food less appealing. But, we got to do what we got to do,” rues the solution consultant.

A complete contrast to the situation last year, when there was a steep fall in the wholesale price and Nasik-based farmers came out on roads dumping 30 quintals of onions. A distant dream to come true today anytime soon, housewife Mayura Worlikar is trying her best to make peace with it at the same time using onions as little as possible while feeding her joint family.

“The crisis and paying almost Rs 100 a kilogram has left us surprised. It was fine even when it reached Rs 40 a kg; we could still afford and not cut down the usage in our day-to-day cooking. Just imagine, we are a family of seven members and now we have restricted ourselves to using only one onion in our daily food preparations,” sighs Worlikar.

Meanwhile, snack stall owner Bharat Hande’s narrative is no different. Having served people pani-puri and sandwiches for 12 years, Hande feels helpless about the negative impact on his business. “What is a pani-puri without kanda (onion)?” he asks, adding, “It is almost out of the common man’s reach. We have reduced the usage to a bare minimum; the vegetable sandwich doesn’t have onions anymore, and we completely refuse giving extra onions for pani-puri. Of course, the customer complains all the time, they get upset as it is affecting their taste, but we try to reason with them and explain our plight.”

Recalling a similar situation that occurred during the Vajpayee government, vegetable vendor Gupta shares, “The prices had gone as high as 100 rupees a kilogram. But back then, the population wasn’t much and people’s income was fine so it didn’t hit that hard as it has now.”

While the chances of prices going down seem slim, the centre has already banned the export of bulbs to neighbouring countries, leaving them to fend for themselves.