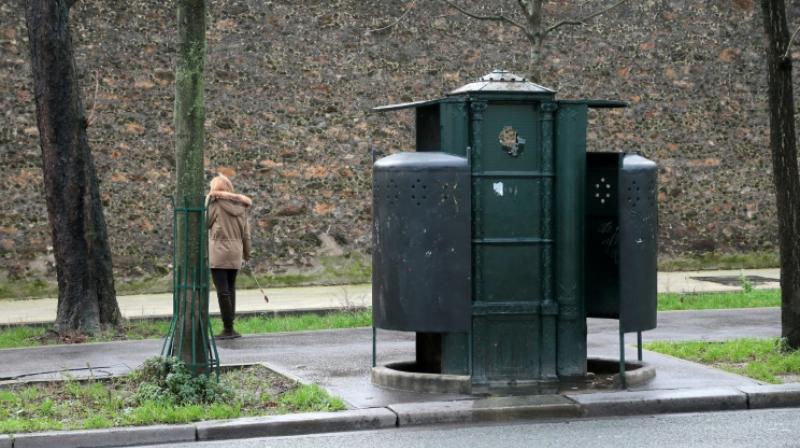 An attempt last year to revive "pissoirs" on the streets of Paris to stop men from urinating against walls. (Photo: AFP)

They were as much a symbol of Paris as croissants and the Eiffel Tower, though they had more than a whiff of scandal from the start.

Now the much-mourned "pissotieres", the dark-green public urinals that gave relief to generations of Parisian men, are finally getting their place in the city's social and architectural history.

The first-ever exhibition in the French capital dedicated to the once ubiquitous and notorious facilities opened on Wednesday. But the metropolis which invented the on-street urinal had an ambivalent attitude towards them from the unbuttoning of the first fly, curator Marc Martin told AFP.

The one-man originals -- with a rather phallic peppermill design -- were quickly christened "Rambuteau's columns" after the aristocratic city official who commissioned them in 1834.

Scandalised at the double entendre, "Monsieur Clean", as he was nicknamed, tried to give the urinals a grander air by calling them "vespasiennes" after the Roman emperor Vespasian who once taxed urine -- which the ancients use to bleach their togas.

But the pissotieres' success quickly spawned three-, six- and eight-man versions -- and that is when the fun began, laughed Martin, an artist and photographer who is a specialist on forgotten urban underworlds.

"They rapidly became places for hookups that would be impossible anywhere else. Generations of (gay) men were emancipated in them," he said.

But beyond the gay world, they also played a pivotal role in French history as a place of secrets and subterfuge, used by spies to make drops and by Resistance fighters to pass messages and weapons out of sight from the Nazi occupiers during World War II.

Some of the disinformation that fuelled the anti-Semitic Dreyfus Affair, which rocked France at the turn of the 20th century, was spread through the pissotieres, Martin found through a decade of research.

But it was their reputation for illicit encounters that piqued the interest and the pens of writers from Verlaine and Rimbaud to Celine. Some scholars even believe Proust may have enjoyed pongy pleasures in their stalls.

Martin said they were "an incredible vector in social and sexual mixing", particularly the three-man version, where the man in "the highly strategic middle stall was usually there to do everything but go to the toilet".

Martin said his own fascination with them -- he has also written an acclaimed book on the subject -- began because he had the "first sensations" about his own sexuality "just as they were being closed down" in the early 1980s.

Only one remains in Paris, just outside the walls of the Sante prison, an unconscious symbolic warning, Martin insisted, "of where your behaviour might land you".

Like their ripe smell, the taboo lingers, with all of the city's major museums holding their noses at the idea of staging the show, which has found a home at the Point Ephemere arts space by the trendy Canal St Martin.

The show will travel to New York's Leslie-Lohman Museum of Art next year after already having an extended run at the Schwules Museum in Berlin.

"It's a shame to sweep this little human story under the carpet," Martin said. Despite endless campaigns for their closure on grounds of "social hygiene", pissotieres were a potent if smelly symbol of the City of Lights, he said.

Hollywood legend Alfred Hitchcock -- whose "Psycho" offered the first footage of a flushing toilet in a mainstream Hollywood film -- was a fan, insisting on meeting journalists at one for his interviews during a 1969 Paris visit.

The exhibition also includes touching testimony from the urinals' former users, including one old man who admits for the first time that he met his life's partner in one.

Another, 73-year-old Jean-Pierre, was positively misty-eyed about them. "I was touched up by dancers, fashion designers, actors and singers in them... You could meet someone in a smelly urinal and a few minutes later be in their sumptuous apartment. It was such an adventure!"

An attempt last year to revive "pissoirs" on the streets of Paris to stop men from urinating against walls -- a perennial problem -- was quashed by feminists who argued they were sexist because none were adapted for women.

T'was ever so, said Martin, who said women have been "long forgotten" in the history of public lavatories.

In keeping with pissotiere tradition, and Paris city hall's policy of free public toilets, the exhibition is open to all.  You don't have to spend a penny, joked Martin: "We could not have had it any other way."