For peace and prosperity

Dr M. Satish Kumar is an academic who has made valuable contributions towards promoting cross-cultural understanding. 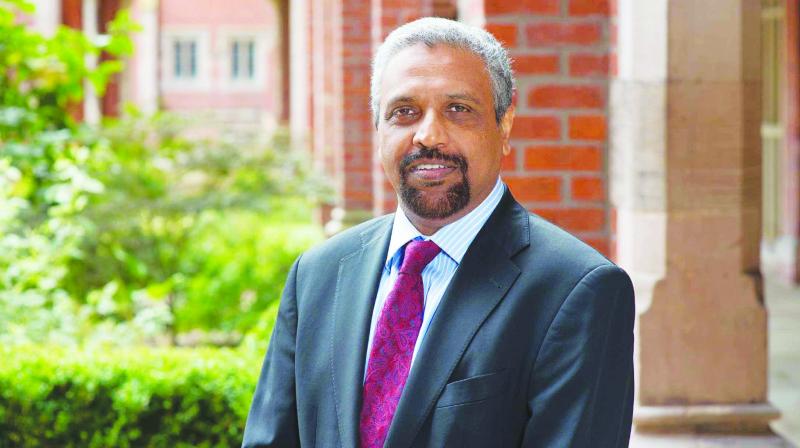 Dr M. Satish Kumar lives in Belfast, Northern Ireland. He has been working at Queen’s University for 17 years now as a social scientist doing research on the colonial and postcolonial studies of India. Before that he has been in India and the US, a full-time academic, working in the higher education sector for more than 27 years. Telling Satish’s story would not be easy, for you will have to go through a lot of degrees and academic terms. It would be easier to talk of his achievements— when as the founding director for Queen’s Academy India, he could foster strategic HE partnerships across several fields, notably in the field of cancer studies between Indian Institute of Immunology (New Delhi) and Queen’s University Belfast.

“I helped coordinate the prestigious Queen’s-India Lecture Series, which was generously supported by Lord Diljit Rana for three years. I had the good fortune to oversee the presentation of the Honorary Degree for the late Dr. A.P.J. Abdul Kalam. Little did I know then that he would spend his moment in Shillong, my hometown!” Satish writes in an email interview. That’s where he grew up, earning his BA degree in Economics Honours from St. Edmund’s College. He went to JNU for PG, MPhil and PhD and worked there too for 10 years before joining Queen’s. Before that he became the first Indian with an Indian degree to teach at the University of Cambridge.

“My training in India across disciplines enabled me to maintain a unique identity and perspective, which I bring to my work,” Satish says. His most recent research focuses on critical global challenges that face humanity. “I have set up a Consortium on Heritage in South Asia, where the focus is on shared values and traditions. My current research focuses on how changing climatic regimes have a critical impact on heritage in marginal ecological zones.  I also handled the internationalisation project between Queen’s University and India since 2005,” he says.

Many awards and recognitions followed. He was awarded the Bhoovigyan (Earth Sciences) National Award by late Bhairon Singh Shekhawat, Vice President of India for contributions to Population, Environment & Development Studies, in 2002. He received the India-European Union Global Peace and Friendship Award, 2001 for promoting international peace and understanding based on the values of Peace, Education and Culture over the past 20 years in the communities in India and the UK. In 2014, he was presented with the Queen’s University Teaching Award as nominated by the students.

Satish also went on to establish Young Civic Leaders of Northern Ireland (2014) programme to encourage young people in Northern Ireland to engage in their local communities and make civic contributions. “I remain committed to my Indian roots and origins and was a Chair of the Board of Directors for ArtsEkta, Northern Ireland’s leading Intercultural Ethnic Arts and Cultural Organisation (2013-15), promoting intercultural dialogue,” he adds. “As a global citizen, I believe that we have a responsibility to become capable to contribute to the peace and prosperity of humankind. I remain true to my values as an Indian first.”