The market research provider projects that the number would grow by 12.5 per cent annually through 2022. 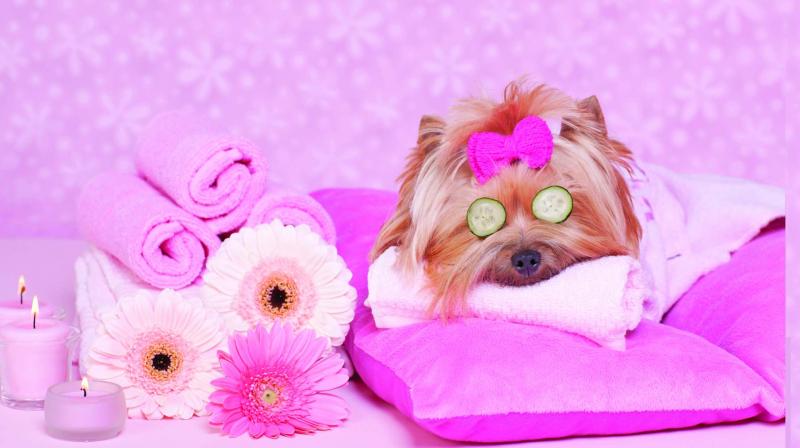 From fashion to spa treatments, relaxing centres and exotic hotels, the Indian market has all to offer our furry friends

Pampered pooches in India don’t just live a life of comfort but a high-end luxurious life. While pets used to be guards outside the house, slowly the trend shifted and it became a symbol of social status to have a dog. Today, they have become a part of the family and the Indian market has been booming with the rising demand for pets and the increase in the owner’s willingness to spend on them.

According to Euromonitor International, last year Indians spent Rs 19.8 billion on pet care. The market research provider projects that the number would grow by 12.5 per cent annually through 2022. From fashion to spa treatments, relaxing centres and exotic hotels — everything is available for the loved pooches.

It is the major segment in  capturing more than two-third of the market revenues. Mars International is the leading manufacturer and supplier for pet food in India. It has low-cost brands like Pedigree and Whiskas and premium quality brands like Royal Canine under its portfolio. The company dominates the pet food market with 70 per cent revenue share. Other major pet food companies operating in the country include Provimi Animal Nutrition India, PetSetGo and Bharat International Pet Foods. “Today, we are not only producing but are also exporting dog food unlike earlier times when we use to import quality dog food. Though dogs do not demand anything, it is the owner that feels it is going to make the dog happy and eventually the owner is happy. This has forced owners to take their dogs to pools and salons.  On an average an owner spends Rs 6,000 to Rs 50,000 on their dog, depending on their budget,” shares Viren Sharma, also known as the Dog Man of India. He is a dog behaviourist with over 20 years of canine experience. 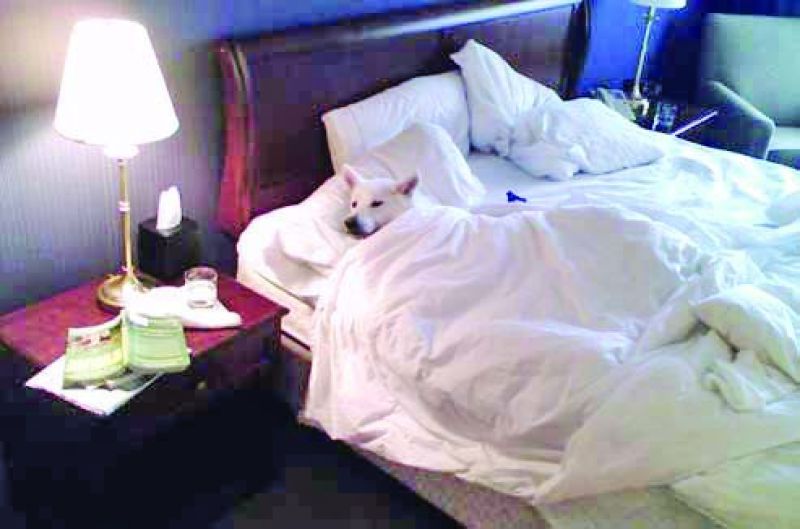 A dog relaxing at a hotel

He also launched India’s first online portal for dogs (www.dogbazar.org) which is the highest rated and consistently visited e-commerce website in India. His esteemed client base includes Bollywood superstar Salman Khan and many more. However, these online portals are definitely not good news for local retailers. Ashish, who has been running his store, Pet Food at Tilak Nagar for the past three years says, “There was nothing special about entering this market. Now it is getting worse as we are losing our customers to the online portals with whom we are just not able to compete.”

Doctor Dharam Vir Machanda from Pampered Pets, in Gurugram shares, “When I started my venture in 2012, there was a total of seven per cent dog food consumption in India. Now, it has risen to eight per cent, and the rest feed homemade food. Though it has increased marginally, it is still sufficient.”

Machanda, whose clinic not only provides the basic amenities but also offers grooming services, adds, “Doctors are also spreading awareness about dog food, as not all homemade food is suitable for a pet’s consumption. However, due to the high cost of the products, many owners switch back to homemade food or opt for cheaper dog food that only provides maintenance diet and not growth. It also differs with every breed.”

Anand who has a mixed street breed also opts for Barf raw food diet. “We used to feed him homemade food but then he starte having medical complications. So, we switched to raw diet and it  improved his health. He doesn’t face any medical issues.”

“Earlier pet dogs were just guards and emotional attachment was very limited. But today, they have become an integral part of owner’s life— people share the same bonds with dogs that they do with their loved ones. If you treat your pets like your babies, you don’t mind spending a lot. High-end stores like Louis Vuitton, Gucci and Armani have an entire collection for dogs, from wardrobe to jewellery, perfumes and headgears, and I know people who have these items on their bucket list. Many manufacturers are importing it to India as well to take pet fashion to the next level,” says Viren Sharma. What’s more interesting is that people are willing to spend more than half of their salary on their dogs as they give them utmost happiness and loyalty.

Sharma, who started this business in 2001, owns more than three pet boutique stores and a pet hotel in the pink city. With his unique marketing strategies the number of dog owning families in Rajasthan has increased from 300 to over 1 lakh. “Travelling for the pet parents was a big problem, so the idea of putting up a hotel was not just in sync with luxury but convenience as well. Earlier, people use to cancel their trips because of their pets. Now with dog hotels, the owners can leave their pets with us for as long as they desire,” he smiles. Ranging from an hour to months, you can let your pets have their own time while you travel for work or fun. “We also provide online video chatting on 56 inch screen for the owners to keep a check and have some decent quality time even when they are not around. Along with that, we provide pick up and drop facility with personal chauffeurs and organic homemade diet. For indoor facilities, we have a small gym, customised kennels and even a swimming pool. For us dogs are Vsand they also deserve a holiday.”

Siddharth Saigal, founder of Wrap Studio is the proud owner of three pets – a labrador, a rottweiler and a beagle. They are a part of his extended family. “We make sure to take them for their summer vacation to hills (Kashmir) in our summer home. We celebrate their birthdays in dog cafes like puppy chino, while using trumpetz service for their washing /spa treatment,” shares Saigal. His monthly expenditure, on an average, is Rs 20,000 per dog. It includes their food, spa and vaccines.

Critterati in Gurugram is an all exclusive luxury hotel for pets in India with facilities like Pet café, swimming pool, spas, playground, veterinary care, television lounge, deluxe suites, salon and a cafeteria for wedding and birthday parties. For pet relocation, Pet Fly and India Relocation in Delhi, Anvis in Bengaluru, and Furry Flyers in Mumbai are known for their services. 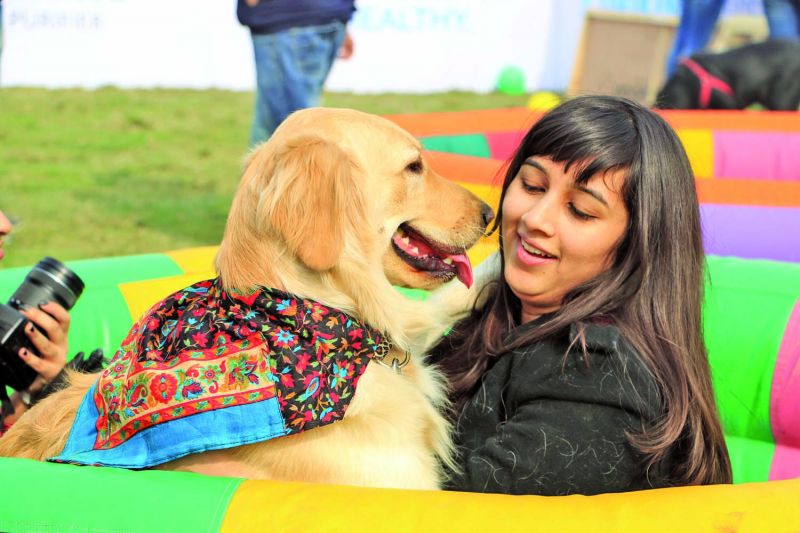 Pet shows are no longer a concept of the West, with very passing year, the number of organisers and participants are growing. Akshay Gupta, founder of Pet Fed which is one of India’s biggest pet festival, shares, “Back in 2014, we realised that there are not a lot of places in India for pet owners. If you compare it to places in Europe, cafes are all pet friendly. So we decided to encourage this culture and allowed owners to hang out with their pets, this inspired us to start Pet Fed in every city.”

Talking about the growing number of participation, he says, “People participation is increasing with every single event, especially in smaller cities like Chandigarh and Pune. We are not able to host any events there but people watch our videos on you tube and we keep getting requests for these events.”

Sharma who has also been organising pet shows for over 15 years adds, “India is just gearing up to a trend which already prevails globally. My first dog show had 20 dogs and 50 audience members but now when we organise a show, we’ve 20 thousand dogs and 40 to 50 thousand people. Also, these shows provoke emotions in people to adopt pets. Technology has also helped in makeing people aware about latest trends. Though we are becoming a pet friendly country, countries like USA have cinema halls and restaurants. In India, your neighbour might have a problem with your pet but with time, we will also see these things change.”

“With increasing awareness about luxury, awareness about adopting stray dogs is also increasing. You’ll see that NRIs and ambassadors coming from different countries are opting for adopting stray dogs. People, who adopt, tend to spend more on their pet. They feel these pets should also feel the same comfort. They don’t have pets for their status. They really love pets,” shares Gupta.

For the ones who don’t own dogs, you can ask for your yearly dose of dog love at pet festivals across India. “Our dose of Puppy Therapy is for the people who do not have pets. They can come and spend time with pets, realising how stress relieving it is, and interestingly we do it with stray dogs only,” adds Gupta, as he signs off.