Say no to plastic in your garden

Respect the soil in your garden: Don't add plastic to it. 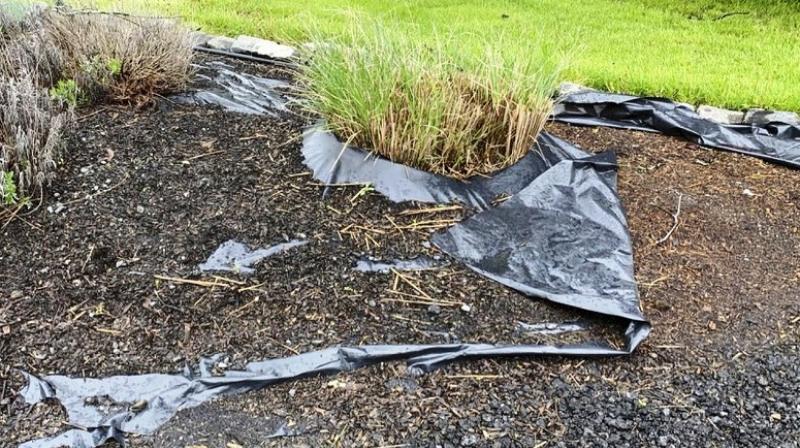 Both black plastic and geotextiles are widely used by farmers, gardeners and landscapers. (Photo: AFP)

Washington: Take, for instance, black plastic sheeting sold as mulch. This stuff appears at first to be a cure-all for weed problems. Lay it on the ground, cut holes only where you will set plants, and weeds will die from lack of light, presumably ending all your weed problems for years to come.

But other problems arise. An impermeable sheet of plastic over the ground can leave plant roots and soil microorganisms gasping for air. Roots set in the openings might develop even greater breathing problems when all the water falling on the plastic floods those holes. And the plastic eventually starts to tear and break apart, which creates a general mess.

Geotextiles, introduced more recently, are offered as an alternative to solid black plastic sheeting. These are woven or spun plastic fabrics that resist tearing and have many small holes to allow passage of air and water.

Both black plastic and geotextiles are widely used by farmers, gardeners and landscapers. If you don’t like the way these synthetic mulches look — surely the case when they are used in landscaping — you cover them. Wood chips look natural and are widely used for this purpose. And anyway, geotextiles need a thin cover of something to shade out the minimal light that makes its way through the tiny holes.

But problems arise again. Over time, plenty of weeds eventually sneak in to grow in the wood chips covering the plastic. Over time, the chips or other coverings also slide around to expose the plastic or geotextile beneath — not a pretty sight!

Furthermore, even if black plastic or geotextiles don’t do their jobs forever, they’ll be in the soil that long, or almost. Try to make over the landscape in the future and you will be wrestling with and cutting geotextiles or collecting scraps of black plastic.

Another, fortunately, less frequently suggested use of plastic in the soil is plastic “peanuts.” Mixed into the soil, the reasoning goes, they should increase aeration. While they would undoubtedly make a soil lighter, and thus seemingly better aerated, all that extra air is pretty much locked up in the peanuts.

It has also been suggested that a layer of plastic peanuts be put in the bottoms of flowerpots to enhance drainage, as layers of gravel have been used. In this case, that layer of peanuts is worse than useless, just as the traditional layer of gravel was. The effect in both cases is to create a “perched” water table inside the pot, giving the roots less depth of well-aerated soil.

Also, spent potting soil can be spread on the ground or added to a compost pile, but do you want the peanuts there also?

Enough plastic makes its way into our soils inadvertently, from misplaced plant tags to those stickers now ubiquitous on fruit skins to pieces of old plastic pots.

Deliberately embedding a permanent, synthetic blanket in the ground or mixing plastic peanuts into the soil brings no benefits that could not be had in a more nature-friendly way. Paper mulch, for instance, biodegrades and can stave off weeds for a season. Perlite or vermiculite are two minerals that can lighten a soil more effectively than styrofoam peanuts.

Removing plastic put on or in the soil becomes difficult or well-nigh impossible. Deliberately putting plastic in the ground is disrespectful of the skin — that is, soil — that covers our planet and sustains much of the life here.