Listen to the clang of trains being shunted and an engine’s call. Watch the sun set over colonial Bombay. 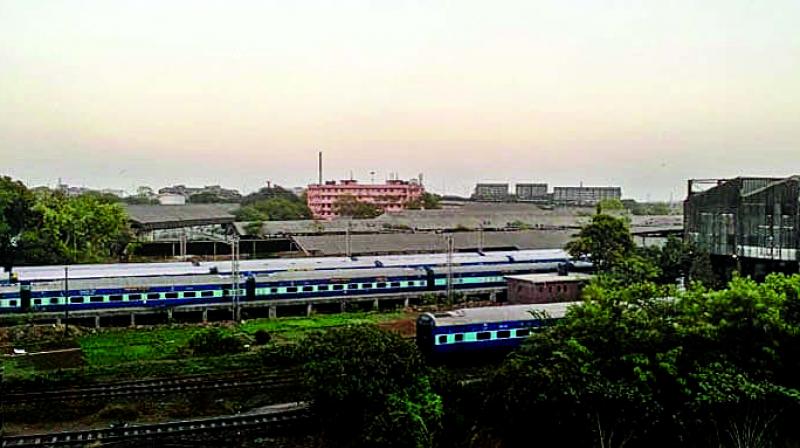 The rail system in Mumbai is the city’s lifeline. It ferries millions of people across the city on three lines – Western, Central, and Harbour. Trains begin to run at 4 am and run until past midnight.

In the foreground is the conveyor belt of the Eastern Freeway. Behind it looms the mammoth yellow arch of Mazagon Dock Ltd. – Shipbuilders to the Nation. Beyond is the harbour that gives the city its name: “Bom Bahia” (meaning “good bay”). I have eyes only for the eponymous railway that adorns the city’s “other” coast like a less ostentatious necklace: the humble, plodding Harbour Line. 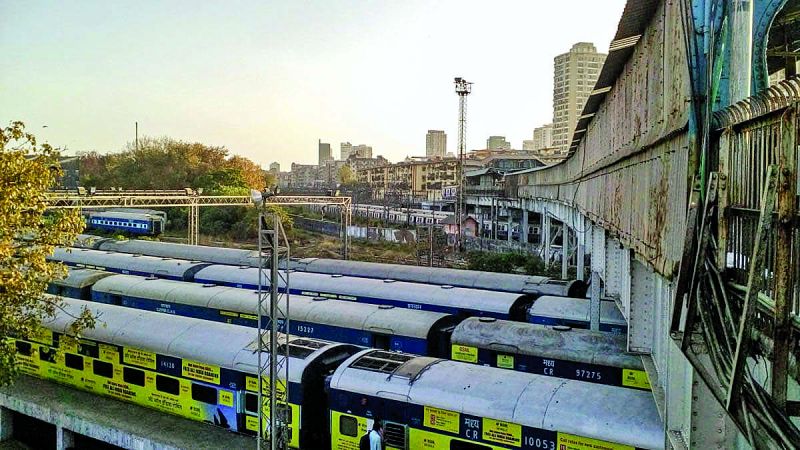 Leap onto the parapet. Hop over the railing. Trample past some shrubs and lo! – an ancient nine-coach rake trundles out of unseen Dockyard Road, curves eastwards over an expansive train yard, and reaches Sandhurst Road seconds after the guard’s cabin has cleared Dockyard. From your height, it looks like a toy train. If only you had a remote.

Listen to the clang of trains being shunted and an engine’s call. Watch the sun set over colonial Bombay.

Clamber down the seldom used stairs of Sandhurst Road’s Platform Number 4. Walk past the baby-blue staircase leading up to the office of the Senior Sectional Engineer (Electric) and find yourself in a station area like no other.

Fourteen cavernous godowns are separated by cobblestone plazas. The walls consist of 15 or 20-foot high stone arches joined by brick. The roof is corrugated metal. Each godaam shelters an island platform that was once flanked by two side lines; most of these have been stripped away. In its 20th century heyday, Wadi Bunder was the city’s premier hub for goods transport, employing thousands of labourers. Today, a few men load white parcels into a single windowless luggage van stabled at one of the few godowns still in use. The nearby offices of Raj and Co. (Clearing, Forwarding & Transport Agents) consist of three chairs, a table, and a solitary clerk flipping desultorily through a yellowed register. No one else is in sight. 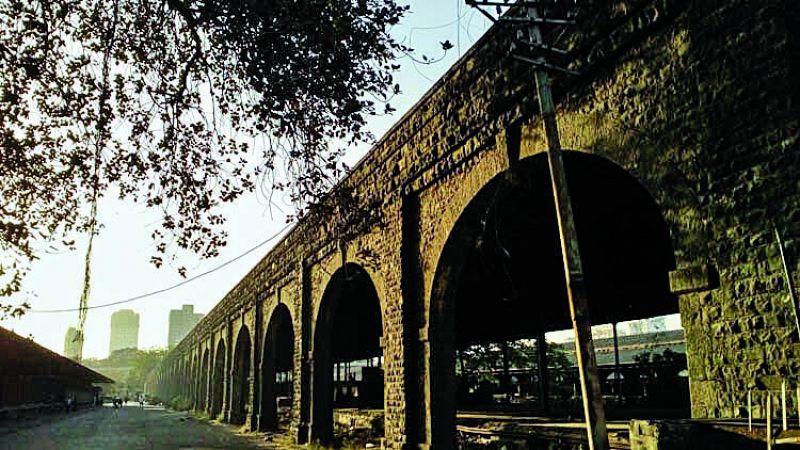 The abandoned platforms are strewn with spools of thick cables, cannibalised machines, and obsolete wooden sleepers arranged in a pyre. Faded orange bunting harks of a union function. One godown has been commandeered by a shantytown. Clothes dry on a wire strung between mighty pillars that support this once buzzing yard.

Wadi Bunder is an old age home/graveyard for derelict compartments. Mismatched rakes of the old and new Rajdhanis, pantry cars, sleeper coaches, bio-toilets, and generator vans reach the end of the line – and life – here. Grass grows between rails, and vegetables are grown between tracks. This is where Miss Havisham would park her personal train. Come evening, spotlights are switched on. Someone alert Sanjay Gupta about this readymade film set.

Walk back towards, under, and past the station. Climb a concrete ramp between stationary trains and watch 11093 Down CST-Varanasi Mahanagari Express being prepped for tonight’s journey. Young men in rolled-up trousers hose the exterior while ragpickers scamper through the inside, cleaning the train before its 1,500 kilometre journey to the north.

“And he stood upon the foot overbridge, Lord of all he surveyed.” – Gospel of Mrigank.

At Sandhurst Road, the two tracks of the Harbour Line part from the four tracks of the Central Line, meeting once at Kurla, ne’er to meet again. The clickety-clack of trains hurtling on the ground over concrete sleepers is replaced by the thunder of Harbour Line trains ascending the ramp over metal ones; Sandhurst Road is the only station to have platforms at two levels. The unlit coaches of a train crawl out of Wadi Bunder towards CST, soon to burst with light and people.

The foot overbridge shudders as a local enters the station, the rails gleaming in its headlamp. Southbound services overflow with light; the doors of ’burb-bound locals are darkened by clinging, straining bodies. I count the coaches of every outstation train – a childhood obsession. The Duronto to Nagpur – and my parents – passes by. So do the Howrah Mail to Calcutta and the Devagiri Express to Secunderabad. So will the Konkan Kanya to Ratnagiri and Sindhudurg and Goa, and our old friend the Mahanagari, to Khandwa and Itarsi and Jabalpur and Satna and…