Five things we must know about the burning Amazon rainforest

The Amazon rainforest is burning and we must do all we can to preserve this biodiversity goldmine. 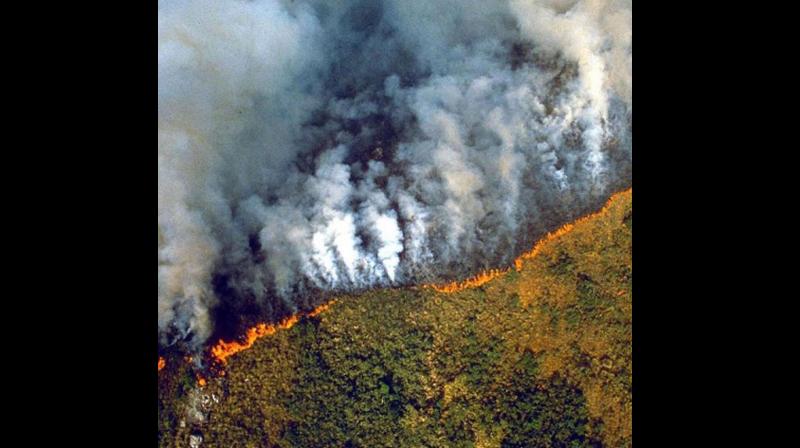 The Amazon is an ecological treasure not only for plants and animals, but of people as well. (Photo: Instagram)

The Amazon forest has been on the news recently as it has been burning up for the last three weeks. People don’t realise the importance of these rainforests. The Amazon is the world’s largest tropical rainforest.

It covers 5.5 million square kilometres across the northern part of the South American continent. It is an ecological pot of gold, which is now under severe threat by the raging forest fire.

The Amazon rainforest covers nearly 40 per cent of Latin America and spreads across nine countries: Bolivia, Brazil, Colombia, Ecuador, French Guiana, Guyana, Peru, Suriname and Venezuela.  This area is a protected zone and is a home to a biodiversity sanctuary that can’t be found anywhere else in the world.

The rainforest is home to almost a quarter of the Earth’s wildlife and plant species. It has 30,000 types of plants, 2,500 types of fish, 1,300 types of birds, 550 reptiles, 500 amphibians and 2.5 million types of insects. This kind of diversity is not found anywhere else in the world.

Lungs of the earth

These rainforests contribute to a third of the world’s total forests so it is natural that it produces a lot of oxygen as well. The Amazon river and its tributaries also provide the Earth with 20 per cent of the total unfrozen fresh water.

This river has been discovered to be the world’s largest river and in 2007 it was said that it spans for over 2,700 kilometres.

Due to its vastness, it acts as a sink for carbon dioxide. If the Amazon disappears, 90 to 140 billion tons of carbon dioxide will enter the Earth’s atmosphere. The carbon sinks, in turn, helps regulate global warming, reported the World Wildlife Fund (WWF).

Deforestation will greatly increase the amount of CO2 in the air, making it harder to breathe.

The Amazon is an ecological treasure not only for plants and animals, but of people as well. The forest has been home to millions of people for over 11,000 years. These forests are directly responsible, directly or indirectly, for the lives of 34 million people.

The locals of the forest, known as ‘Indians’ belong to over 420 different tribes. Out of these 420, 60 tribes live in total isolation. These Indians speak 86 languages and 650 dialects. The largest tribe is called Tikuna, and it consists of some 40,000 members. Survival International has reported that these tribes live in parts of Brazil, Peru and Columbia.

Manaus is a city discovered by the Portuguese in 1669 on the banks of the Rio Negro. It is considered as the capital of the Amazonas state and spans over a distance of 1.5 million square kilometres. Manaus has a population of 1.8 million.

After the creation of the free trade zone in 1967, the city went into a major decline after its boom at the end of the 19th century when rubber trade started. The city now mainly lives off its industrial sector. It imports spare parts and exports end products, notably electronic equipment. After Rio de Janeiro and Sao Paulo, Manaus is Brazil’s biggest economic hub.

In the last 50 years, the rainforest has fallen prey to mass deforestation and over 20 per cent of the forest has disappeared. And according to the WWF, this massive deforestation id not stopping, but just accelerating.

Despite the signs and dire warnings of the effects of global warming, the rate of deforestation has just increased 4 times since the start of the year. This has happened after Brazil’s new President Jair Bolsonaro has taken charge in early 2019.

Reports were released by INPE, which tracks the cutting of trees in the Amazon. It shows that around 2,254 square kilometres of the forest was cleared in July, an increase of 278 per cent from a year ago.

Construction of dams, soya farming and livestock farming are the main reasons for deforestation. The mining industry, infrastructural developments and forest fires are other reasons.

Apart from being rich in biodiversity, it also has vast reserves of minerals such as gold, copper, tantalum, iron ore, nickel and manganese.