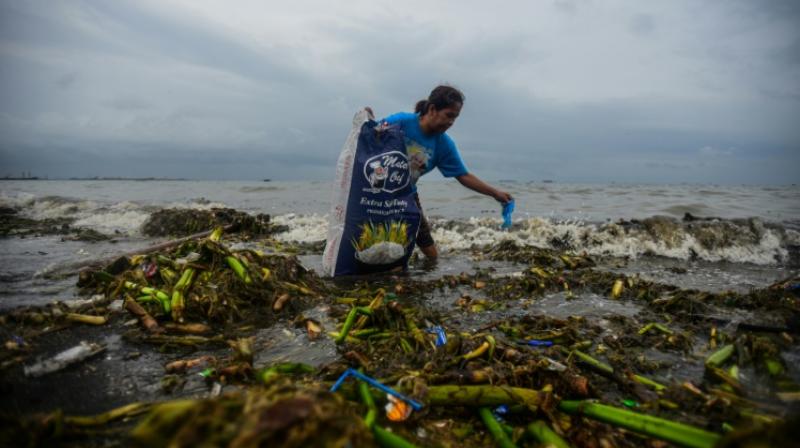 A landmark UN report to be unveiled next week will warn global warming and pollution are ravaging Earth's oceans and icy regions in ways that could unleash misery on a global scale. (Photo: AFP)

Thousands of volunteers wielding nets and bin bags scoured coasts, parks and riverbanks across the globe Saturday, in a litter-picking drive highlighting the vast quantity of trash dumped worldwide, a day after mass international climate protests.

Campaigners took part in World Cleanup Day from Manila to the Mediterranean, as hundreds of thousands of people across the world take part in demonstrations and activities calling for urgent action on the environment.

Young people have been at the forefront of the movement, with masses of children skipping school on Friday for a global climate strike, which teen activist Greta Thunberg said was "only the beginning".

Some four million people filled city streets around the world on Friday, organisers said, in what was billed as the biggest ever protest against the threat posed to the planet by rising temperatures.

It kicked off a week of climate action called for by Thunberg, who was among several hundred young activists attending a climate summit at the United Nations on Saturday. The World Cleanup Day on Saturday is an initiative that has got millions into the streets and cleaning up litter across the globe since it began just over a decade ago.

A climate protest on the streets of Paris attracted some 15,000 people, according to a tally by independent consultancy Occurrence, but the rally was marred by clashes between security forces and a relatively small number of troublemakers.

"The conditions for a non-violent march are not in place," Greenpeace, a co-organiser of the event, said on Twitter, as police fired teargas at protesters.

For us to help

While the types of trash collected varied, the common material in the bin bags across the planet was plastic, amid surging concerns over the environmental costs of single use items and microplastics in world waterways.

Plastic pollution is a major problem across Southeast Asia, but particularly in the Philippines, which -- along with China, Vietnam and Indonesia -- is frequently listed among the world's worst offenders.

In the Philippine capital, some 10,000 people swept across a long stretch of beach on heavily polluted Manila Bay, clutching sacks they filled with rubbish.

"It's for us to help the environment, especially here in Manila, there's a lot of garbage," Mae Angela Areglado, a 20-year-old student told AFP as she pitched in with the cleanup -- held right next to the city's huge Baseco slum.

"(Plastic is) affecting the marine life because they think that it is food," she added.

In the Pacific island nation of Fiji, which is among the countries worst affected by sea level rises and has become a vocal advocate for global climate action, people scoured palm-fringed beaches west of the capital Suva, heaving discarded car tyres and engine parts from the coast.

On Australia's Bondi beach activists sifted through the sand, carting off bits of plastic and cigarette butts.

The mass cleanup is coordinated by the Let's Do It Foundation, which began life in Estonia and says that 18 million people from 157 countries participated in the global cleanup day last year. This year, it says more than 160 countries are taking part.

"Garbage is a global problem and it affects all the people in the world. It knows no state borders," said the organisation's president Heidi Solba in a statement.

The group said about 30,000 people are participating in Estonia on Saturday in a drive focusing on small litter like bottle tops and cigarette butts.

Mart Normet, leader of the initiative in Estonia, said he drew hope from the enthusiasm of young people.

"When I look at the new photos on Facebook, I can see that the new generation is bringing a completely new attitude. Littering and damaging consumption are a thing of the past," he said.

In Vietnam's capital Hanoi, around 1,400 volunteers went searching for litter under the scorching sun. "Although our actions are very small -- like cleaning trash from the sidewalk -- it could spread a meaningful message," 18-year-old Hoang Thi Hoan told AFP, as motorists zipped by on a busy street.

Friday's strike organisers 350.org said the youth-led rallies were the start of 5,800 protests across 163 countries over the next week.

UN chief Antonio Guterres met young activists in New York on Saturday, telling them: "There is a change in momentum... due to your initiative and to the courage, with which you have started these movements."

A landmark UN report to be unveiled next week will warn global warming and pollution are ravaging Earth's oceans and icy regions in ways that could unleash misery on a global scale.

The World Health Organization (WHO) said in August that the level of microplastics in drinking-water is not yet dangerous for humans but called for more research into potential future risk and a reduction in plastic waste.

Seventy-nine percent of the plastic ever made has ended up dumped, with little reused or destroyed despite recycling and other initiatives to curb use, a UN report from 2018 said.