Theatre personality, Krishnakumar, who is the artistic director of the Little Theatre, recalls an incident that moved him greatly. 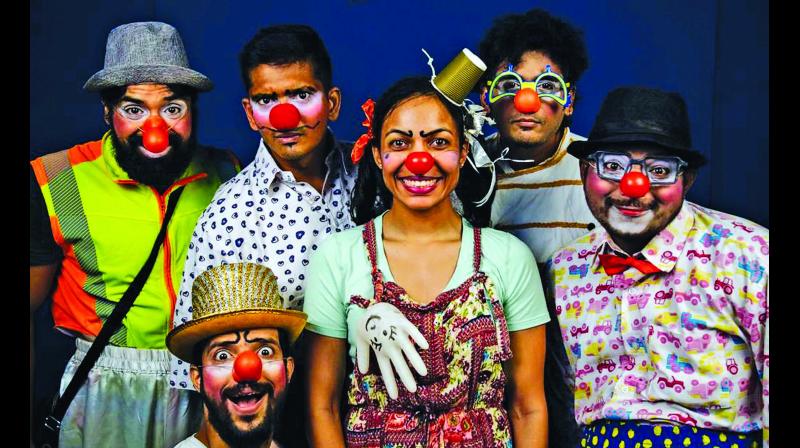 Training in theatre helps, he says, as does training in music and dance.

Hospital clowning is a concept that has found terrific response in Western countries, and has been bringing smiles to thousands of children's faces. Chennai too has its share of ‘clown doctors’ thanks to Dr. Rohini Rau and her husband Krishnakumar Balasubramanian, who have been cheering ill children since 2015.

Talking to us, Dr. Rohini, senior medical officer at the Kauvery Hospital, says “there is a difference between being a doctor and being a clown care expert. The satisfaction you get from medical clowning is almost immediate. As a doctor, you prescribe medicines which take time to work. But with this, you see a difference right in front of your eyes.”

Theatre personality, Krishnakumar, who is the artistic director of the Little Theatre, recalls an incident that moved him greatly. “It took place in our first year of clowning when we were developing various clowning techniques. We met a child at Kauvery Hospital who had just undergone a heart surgery. He found it difficult to even drink water, and just breathing was painful. We tried talking to him and did some magic tricks, but his response was minimal. Then my partner Dinesh E pretended to have terrible stomach pain. We asked the child to say the ‘magic phrase’ Zee Boom Ba! I placed my hand on Dinesh'’s stomach, and the fake thumb I was using lit up. I pretended to pull out the pain and Dinesh said he was much better. Astonished, the child tried the magic phrase for himself, I repeated my part of the act, and he told his mother, ‘Amma, half the pain is gone!’ He went on to drink a glass of water!”

What does it take to be a clown care professional?

Dr. Rohini says “one of the most important things is empathy. If you are not able to understand what the patient is going through, it will be difficult to help them out.”

To that, Krishnakumar adds improvisation. “When you work as a hospital clown, every day the scenario is different, as you meet new people with different problems. You have a basic template, but you need to do completely new acts with different people.”

Training in theatre helps, he says, as does training in music and dance. Storytelling, magic tricks, singing and puppetry are other tools in a clown-care expert’s bag.

Dr Vivian Kapil, a psychiatrist at Sri Ramachandra Medical Centre, says, “Hospitals are usually perceived as an intimidating environment, considering the various invasive procedures a child has to undergo. This is aggravated when they are faced with a debilitating illness. Medical Clowns can alleviate the psychological distress/anxiety associated with hospital stay, making children more amenable to tests. They also promote optimism, which in turn gives the children a better chance of improving their quality of life.”

Twelve clown care professionals, all trained by the renowned Hilary Chaplain of New York, work under the Little Theatre. They visit kids at the Government Children’s Hospital, Egmore on Thursdays.  For information on hospital clowning courses, check out @thelittletheatrechennai.