Enquire about Mazagaon Gardens, and you’ll promptly be pointed towards Bhandarwada hill. 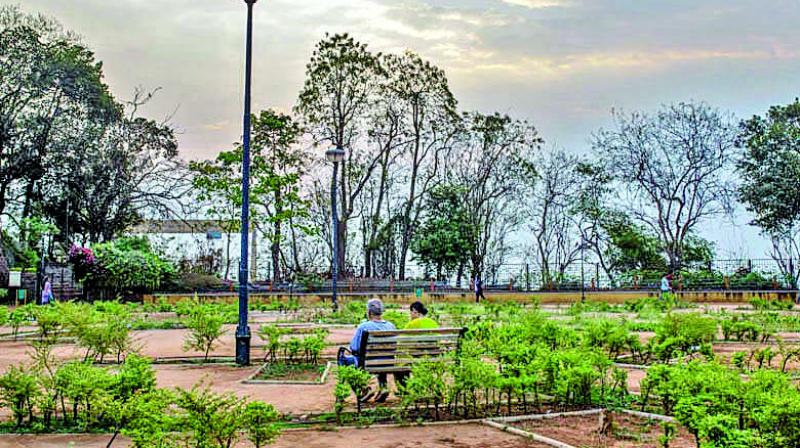 The wooden benches have clearly been placed close together for a purpose – to arch your back, stretch your legs, and face the east.

Dotted with beautiful tracks and flowerbeds, this 133-year-old garden atop Bhandarwada hill is the highest point in Mazagaon and the highlight of the day for many residents.

There is a sliver of disappointment when the spectacular sunrise you promised yourself decides to ditch at the last minute. You’ve probably hit the snooze button seven times before trudging out while still prying loose gunk from crusty eyes. But the clouds don’t care if you’ve had only three hours of sleep. The fog doesn’t know you’re not a morning person. The pollution won’t clear up magically. Know this, fellow night birds: no valiant sunrise viewing attempt goes in vain at Joseph Baptista Gardens.

Ask a local about Joseph Baptista Gardens, and you might draw a blank stare. Enquire about Mazagaon Gardens, and you’ll promptly be pointed towards Bhandarwada hill. If it’s between 6 a.m. and 7 a.m. and the local is wearing shorts or sports shoes, you’ll probably be accompanied to the wrought iron gates of the garden. Retie your laces, ready your quadriceps, and join the early risers, insomniacs, mothers, trainers, runners, and irritatingly chirpy children ascending the hill. You’re just in time for sunrise.

Once at the top, it’s easy to just get swept up by waves of walkers washing over the tiled tracks. Women in fluttering burkhas power-walking their way through previous night’s mindboggling soap opera twist; octogenarians plodding along with the support of canes and caretakers; children racing towards a perennially shifting finish line; middle-aged men in the early stages of preparing for a marathon; teenage lovers shuffling along the sidelines seeking a quiet corner; dogs setting an impossible pace for their walkers. Blobs of different shapes, sizes, colours, and gaits swirl together to create a walking typhoon that varies in speed and strength, depending on your position. Break away from the current. The sun should make an appearance any minute.

The best seat in the house is actually a standing point. Run the obstacle course lined with steel bars and spiky cycas, jump into the bramble, peek through the iron fence lining the outer edge of the park, and you will be rewarded with a sweeping view of the docks. From the highest point in Mazagaon, you can spot vessels setting sail in the distance, hear office-bound vehicles honking on the flyover, and feel local trains hurtling past the hill on their way to Sandhurst Road.

When the hill was home to Mazagaon Fort in the 17th Century, this exact spot probably offered uninterrupted views of the shimmering horizon, sans zigzag roads, bulky cranes, and winter smog. Maybe the British stood on the ramparts and watched Siddi ships approach the shore, led by general Yakut Khan, who ultimately razed the fort to the ground. Bhandarwada hill was stripped of its crowning glory, but it remained relevant in the centuries to come. Developed as a major reservoir by the British in the late 1800s, it continues to supply water to the central and southern parts of Mumbai. The 1.5-acre garden above the reservoir is named after political activist, former mayor of the city, and Mazagaon resident Joseph “Kaka” Baptista. Though constantly evolving in appearance, this basalt bastille has stood the test of time. You, meanwhile, have lost track of time, but the sun remains out of sight.

The wooden benches have clearly been placed close together for a purpose – to arch your back, stretch your legs, and face the east. Kites and crows fly around in dizzying circles, occasionally resting on the black iron street lamps. Enthusiastic locals perform pull-ups on the arch bursting with bougainvillaea, burying their faces into the bright blooms at every count. Adolescents play a game of badminton; no rules, no scores. Young men plug in their earphones and scan the morning multitude, muttering to no one in particular. A woman rolls out her yoga mat and assumes the position for the surya namaskar. Two nuns wait patiently, hands lying gently in their laps, eyes shut, faces averted towards the slowly surfacing sunrays. When the sun finally makes an appearance, it is already high above the old city skyline. You could be disappointed, but you’re distracted by the fisherwomen rapt in a rawas-related conversation and children using remnants of pumping equipment as a jungle gym. There’s plenty of room for everyone at Joseph Baptista Gardens, but none for disappointment.