As chairman of the censor board, Prasoon must know a thing or two about cutting out the outrageous. 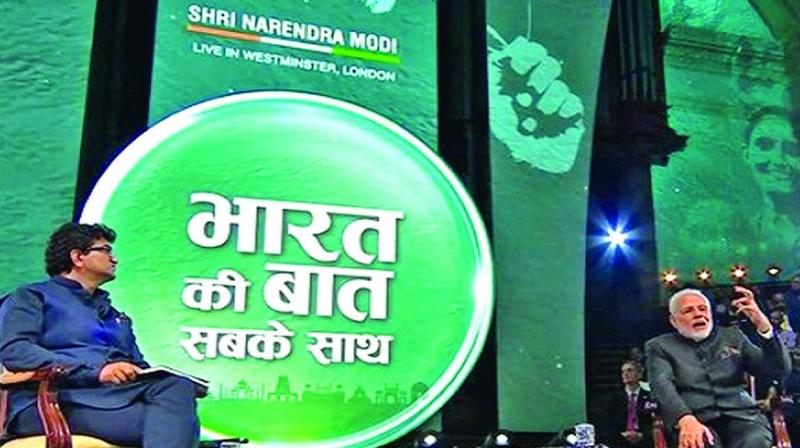 The show was a media lesson in how not to conduct an interview.

Prasoon Joshi —poet, lyricist, screenwriter, BJP Bhakt —received more brickbats than bouquets as he anchored the Prime Minister's carefully orchestrated Town Hall programme in Westminister during his UK trip. The show was a media lesson in how not to conduct an interview. The anchor posed the softest possible questions to the PM in an obvious PR exercise to bring out only those facets of Narendra Modi that Modi wanted to show to the world, especially the abject poverty of his early days on a railway platform hawking tea for a living.

As chairman of the censor board, Prasoon must know a thing or two about cutting out the outrageous. But the manner in which he padded up the PM's image by asking him questions like —Let's keep people's impatience aside, do you get impatient with the pace at which the government works, do you get irritated when things don't run at the pace which Modi ji wants? —were meant to praise Modi in front of his gathered Bhakts at an event organised by ruling party acolytes abroad.

Should we say that the number of rapes were less during the previous government and more in this government — was another classic question sponsored by those wishing to shape the show as a Modi admiration forum even in the face of such awkward events as rape and murder taking place in India almost on a daily basis in the last six years since the Nirbhaya incident.  The mixed message from the event televised live in India was a clear barometer of the present situation in the country that is equally divided between Modi admirers and baiters as the heat rises ahead of the 2019 Lok Sabha elections.

Richa Singh @richa_singh How many idols should I sacrifice due to this man’s arrogance?
@prasoonjoshi_ the world expected so much better out of you than to be a pawn in a well planned, staged act called this interview. It is pathetic how your questions are practically bread crumbs in this PR act

Salman Anees Soz@SalmanSoz
Dear PM @narendra modi: Since you don't respond to questions in India, can I please ask you only one question while you are in the UK:
Is it true that questions posed to you by the London audience have been screened in advance?
Thank you. #PMinLondon

shahid siddiqui? @shahid_siddiqui
Everything was controlled, not a single question even to maintain a semblance of objectivity. Open sycophancy, which would embarrass any self respecting public personality. Prasoon Joshi scripts a well planned show for Modi Ji. Every question or answer seems to very well worked out, well scripted. Congratulations on a great Royal London Show

Meghnad@Memeghnad
Lovely performance by #PMinLondon. All questions were very tough and many answers were given by Narendra Modi by referencing someone called Narendra Modi multiple times. Seems like a great guy. Taran Adarsh gives this a 4.5 rating, especially since Prasoon Joshi was involved.

S Jai Hind? @Shehzad_Ind
Many criticising @prasoonjoshi_ (a poet not a journalist) for his style of interaction with @narendramodi are the same ones who fawn over such interviews of @RahulGandhi by a so called serious journalist #PMInLondon (Journalist to Rahul during Guj polls: Mujhe Pidi se milvaye )

Prabuddha Chaudhuri? @prabuch
@prasoonjoshi_ This is sycophancy and toadyism of the extreme highest order. Why do organisers have to rig such an event in favour of the PM and orchestrate a Q&A session to give him the aura of a messiah which he clearly isn't?

Umair Muhajir@umuhajir
Reminds me of an anecdote: British ambassador supposedly once asked Tsar Nicholas II if he still enjoyed the people's confidence; the Tsar responded with rhetorical question as to whether people enjoyed HIS confidence. The year was 1916/1917. (Cited in @Victorsebby Lenin bio.)z

Swati Chaturvedi @bainjal
Senior Bjp leader “@prasoonjoshi_ should change his name to spoon Joshi, after his love fest with Modi in London”!

Tony Joseph? @tjoseph0010
"Prasoon Joshi asks the Prime Minister —you are working hard but can you change the nation alone?" Yup, the Nation is the problem! We need to elect an entirely new set of citizens and dump the existing ones.

Sagarika Ghose @sagarikaghose
A masterfully orchestrated mega show, with the most comically disingenuous questions in UK to attempt to resurrect the "Modi magic" even as a shambolic government limps to the end of its term. Where are the serious questions on the government's record so far?

Shivam Vij@DilliDurAst
May God give everyone an interlocutor like Prasoon Joshi.