Any enrichment provided for captive animals is always beneficial. 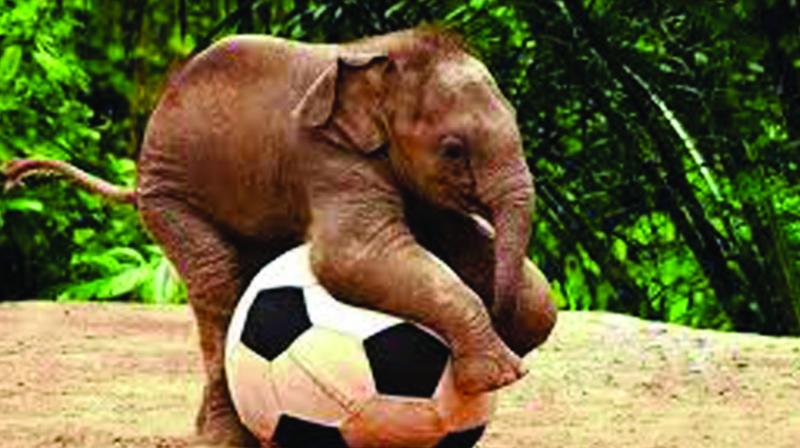 The Uttarakhand Forest Department has taken a very unique initiative to de-stress the captured elephants.

The Uttarakhand Forest Department has come up with an interesting and unique idea to de-stress captured elephants used for patrolling in forest areas. The authorities have decided to introduce playful activities, toys and football to16 such elephants in the Corbett Tiger Reserve, 10 of which brought from Karnataka. The instructions had been issued by Principal Chief Conservator of Forests (PCCF) Jai Raj, according to whom elephants like playful activities, be it splashing water or kicking at football and the technique has been successfully implemented in Wildlife SOS Elephant Conservation and Care Centre Mathura.

The officials are already worried about the increasing aggression in some of the wild elephants in the Corbett Tiger Reserve as they have been separated from their wild habitat and therefore expect that such initiatives will ensure that the elephants get good exercise and remain cheerful.

We ask animal rights activists, forest department officials and public if this seems to be a feasible idea for keeping the animals cheerful. We also seek their opinion on the reasons behind elephants becoming aggressive and other probable solutions to keep them in control.

I have spent many years as an admirer of elephants and a few years living amongst them in Uttarakhand as well as down south. In my limited understanding of people and animals, I do know that no animal likes being captured. So, firstly, it is a very selfish reason. We capture elephants only to protect humans. It reflects zero care for the animal. So, if we really want to provide for their 'well-being' then the rule is simple – a free elephant is a happy elephant.

Elephants are intelligent, sensitive and bound by a sense of family and land. Taking that away from them is going to leave them agitated. This is why they get aggressive – almost similar to humans. So, my question is: if I give you a ball and water to play, can I hold you captive?

There may be elephants that interact with balls and water favourably, but in the long run surely a better solution should be worked out. Like a gated sanctuary for them to roam free. Give the elephant a sense of freedom if not freedom and maybe we may see them happier.

The whole premise for this activity is wrong. Why should the forest department have captive animals in first place?If you look into a captive elephant’s eye you can clearly see the suffering, there is no way to distress a captive elephant. Elephants are not footballers.

It is high time we stop using elephants at all. What we really need to look at alternatives. If we have got technology why not use it for the protection of animals. First and foremost, retire all captive elephants to sanctuaries, especially the temple elephants.

Any enrichment provided for captive animals is always beneficial. Enrichment helps in several ways; chief of all is to keep the animals active and improve their muscle tone. Personally, I do not know how specific activities such as football would help, but enrichment overall is always good from a pure welfare point of view.

We humans love to control, sometimes for all the right reasons but mostly for reasons unknown. The Uttarakhand Forest Department has taken a very unique initiative to de-stress the captured elephants.

Modern day amenities include parks, gymnasium, swimming pools, water parks and as the list goes on we concertise our establishment and very often de-establishing the owners of their rightful domain. However, such ambitious projects can very effectively build a happier environment not only for the humongous herbivore but also for the future generations.

If these playful animals are happy, I am certain they have all the right reasons to keep you and your kids happier. As I once read in school, an elephant never forgets a favour.