On a quest to reform

In trying to find meaning in life, Archana switched tracks several times and the final one changed the lives of those around her as well... 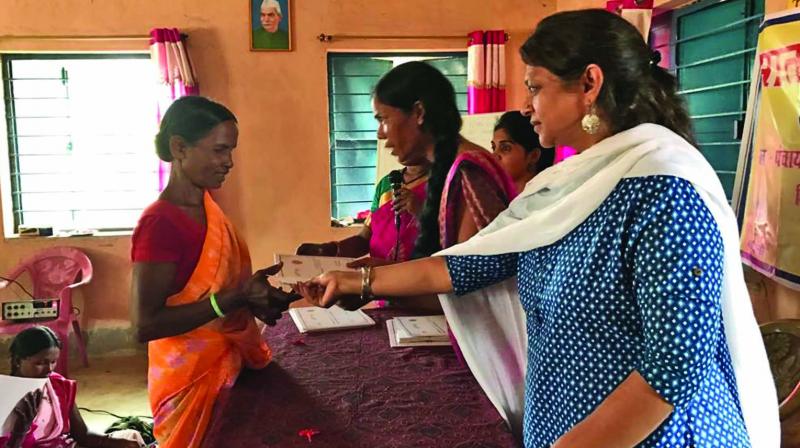 Archana Kapoor of SMART with women at one of the centres.

Working for an oil company in the public sector, she wanted to do something that felt more real and switched over to documentary filmmaking. But while shooting on the field, Archana Kapoor was not satisfied being a distant viewer. The abysmal situation of people ignited a flame in her that tranformed her life as well as of those around her. Archana founded “SMART” (Seeking Modern Application for Real Transformation), a non-governmental organisation that works for social reform.

She is working with the marginalised section of society, especially women, by using modern means of technology. While describing her NGO’s agenda she emphasises more on real transformation and says, “Real change can only be achieved when the beneficiaries become stakeholders and take ownership.”

She adds, “Being a documentary filmmaker I got many opportunities to travel across the country. I even went to places like Siachen. The themes I covered varied from suicides of farmers, plight of craftsmen and weavers to the work of border road organisations and more. Exposure to all these  stories made me realise that there was a lot to be done to achieve equality, justice and opportunity for those ignored by mainstream media.” She also visited Bangladesh where she got a chance to see the work of BRAC (Bangladesh Rehabilitation Assistance Committee), an international NGO. Inspired by their work she decided to set up an NGO on her own. Though headquartered in Delhi, the NGO has managed to make its presence felt all over India. The foundation has worked in Uttar Pradesh, Haryana, Tamil Nadu, Mumbai, Jharkhand, Assam and Kashmir.

At the age of 40, she started working toward improving the quality of education in neglected regions of India with a small team. But she soon realised that in order to introduce effective change, she needs a holistic approach. “Today, we work on diverse issues including health to empower communities. We also work for financial inclusion to help people get access to banks, on panchayati raj for transparency as well as consumer awareness,” says Archana.

The social activist adds, “Poverty has a woman’s face. To eliminate poverty, women have a crucial role to play. Therefore, we run several programmes on women empowerment, particularly in conflict zones.”

The NGO believes in long term sustainable programmes and not projects, and has launched ‘Radio Mewat’ — a community radio in Mewat (Harayana), that seeks community participation. Archana explains, “Through this project, we have tried to make people comfortable with technology. Now they work with computers and learn how to operate different software. Today, women in Mewat are using narrow casting equipment and have become quite comfortable with this technology.”

While Archana finds this work  extremely satisfying, she also calls it a constant struggle. “Resources are a huge issue. There are constant technical challenges. Some frequency clashes with other community radio stations also happen.”

But she concludes, “It is so important to be heard. There are millions who feel they are voiceless because no one wants to listen to them, not that they can’t speak. I have also learnt that changing your mindset is a slow process and takes its own time.”