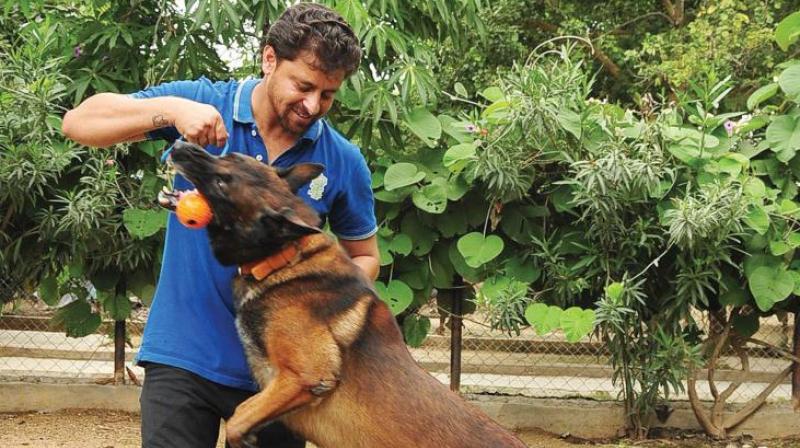 Chandra Sekhar and Czar during a training session

When Mantravadi Chandra Shekhar was a teenager, he fell in love not just with dogs, but with the concept of ‘communicating’ with dogs. The idea that dogs could understand what he would say amused him, and he wanted to take it up as a career. The only thing in his way? His grandfather had firmly said that it was either going to be him or a dog that will stay in the house.

When he was 22, he couldn’t resist, and got a beagle without his grandfather’s knowledge. “I trained him in such a way that I managed to keep him in the same house as my grandfather for six months! He wouldn’t bark or run around, all because I trained him to be that way. One day I forgot to shut the door and my grandfather found out.”

It was this stint that made Chandra Shekhar confident that he would make an excellent dog trainer and canine behaviourist. Now, at 33, Chandra Shekhar from Hyderabad is the owner of Progressive Dog Training Kennels and the pet parent of an award-winning dog, Czar, who is now on the verge of ‘retirement’ at eight-and-a-half-years.

In 2016, Czar, a Belgian Malinois, became the first dog in India to get certified in an international sport called Protection Sports Association (PSA). PSA is a protection sport that originated in the USA. The sport includes a courage test, obedience test, a chase and attack after decoys, and other such exercises, which only well-trained dogs can perform.

So how did the journey with Czar begin? “I started training myself to train dogs by way of YouTube videos and then went on to attend workshops for the same. I realised that for a more intensive training, I needed to get a Belgian Malinois, a breed that is extremely talented and can be trained for a myriad of purposes. They are very versatile. It was the breed that sniffed out Osama Bin Laden from hiding. So I brought Czar from Belgium for a premium amount.”

Chandra Shekhar shares a glimpse of Czar’s training. He says, “Conditioning for these dogs is important because they should be able to defend their owner in any environment. They have to do tough physical as well as mental exercises. When a burglar is trying to enter the house and if he has a stick, they shouldn’t run away but need to bite their arm and hold on to them tight. The burglar would try to hurt the dog too, but he should stay in the game. This is what decoys simulate in the competition. The dog should let go only on the command of the owner. Czar loves physical exercises like running and swimming.”

With such intense training going on, it is not uncommon for a pet lover (with no experience of training) to ask, ‘But, isn’t that borderline cruelty?’ For this, Chandra Shekhar has an interesting answer. “It’s not! If an army personnel putting his life on the line to protect the citizens of his country is not cruelty, then why should it be any different with dogs? You might say, ‘but it’s the soldier’s choice, but here the dogs can’t speak.’ But that’s not true. If they are not up for it or don’t have the potential for such training, the dogs would retreat by themselves and won’t listen to you,” he says.