Around India in 18 days

Filmmaker and entrepreneur Shailendra Singh aims to spread the message of harmony and unity through his ‘One India My India’ rally. 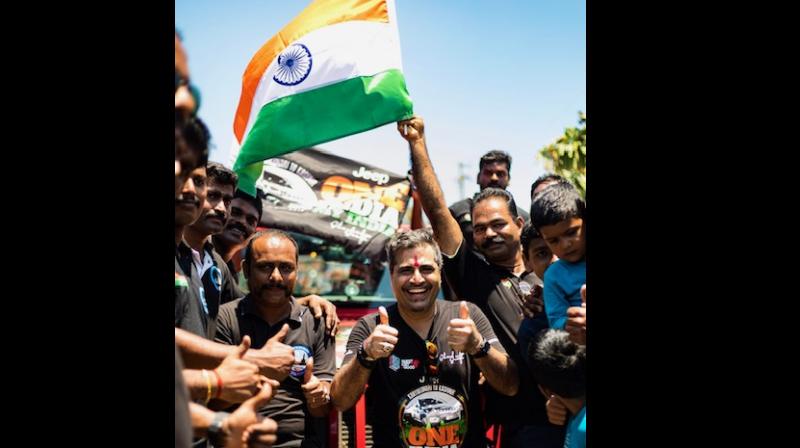 Singh, who met close to 50 unsung heroes on this voyage, is extremely inspired by their sensational aura and selfless service to humanity.

After covering over 7000 kilometres through 11 states and 15 cities in 18 days, director-singer-producer-entrepreneur Shailendra Singh is back to the bay and elated about the completion of his ‘One India My India’ rally.

Travelling across the length and breadth of the country, Singh aims to spread the message of unity, compassion, and harmony. Disheartened by the lack of compassion, especially among the youth, Singh first came up with a song, Anthem4Good One Nation One India, followed by a rally across the nation, introducing the unsung heroes and sharing their benevolence with the country.

“The idea of doing the rally was to spread the message that if the population of 130 crore Indians unites and starts believing that we are one large family, we can turn into a phenomenal nation,” shares Singh.

The rally, which started on Gandhi Jayanti from Kanyakumari, travelled through Kochi, Coimbatore, Hampi, Goa, Ahemdabad, Udaipur, Delhi, Chandigarh and Amritsar, before ending in Jammu and Kashmir. “We started at Mahatma Gandhi Memorial, where only once a year sunlight falls on his ashes at midnight. To my surprise, there were close to 70 army personnel, called the Kanyakumari jawans, who were holidaying with their families, giving us a guard of honour. I have no clue where they came from. We planted trees with them and now I am connected to them for life,” he shares, adding, “Since the human body constitutes 70 per cent of water, I wanted to proceed with the water connection.”

Singh, who met close to 50 unsung heroes on this voyage, is extremely inspired by their sensational aura and selfless service to humanity. “They all used one word - ‘Seva’ (service), which didn’t make sense to me earlier, but now is clear. After meeting these people, the definition of celebrity has changed for me,” says the entrepreneur. “We went to a special school in Kolhapur where blind girls aged 10 and 14 presented us with the paintings they made. The painting I picked was made by a boy who paints with his mouth, as he has no hands, and he was the most cheerful person in the room,” he adds.

What further solidified his outlook towards humanity and harmony was the time spent with people such as 18-year-old Mesh Manoharan, Sai Vignesh, and Dr B. Ramana Rao, to name a few. “A teen is building his life on saving animals and aspires to become an animal lawyer. Dr Rao told me that as a doctor, his duty is fulfilled only if he can reach out to every patient of his, irrespective of class. He also told me that his entire family doesn’t take an off on Sundays, but is out on check-ups. Or be it Mesh the scuba instructor, who single-handedly saved lives of 70 people during the Kerala floods on his kayak. He says his only regret is that he couldn’t say more lives,” shares Singh.

On the last leg of his rally, he met Raj Singh in Jammu who, after giving 30 years to the armed forces, has dedicated his life to training underprivileged children for the army. “He is fondly called Chachu and has so far trained close to 500 kids, out of which 90 are in the forces. He does this free of cost,” he shares.

A firm believer in ‘everything divides but love unites’, the sole agenda behind the song and rally was to connect fellow humans with another. During his rally, Singh screened the anthem in every village, city, and state and is now being released in various regional languages. “I believe this generation has forgotten to hug and meet in person. The road trip is a message to the youth that you live in the real world, so you need to express real emotions. And if you are a real Indian, then you need to celebrate India realistically by celebrating its culture and people,” he concludes.