Matinee under the stars

With open-air screenings offering exciting and immersive experiences to movie-goers, Mumbai gets its own screens in the skies. 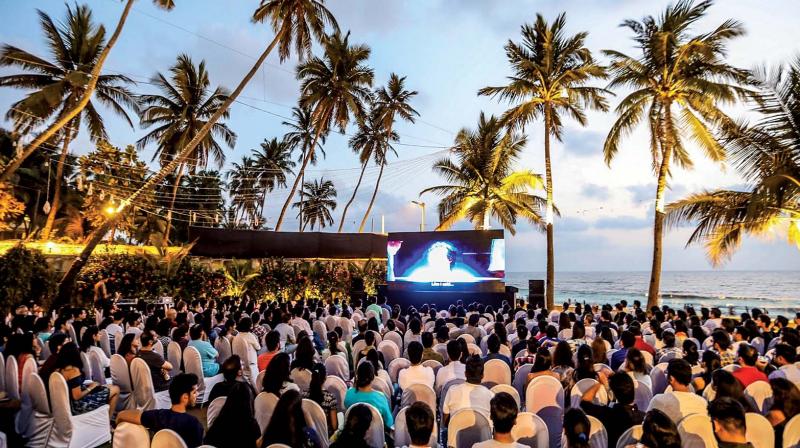 A screening organised by Sunset Cinema Club at Razzberry Rhinoceros.

Think about it — watching your favourite movie sitting under the sky facing the beach or on a rooftop with the sun setting in the backdrop and you surrounded with people sharing the same taste. To go with that ambience is alcohol and food. Doesn’t that sound exciting?

With places like Little House or Sunset Cinema Club group, to name a few, the idea of bringing people together to watch a movie in an open-area set up is now gradually growing in the city. The audience for such screening can range from 300 to 500, and also include intimate gathering, all depending on the place you chose.

“The benefit of this experience is to watch a film under the open sky. At times people get their own food and alcohol for screening, which is unlike the cinema halls,” says Priyanka Desai, co-founder, Little House which uses a 95-year-old bungalow as an event space, organising community-based events and movie screenings is an extension of that idea. “The aim is to bring people together for different causes, be it food or film screening,” she adds.

Clubs like the Sunset Cinema Club work towards providing an immersive cinema experience. They chose a movie in accord with the venue they pick, keeping an audience on average of 200-250. “In Mumbai, we have movies by the beach and on rooftops. We place the screen in such a way that viewers get to see the background. For example in Delhi we placed the screen with the Qutab Minar in backdrop,” says Sanchit Gupta, co-founder, Sunset Cinema Club.

Calling it a game of playing with the elements in hand, Sanchit explains they combine the ambiance and the movie. “We have screened Fight Club in an under-construction bar. We lay emphasis on choosing a film that goes with the ambiance, and visa-versa”.

The Sunset Cinema Club, which has a tie-up with Hollywood studios and distributors who grant them permission for screening, puts a list of six to seven movies they get permission for on Facebook, and depending which gets the maximum votes is screened. For their weekend screenings, they list out 10 movies.

The Little House often ties up with studios like Hartak and Cineplay, and recently organised the cultural screening of a German classic Boichek with an intimate crowd of only 30 people. Priyanka explains while there are screens for all kinds of films, screening for movies in an intimate setting are for films that deserve a greater dialogue. “At most of our screenings the actor, director, and producer are present. Boichek was one-and- a-half-hour-long and the discussion went on for an hour,” she adds.

The charges for such events are minimal and food and beverages play a big part in creating this experience. “The idea is to have a homely feeling, like how we get together at a friends place to watch a movie. Screening is just a reason for people to come out, the larger goal is community interaction,” smiles Priyanka.