After Forest Department objected to their request to be granted bail, court rejected it and extended judicial custody to January. 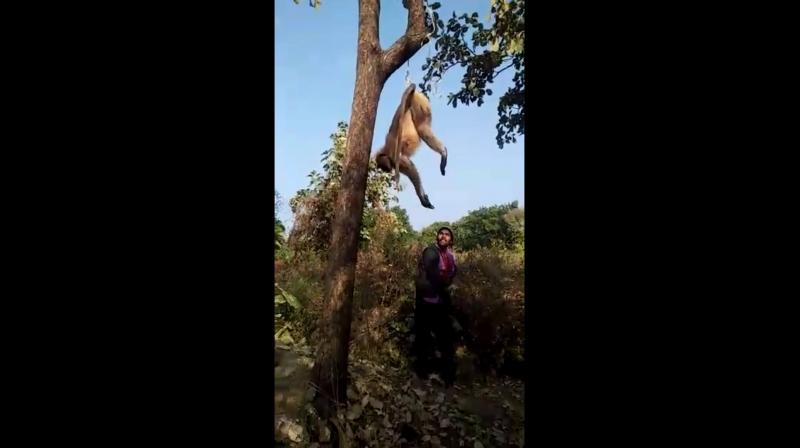 A man was filmed mercilessly beating a langur with a stick until the animal died. (Photo: Facebook/ Fauna Police)

Mumbai: After People for the Ethical Treatment of Animals (PETA) filed a complaint with the Superintendent of Police, Washim, and the Round Forest Officer, Risod Taluka of Maharashtra, the Forest Department registered a Preliminary Offence Report against three identified men under Sections 9 and 39 of the Wildlife (Protection) Act, 1972, for mercilessly beating an Indian grey langur (commonly known as a Hanuman langur) to death with no provocation and likely for "fun".

The accused were arrested and appeared before the Court of Judicial Magistrate of First Class, Risod Taluka, on 18 December.

After the Forest Department objected to their request to be granted bail, the court rejected it and extended their judicial custody to 22 December.

In its complaint, PETA stated that in a video that went viral, one man could be seen mercilessly beating a langur with a stick until the animal died and that his accomplices filmed the barbaric act. The attack took place on 14 December, and PETA learned of it via the video.

"People who commit acts of animal abuse often move on to hurting humans," says Meet Ashar, PETA's emergency response coordinator. "PETA commends and thanks the Washim police and Forest Department for taking swift action and devoting to this case the serious attention it deserves. The attackers must now be prevented from harming any other living being."

Research in psychology and criminology shows that people who commit acts of cruelty to animals often don't stop there – many move on to hurting other animals or humans.

The US Federal Bureau of Investigation has found that a history of animal abuse is one of the traits that regularly appears in the records of serial rapists and murderers.

This is the case in India, too: Veerappan was a poacher as well as a serial killer, and the infamous Noida serial murders of children took place at the home of Moninder Singh Pandher, who was fond of hunting.

In a study of battered women, nearly 60 per cent said that they had partners who had harmed or killed their dogs or other animals.

The JMFC Risod court once again denied bail to the main accused Pawan Dangar after the Forest Department objected to his bail plea on Friday. The accused has been sent to judicial custody until 4th January 2018.