Prepare your plants before they face great outdoors

Give your flower and veggie seedlings some tough love. 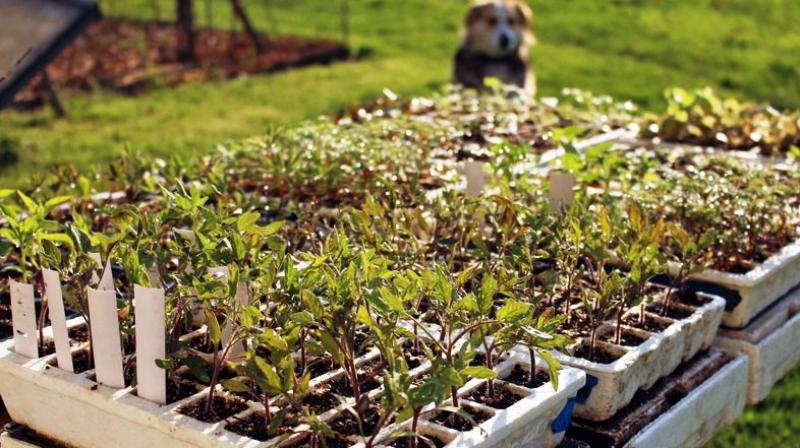 Even in the absence of cold, outdoor sunlight — which can be as much as 10 times more intense than light streaming through a sunny, south-facing window — can injure coddled seedlings’ leaves. (Photo: AP)

Washington: Seedlings raised on windowsills or in greenhouses have been coddled to some degree and aren’t ready to face the great outdoors. A temporary period called “hardening off” can prepare these plants for more intense sunlight, wind and varying temperatures.

Make this transition gradually, over the course of a week or two. A good place to harden off seedlings is in a somewhat sheltered spot outdoors, such as in a cold frame (basically an open-bottomed box with a clear, removable cover) or near a wall in dappled shade. Or offer the seedlings full exposure for limited, but increasing, periods.

The changes that lower temperatures during the hardening-off period will induce in coddled seedlings depend on the nature of the seedlings themselves.

Seedlings of cabbage, lettuce, snapdragon, pansy and other plants that can eventually laugh off cold even well below freezing develop that tolerance for cold by building up sugars in their cells. Cold, also changes the composition of their cell membranes.

Seedlings of tomatoes, marigolds, zinnias and other plants that cannot tolerate temperatures much below freezing suffer from so-called chilling injury even at temperatures below 50 degrees F. Changes in plant membranes from chilling injury interfere with sunlight driving photosynthesis, so instead damaging toxins build up in leaves.

As a tomato or other warmth-loving plant becomes hardened off through gradual exposure to cooler temperatures, it becomes better able to repair and prevent such damage.

Even in the absence of cold, outdoor sunlight — which can be as much as 10 times more intense than light streaming through a sunny, south-facing window — can injure coddled seedlings’ leaves. Gradual exposure to more intense light, beginning in dappled shade or with just a few hours each day in full sun, thickens cell walls, fibers, and cuticles on both existing and new leaves.

With increasing light exposure, chloroplasts, the green, light-trapping energy factories in leaves, also move around and align themselves in such a way that the leaves turn darker green. And stomata, which are the tiny pores in leaves through which water is lost and carbon dioxide and oxygen are exchanged, become more quickly able to open and close in response to changing conditions.

Stomatal response also plays a role in a plant’s gradual adaptation to wind. During the hardening-off period, plants become able to respond more quickly to drying winds by closing their stomata. Even movement of the plant, whether from wind or anything else, plays a role in making stomata more responsive.

Movement of plants has yet another effect: It slows stem elongation, which contributes to that stocky, lush green look that shows a plant has been well hardened off.

So blow on, shake or gently brush your seedlings regularly to toughen them up and encourage them to become stocky plants better able to handle the real world of the garden. That, along with spending a week or so outdoors in a sheltered spot or for only part of each day, will ease your seedlings’ transition to the garden so they hardly know they’ve been moved. Which is as it should be.