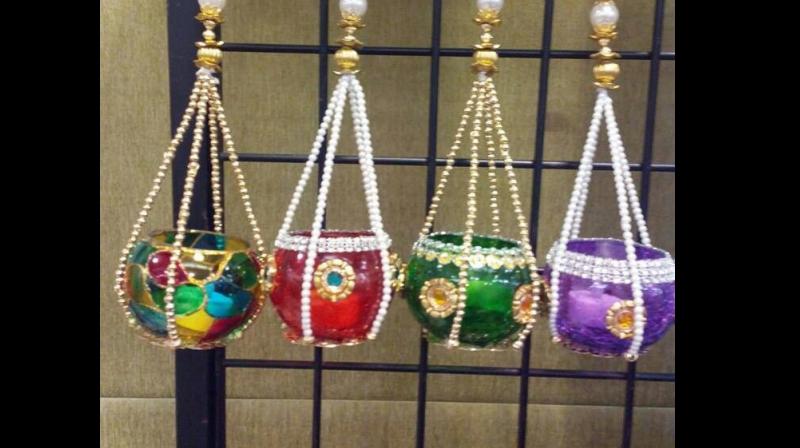 People are coming up with several ways to celebrate the special day with pomp and show and are mindful of its impact on the environment. (Photo: ANI)

New Delhi: Like every year, the festival of Janmashtami which marks the birth of Lord Krishna is being celebrated with a lot of fervour and zeal. People are coming up with several ways to celebrate the special day with pomp and show and are mindful of its impact on the environment.

They are adopting great ideas to achieve better waste management and relinquish the use of plastic.

"This year my family has decided to make small paper bags which can be used for distributing prasad to people after the puja. Every year we purchase those plastic pouches but this year we took an oath to celebrate an environment-friendly festival," says Sunita Arya, a resident of Gurugram.

To give an earthy, and festive touch on Janmashtami, Rahul Arora a resident of a society in Gurugram has some different plans altogether.

"Every year when it comes to distribution of some liquid prasad we usually use those small plastic or thermocol cups, but this year my society which celebrates Janmashtami on a grand scale has decided to use kulhads for giving out the liquid prasad as the earthen glasses can be reused again and again. After hearing my idea, several people from other societies are now taking forward this initiative."

With Krishna jhula and Dahi handi being the centre of attraction during the festival, many host dance-drama enactments of the life of Lord Krishnat that include devotional singing through the night, fasting, a night vigil and setting up an elaborate feast.

Homes are decked up with lights, streamers, and balloons which increase the grandeur of the festival.

Gopi Kapur, an event manager in Lucknow says that she is doing everything in her society to make the celebrations more environment-friendly as well as keeping the essence of the festival in mind.

"Balloons and streamers do not add much charm to the celebrations and instead is more harmful to the environment. So this year going out of the box, I will be decorating the community hall with colourful artificial flowers which can be kept and reused for other functions as well. Apart from the flowers, I will use dupattas, and curtains made of small shells and beads which will make the celebrations more memorable for the people. I am trying to do away with those plastic decorations which cannot be reused and adds to the waste."

She added, "In fact, I have also issued a circular in my society asking people to get handmade bags for prasad instead of newspaper or plastic pouches."

Another event manager Nalini Sharma who resides in Delhi says that she is getting calls from people demanding eco-friendly decoration items for decorating their homes, office on the auspicious festival.

"This year I am getting several calls from people who want me to come up with some environment-friendly decoration ideas for their homes on Janmashtami. They are even calling me up and asking me to get items like colourful glass bottles, newspaper, artificial flowers, huge mud pots and vases for decoration. In one of the celebrations, I have been asked to get about 50 saplings that people want to gift their near and dear ones as a token of love and also giving a message of environment conservation."