Duke and Duchess of Sussex commence their African tour 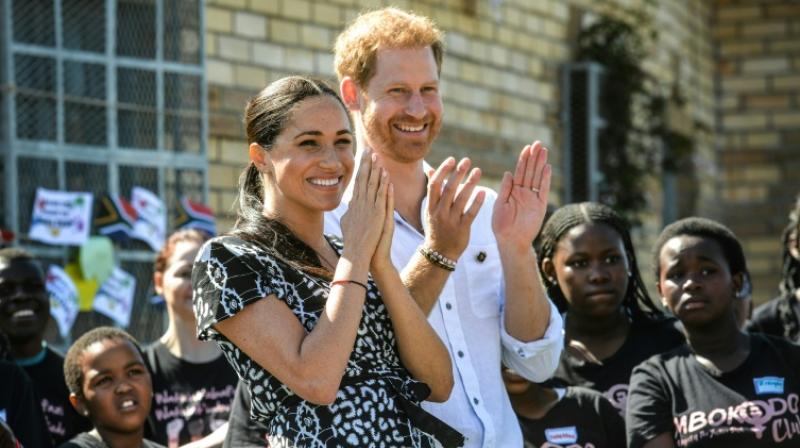 Prince Harry on Monday urged South African men to turn their back on toxic masculinity as his wife Meghan applauded girls for "standing up for what's right," as the British royal couple launched their first official tour since becoming parents in May.

The pair joined campaigners in Cape Town fighting South Africa's stratospheric rates of violence against women on the first stage of a 10-day swing through southern Africa.

Prince Harry, Meghan and baby Archie landed by commercial flight from London before heading to Nyanga -- a township crippled by gang violence and the highest murder rate in the country, and a far cry from Cape Town's image for pristine beaches and rolling vineyards.

A small excited crowd gathered to greet the royal pair as they arrived to visit Justice Desk, a human rights charity, where they surprised young girls in the middle of a self-defence class.

South Africa is one of the world's most dangerous places, particularly for women. At least 137 sexual offences are committed per day, according to official figures. In August alone, more than 30 women were killed by their spouses.

President Cyril Ramaphosa has vowed to crack down on perpetrators after "femicide" protests flared across the country this month.

Prince Harry, clad in a light-blue linen shirt and sneakers, joined Meghan, in a patterned black-and-white dress, as they hugged children and danced with them before entering the charity premises. Surprised girls yanked off their boxing gloves to hear the couple speak.

"Touching on what your President said last week -– no man is born to cause harm to women," said Prince Harry. "It’s about redefining masculinity, it’s about creating your own footprints for your children to follow in, so that you can make a positive change for the future."

Meghan, a mixed-race American who has been advocating women's rights long before marrying Harry in 2017, congratulated girls "standing up for what’s right in the face of adversity". "While I'm here with my husband and as a member of the royal family, I am here as a mother, a wife, a woman of colour and your sister," she added, prompting cheers from the crowd.

Demonstrations in South Africa have been mounting over the rising toll of murders, rapes and abuse of women and girls, and a sense of impunity that surrounds it.

A walk through history

The couple later toured District Six museum, a memorial to the expulsion of some 60,000 non-white residents from the city centre during apartheid.

The Duke and Duchess -- who describes herself as "half black and half white" -- were thrust into South Africa's history and life under the apartheid regime, which classed and divided people according to their skin colour.

Those defined as "black" or "coloured" were considered second-class citizens and only allowed in "white-only" areas provided they had a pass. "To have the royal couple here helps to unite people and... look past the pain, especially because we’re a diverse culture," Gabriela Wiener, a spokeswoman for District Six, told AFP.

Crowds lined the streets to catch a glimpse of the pair. For some in South Africa, the presence of a royal with mixed heritage could make this visit particularly special.

"My mom really wanted to be here, that's why we came. Meghan is a role model to me and my sister," said Shazia Ebrahim, a 22-year-old architect student standing outside District Six. Her mother Mishkah Ebrahim, 55, told AFP she regularly followed the couple's life.

After the tour, Harry and Meghan walked to an annexe of the museum built for former residents to share memories and cook together.  "Meghan came over, took my hands in her hands and looked me in the eye. It felt so natural, it was a very special moment," said Mishkah.

While he has yet to make an appearance, the trip marks Archie's first major public outing since his birth in May. At less than five months old, the baby will become one of the youngest royals to take part in an official visit.

The duke and duchess have largely kept their son out of the spotlight, and some royal fans felt cheated when his christening was held privately.

He last appeared in public on the sidelines of a royal charity polo match in July. Justice Desk posted a video message on Twitter to welcome the baby.

"We know the Duke loves South Africa, and as a proudly South African gift to baby Archie we want to give him the name 'Ntsika'... which means bold and brave."

The family is to remain together until Wednesday, when Harry will travel alone to Botswana, Angola and Malawi. He will visit conservation and HIV prevention projects, and a cleared minefield in Angola through which his late mother Princess Diana famously crossed in 1997.

Meanwhile, the duchess will remain in South Africa. She and Archie will reunite with Harry in Johannesburg next week, where they will complete the tour and fly back on October 2.