Run alongside your pawfect pal

The organisers have also brought on board the Pet Practioners Association of Mumbai (PPAM), who will be present at the event with five main doctors. 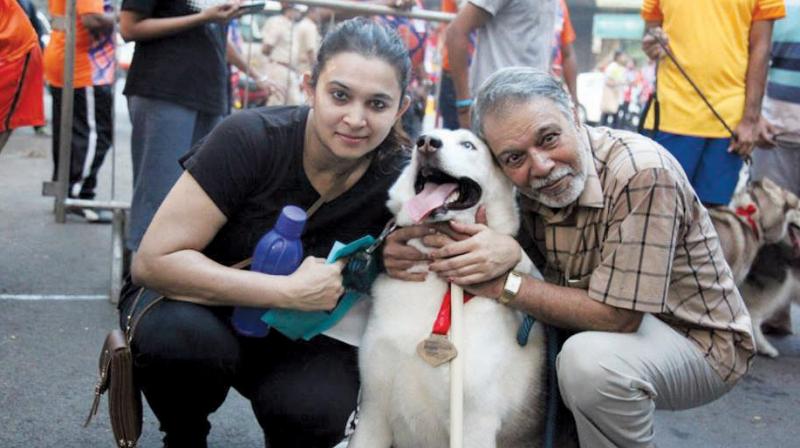 A marathon in the city is a great opportunity for pet lovers to bring their dogs along for a day of adventure and fun.

Don’t be surprised if you see a bunch of dogs and their owners sprinting across the city’s streets on Sunday morning. Sai Celebrations, which regularly organises marathons in the city, has assembled a run for dogs and dog-parents, so that they can bond through some fruitful exercise.  Post the run, MMRDA Grounds will turn into a landmark for dogs, think: a huge pet carnival, a flea market and an adopt-a-dog zone, and stalls serving popsicles.

Amit Wadhwani, the organiser of the event, hit upon the idea when he was looking for options to entertain his pets in a confined city like Mumbai. A proud owner of four dogs, Amit decided it was time to put an end to restricting his pooches to the four walls of his flat. “In Mumbai, we have smaller homes. Most times, the pet is confined to the house. Even if we are to take them for a walk, it is the same road, the same garden, and then back to the same place. Imagine if we were to be stuck in a rut like that,” explains Amit.

While the event had a first edition last year, this time, Amit decided to take things a step ahead, and make the run bigger.

Though there have been similar events in pockets like Bandra, Malabar Hill, and Chembur, Amit promises that the upcoming event is “going to be the largest platform in terms of scale.”

For the upcoming affair, Amit has collaborated with Pink Owl, an event-based venture that came up with the idea of having a carnival, only for pets. Ruchi Makkad of Pink Owl says that marathon is a good way for pet parents to bond with their flurry friends. “The city has very few options for dogs to go out and play. It doesn’t help that there are very few parks in the city. This event will help both, parents and their pets,” she explains.

The carnival at the end of the run will have 22 stalls catering only to the pets. “Think about it like a one-stop shop for pets. There is a bakery lounge for dogs, paw massages, gaming zone, fun pet personality contest, grooming zone,” adds Ruchi.

And for dog lovers, who don’t have a pet, there is no need to hang your head in disappointment. “For those interested, there is also an adopt or foster section for those who don’t have pets but have always wanted one,” concludes Ruchi.

On November 5, 7 am onwards
At R2 Grounds, MMRDA ground, BKC