Hooked by the bait

Several websites with questionable credentials lure viewers with juicy headlines and stories that are often untrue. 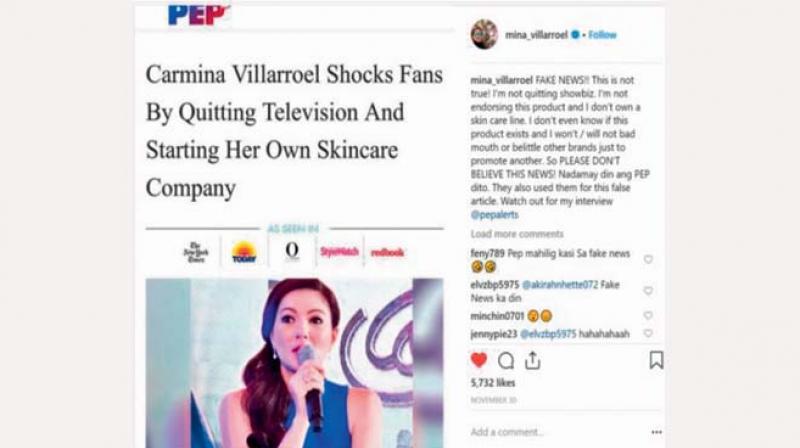 Carmina Villarroel, a Filipina actress and well-known supermodel was once reported to have quit the showbiz. The actress took to Instagram to deny it

The urge to click on a link with a sensational headline and an even more eye-ball grabbing picture is only human. It’s this very consumer psyche that click-bait websites feed on. Our Facebook feeds and favourite news websites are loaded with links to sensational news — Bollywood being the top contender in the game.

After the much-talked about wedding of Ranveer Singh and Deepika Padukone, social media feeds witnessed a burst of fake quotes by Deepika’s ex Ranbir Kapoor, saying that the newly-wed couple planned to break-up.

Another story put up talks of how “Gauri Khan has separated from Shah Rukh and she breaks down in the interview where she recalls her traumatic days with the actor!” Again, fake news.

The reason these websites are called ‘clickbait’ is suggested in its very name — they bait consumers with a sensational headline to increase traffic and clicks on the websites.

While newspaper organisations pay a harsh price for incorrect reports social media seems to get away with it. This is largely because there are no concrete laws against fake news in the purview of social media, and hence taking action becomes cumbersome.

How do celebrity managers handle these ‘rumours’? Because they hound the newspaper, threatening to sue even if one uncomplimentary line is written about their star client. And with these nasty stories, they are mum. Do celebs look at it as “any news is good publicity”.

Prabhat Choudhary of Spice PR and the brainchild behind Baahubali’s marketing strategy feels that one should know which rumour to pursue and which one to let go. “As a publicist or a manager, you need to have discretion as to what will gain traction and what will not. If it is the news of a death, then there is no point adding fuel to the fire by taking any kind of action, because the audience is anyway not going to be interested in it once the news is classified as fake.”

He adds that going digital has changed the face of gossip and news.

“It is much easier to track down the source if it is a digital agency and can be countered way more effectively. Sometimes, taking action against a rumour that you do not want to spread, may just backfire and become talk of the town anyway.”

Shweta Ojha of Sony Music India feels it is very difficult to keep track of news sources that are feeding these clickbait websites. “The scenario has become such that only one of these websites runs a story and all the other automatically pick up the article and publish it, mostly without verifying the source. But these are just unavoidable implications of the digital age that need to be handled with care. It’s important to keep the genuine news dispersal network validated. There should definitely be an open window for legal recourse in case of extreme cases if they ever arise.”

Resonating the sentiment, Tamanna Punjabi, actress Neha Dhupia’s publicist, says, “Wherever we can, we call up, we write to the editorial teams and get the news corrected. It definitely undoes our doing. Celebrities have to work harder than everyone else to maintain their reputations and get more clicks/views, so it’s not right to use their name and write fake news. And as far as business is concerned, I feel it should be the work that speaks for everyone, including celebrities. So if they’re working hard and working on projects, they don’t need these methods to stay in the news. We, as publicists, and even journalists, respect the work they do and support them through stories and news pieces. Fake news is definitely not good for anybody.”