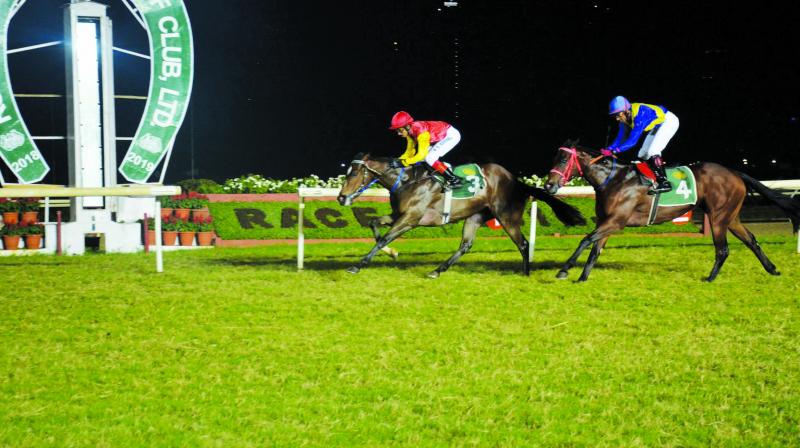 Night horse racing is among the oldest of all sports, and was played by the royals and nobles of yore.

A large number of horse racing enthusiasts gathered together at the sprawling 2400-meter oval shaped Mahalaxmi racetrack, for the city’s first-ever ‘evening horse racing’ event on Saturday. The Royal Western India Turf Club (RWITC) became the only venue in India to host a night horse racing sports event at par with other international cities, their tagline being,  ‘If you never go, you will never know.’ “It is time for a change in Indian racing and to give a  much-needed boost to the sport apart from providing an exciting evening for the fun loving people of the city,” says Sanjay Shah, a committee member of RWITC.

A total of eight horse races took place at the event, out of which one was a whip-free race and another dedicated to filly horses. A total of 40 horses participated in the event. Besides this, the 500-attendees were also regaled with a host of entertainment activities that brightened the moonlit evening further. “Having a race under lights along with other forms of entertainment makes it an inclusive evening providing options to various age groups to enjoy at the same place,” says Gaurav Rampal, another member of the club.

Night horse racing is among the oldest of all sports, and was played by the royals and nobles of yore. But in today’s times this popular sport is undergoing a series of changes. “It’s no longer the same, there is an option like ‘syndicated horse ownership’ and with a small investment it is possible to enjoy the game,” confirms Sanjay. Similarly, Gaurav seconds the response saying that now-a-days it is very affordable and by pooling in a small share, multiple people can jointly own the same horse and enjoy the same benefits, “It’s a great way of social engagement as well.”

The sport is also garnering considerable attention from B-town. Present at the event was director Milan Luthria of the Once Upon a Time in Mumbai fame, and film producer Farouq Rattonsey, who produced films like Zubeidaa, who came along with their horses. Both the B-towners own mutiple horses and frequently participate in such races. “These kinds of evenings are a best chance for them to rub shoulders,” says Sanjay.

For animal lovers concerned about this style of racing and the harmful effects it might have on the horses running at sundown, the organisers assure us that the horses actually enjoy this sport. “Evenings being cooler than afternoons, bringing a refreshing change for horses,” assures Gaurav. Sanjay adds further explaining that horses have two-colour dichromatic vision and they can naturally see the blue and green colour, “Though they can’t distinguish from red.”

Organisers observe that the sport is facing a threat due to the impatience of the younger generation who are increasingly drawn to other forms of sports. “It’s a cultural shift which has evolved over decades. Youngsters have no patience that this game demands,” says Gaurav. However, he sounds confident when he says, “Once bitten by a horse racing bug, it’s not easy to get it out of one’s system.”