Appealing to the intellect and the heart

The mashup is composed by Vinod Krishnan who brings lots of energy to the composition for Indian Raga, a start up that is based in Boston. 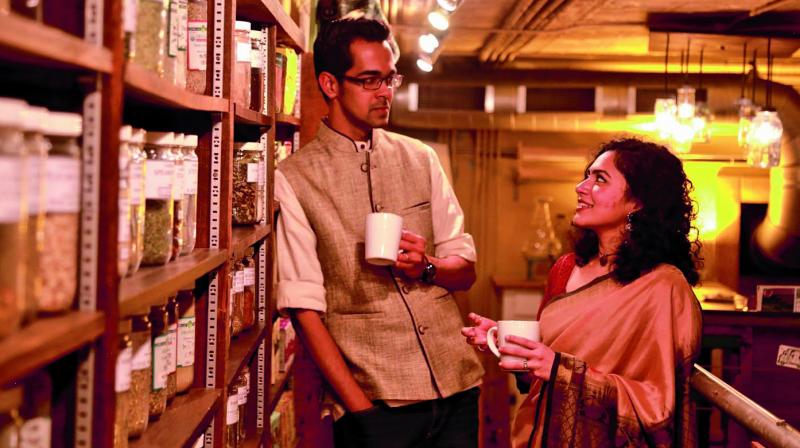 It has been sung by two amazing singers Maalavika Sundar and Vinod Krishnan, who has sung it and produced the music too.

I have a tendency to almost obsessively fall in love with a piece of music and then play it virtually on a loop till I can hear it even without the actual song. My present obsession is with an old bandish of Hazrat Amir Khusrau Main Toh Piya Se Naina Lara Aayi Re… It is a mashup of the old Sufi composition along with a tillana in Raga Desh by one of the greatest contemporary pioneers of the violin for carnatic music, late Lalgudi Jayraman. It has been sung by two amazing singers Maalavika Sundar and Vinod Krishnan, who has sung it and produced the music too.

Launched on December 31, the song has gone viral and while the enthusiastic infectiousness of Maalavika of the Indian Idol fame is endearing, it is the repose and gravitas coupled with the clarity of his shrutis that made me do a double take on Vinod Krishnan.

I have heard and seen him in the immensely popular number Shape of You and his incredibly appealing musical genius coupled with an intellectual approach has made both the numbers memorable.

Out of sheer admiration for the latest bewitching number I sent a message on the social media to him, sounding suspiciously like a fan. And much to my surprise instead of some automated thanks, he reverted within hours —  taking into account the time difference with USA — for he is based in Minneapolis. And began a wonderful conversation that I must share for he is not your quintessential musician, even though he knows his anupallavi from his pallavi. Vinod Krishnan is a person who straddles many worlds even within music as in his profession — software design. He is a very accomplished vocalist, a music composer and plays several instruments, including the piano to perfection.

There is a shy smile along with an almost indulgent beaming for his co-singer Maalavika in the video as he goes with the flow of the music in perfect tandem in Piye Se… They were to shoot outdoors but the weather turned cold suddenly and it started snowing.

“Even for me who has lived through this weather for a decade, it was unbearably cold. Maalavika who is from sunny Chennai, refused to even emerge from the car as it was freezing for her! Not wanting to look like Yash Chopra’s filmstars in hiffon sarees in snowing Switzerland, we had to change the venue at the last minute to a wholefoods cafe. It was providential that I had been to that café a few days ago and knew the owners. A few phone calls and we decided to shoot there as it has an interesting ambiance and the warm lighting too added to the mood,” says Vinod reliving that moment.

Did it help that both of you have the similar genetic code of music – carnatic, I wondered. “In a way, yes. We both knew the tillana which is a popular yet advanced tillana that every carnatic musician learns,” he says.

The mashup is composed by Vinod Krishnan who brings lots of energy to the composition for Indian Raga, a start up that is based in Boston.

It is striving to reach newer audiences for the idea is to create collaborative spaces for aspiring musicians especially in the experimental genre. Indian Raga also has a fellowship where they make videos and many of Vinod’s collaborative videos have been part of this fellowship programme.

They work with a legendry classic composition along with the latest music to create compositions that work well together. “The idea is bring together other genres and ethnicities for greater outreach and make the music unusual and yet use words that ring a bell somewhere basically for a recall value — like a hook to make you interested. They are bound by the common thread of classical music. The idea is to make classical music “cool” by radical musicians to make a difference in their appeal and outreach. After all, anytime in history, something or the other is contemporary,” says Vinod with disarming candour.

For him, “music is something I have learnt since I was a child. I am deeply passionate about it. It is as important as breathing for me! When we start, it is like a blank canvas. It is like a painting. What one is exploring are only possibilities. Except the confines of the rules of a raga, within it I have complete freedom to create,” he says about his experience with exploring other types of music apart from the strictly classical.

Vinod is a computer scientist by training, who was an average programmer by his own admission, until he realised that he would make for a better software designer.

“The entire dynamics of the human/computer interaction is what interests me. The entire gamut of usability and user experience can make or break a product in the virtual space. Visual design, its intuitive user friendliness is something I feel strongly about. How visual design and words impact psychology and how deeply it affects usage is an established field in the US. My mandate is to create software that is commercially successful on the basis of it sheer design,” he says about his work.

Where do music and software design converge for him? “In music too the retail user experience is very important. One tries to gauge audience response, the visuals, the instruments – just like in software!” he says disarmingly.

At this point I ask him if he is ambidextrous, for his left brain and right brain seem to be working in complete harmony. “No I am left-handed,” and I am not surprised!