The journey begins from the formless and unfolds in various forms accessible to sensory perceptions. 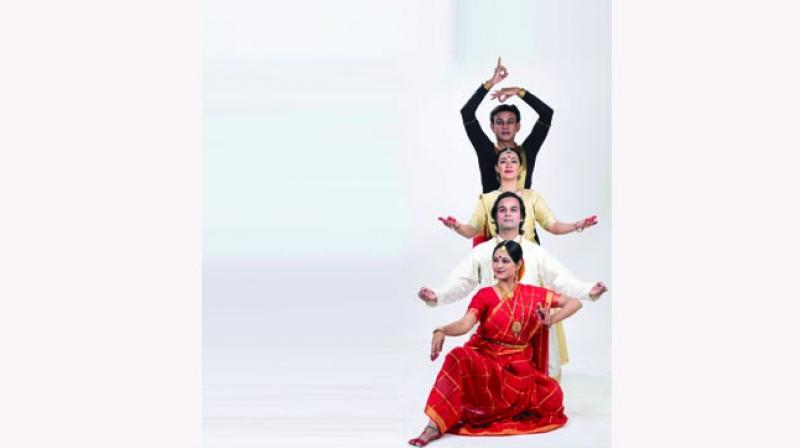 Rango’ntaratma is the central sutra of the Shiva Sutras which define the inner consciousness of the individual as the performance arena where life is played out.

We speak of the spiritual core of classical Indian dance but it is rare for artists to reach beyond stories with the aspiration of tapping into the cosmic. Kashmir Shaivism expresses a profound non-dualistic understanding of the universe — viewing life as filled with rasa/enjoyment. This philosophy of inclusiveness is the need of the day and I keenly await its interpretation through Bharatanatyam and Kathak in a production by Anugraham — Classical Art Community called Rango’ntaratma on April 1 at 6:45 pm at Kamani Auditorium.

Rango’ntaratma is the central sutra of the Shiva Sutras which define the inner consciousness of the individual as the performance arena where life is played out. Every individual is an actor who assumes multiple roles in his/her life. Manifesting this in performance has been the driving inspiration behind Kamalini Nagarajan Dutt’s yearlong creative efforts envisioning the theme and working with four superb dancers to bring to life the concepts of this wonderful sutra — Naada, Bindu, Kalaa and Rasa.

The production will reveal the hidden concepts of some of these mythological symbols. The journey begins from the formless and unfolds in various forms accessible to sensory perceptions. Full disclosure: Kamalini Nagarajan Dutt is my kalyanamitra and I have watched with awe as she has immersed herself into the process of developing the concepts and directing the dancers over many months.

Not a household name, unless you are among the top dancers and musicians of India — recorded by Kamalini for television over four decades as the foremost Indian television producer of the performing arts. This was bracketed between her previous professional training in three styles of classical dance, alongside engagement with literature and philosophy in multiple Indian languages, and her retirement as founder-director of the Central Archives, Doordarshan (DD) where she pioneered the major digitisation of DD content and the release of over 100 DVDs of intangible cultural heritage.

In her enduring avatar as teacher and choreographer, Kamalini Dutt has explored the distilled wisdom of ancient India, mining for clues and formulae to work to-wards building a world filled with joy, not wars.

Through dance we can sense a universe eternally in motion, perfectly choreographed. The Naaradopanishad says “a human being is the tiniest creature compared to the vastness and complexities of the universal or cosmic dance.”

The cosmos reflects in every soul and every visible and invisible manifestation. The journey of the soul from the primordial sound, naada, to the manifestation of the primordial energy as bindu to the ever-changing beauty of kalaa and the enjoyment of rasa will be presented by Purvadhanashree and Dr Sridhar Vasudevan in Bharatanatyam and in Kathak by Divya Goswami and Hemant Kalita.

Usually a Bharatanatyam performance begins with an Alarippu as a condensed version of the elaborate ranga puja of ancient times. It is a salutation to the Ranga, a defined space where the performance takes place. The Natyashastra says this is a sacred space where the Gods take their positions. In Alarippu, with anga, upaanga and pratanyanga (minor and major limbs), the inner and outer ranga are invoked. The ranga puja has been reinvisioned for the opening of this production with Purvadhanashree and Dr Sridhar Vasudevan paying their obeisance to God, rasikas and acharyas by building the edifice of the temple through abstract architecture in rhythm and movements, set to the mnemonic syllables of nine beats composed and conducted by Lalgudi Ramamoorhty Sriganesh.

Naada, performed in Bharatanatyam by Purvadhanashree, is the primordial sound symbolising that true knowledge is the supreme knowledge of oneness. The Shiva Sutra says “Shiva is naada”. In a unique Shiva-kriti by Tyagaraja, one of the 18th century trinity of Carnatic music and influenced by tantra philosophy, the poet-composer invokes Shiva as naada tanu and describes the five faces of Shiva — Sadyojata, Vaamadeva, Aghora, Tatpurusha and Ishana. Kamalini shared with me that the most revered Swami Lakshmanju in his explanation of the Shiva Sutra says “these faces are the five sacred states of the self”. Hopefully, Tyagaraja’s belief that the musical notes emerging from these faces of Shiva can quell the arrogance of kaala (the limited time) for us all in experiencing the ripple in space from stillness to a pulsating universe filled with various rhythms.

Bindu is the primordial form of universal creative energy made visible from sound or naada. This shakti is the energy of Shiva, the Shaktimaan or energy holder in unity. In these troubled times it is well worth remembering that the outreach of Kashmir non-dualism and tantra inspired every sadhaka to visit Kashmir. Adi Shankaracharya was deeply influenced by the Kundalini Tantra, which he poetically articulated in Soundarya Lahari. Kaula Marga and Samayachar are two paths of Shakti worship with Southern shaaktas preferring samaya as it treats the sadhaka’s body as the Sri Chakra itself. It is believed that dance and music practiced with complete surrender and devotion have the power of invoking the chakras within, unveiling the nine sheaths, navaavarna, one after the other to finally reveal the incandescence of the Bindu deep within every human being — filled with compassion. Sri Chakra Upasana or Sri Vidya is still practised in the peethas established by Adi Shankara.

Dr Sridhar Vasudevan will interpret in dance a composition of Soundarya Lahari by Muthuswami Dikshitar, youngest of the Carnatic trinity, which defines the divine golden light of bindu, the Mother — Kanakaambari Kaarunyamrita Lahari. He also will explore a composition in raga Kanakangi, which is considered a great healer, cooling inner turmoil within jatis based on trailokya mohana chakra, where the Kundalini, coiled like a serpent, rises.

If you have read this far, you can see the thoughtful efforts to offer us all an experience exponentially more profound than the “Amar Chitra Katha” mythology we generally see on stage. We all know that Indian classical dance evolved from a spiritual consciousness rather than simply court entertainment, yet few artists today are willing and able to attempt to bring audiences a Margi or a transcendental experience rather than settle for simply desi or entertainment irrespective of the dance being called classical.

Kalaa is the third level manifest in the universe after naada and bindu. The interplay of time, form and colour is kalaa. This kalaa powers ranga, the space, which is the inner consciousness, where the individual performs one’s dance of life, resulting in rasa. Shiva is known as Mahakala with no beginning or end. He is present and beyond kaala or limited creativity with his never ending cosmic dance or what physicists less poetically call the implosion and explosion of the universe.

There is also kaala, time, measured as the earth moves around the sun and another kaala in Indian music and dance which is determined temporarily by the dancer and the co-musicians. Divya Goswami will bring out the attributes of Devi in Kathak chosen according to the five time cycles of three, four, five, seven and nine (the Panchajaati) cycles that travel to arrive at sama. We all know the joy shared by the dancer and the rasikas at the momentary arrival at the sama which is a release of the tension created by the complex rhythmic patterns. Sama is equivalent to saamarasya — rasa derived from sama is equanimity. The silence that follows is peace.

Rasa is the purpose of life and natya is rasa according to Abhinavagupta Acharya. The Shiva Sutra defines it further as rangontartama nartakaha aatma (in our innermost performance space, we are all in a way performing our life). It is the detached enjoyment of the act played out as life that brings joy. Just as the dancer/actor leaves his/her identity to temporarily reflect another while still aware of both, the audience also collectively enters another world to temporarily experience the unique delight of rasa.

Shiva and Shakti are one, yet they playfully enact their relationship as consorts with male and female energies intertwined and inter-dependent. It is one energy, seemingly divided into two for experiencing rasa, and taking us by the hand from duality toward non-duality.

Hemant Kalita is interpreting the leela of Parvati’s rasa bhava toward Shiva in Kathak as well as some beautiful lines from the Mahopadesa Vimsatikam and Bhairavastavam. “When there is no I and you — I am you and you are I — who then will bow to whom? In the wakeful, deep sleep and dream state, you are holding your own glory. It is your own desire that makes you dance. In reality, you are the undivided one. Abhinava Guptacharya ardently worshipped Bhairava.”

Kamalini has said, “Rasa, bhakti and dhamma are three greatest gifts our seers have given to the world. If we indulge in life, we miss out its reality. We get fragmented by quotidian entanglement and miss the grand pattern of life. If our attitude is yogic, we watch life happen around us with awareness. Losing awareness causes life’s crisis. Natya is also called yoga as it demands chittavrittinirodhara or control of sensory desires. Abhinava Guptacharya places Natya above ashtaanga yoga as its ultimate aim is the experience of rasa, which is ananda.”

Twentieth century popular poetry by Suryakant Tripathi Nirala in Hindi and Subramania Bharati in Tamil has been woven together for a finale celebrating the complementary nature of man and woman and their ultimate oneness. This brings the performance full circle from Shiva as naada to Bharati’s beloved as naada vadivaanavala, the embodiment of naada.

A unique post-performance interactive discussion with the artists and director on Thursday, April 4, will be held at 6:30 pm in the Casuraina at the Habitat Centre by Anugraham in collaboration with the India Habitat Centre.

Sharon Lowen is a respected exponent of Odissi, Manipuri and Mayurbhanj and Seraikella Chau whose four-decade career in India was preceded by 17 years of modern dance and ballet in the US and an MA in dance from the University of Michigan. She can be contacted at sharonlowen.workshop@gmail.com.