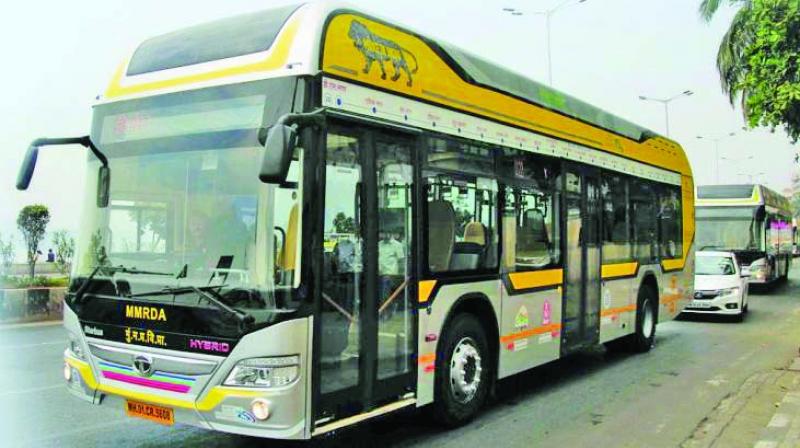 The Brihanmumbai Electric Supply and Transport (BEST) launched its new fleet of 25 hybrid buses in Mumbai with much pomp and show last month. And each bus costs Rs 1.7 crore. The undertaking’s target were corporate executives working at plush Bandra-Kurla-Complex, who were expected to give up their private vehicles and travel in the public transport that was air-conditioned, had Wi-Fi connectivity and mobile and laptop charging points. However, one month down the line, the BEST has not seen any surge or even the slightest movement on the buses, as office-goers still prefer their cars.

While many agree that public transport can be a great option as it helps avoiding the traffic jams and reduces pollution, there are  several shortcomings to this.

Ashish Trimukhe, who has been working  at Bunge India on a deputation since 2015, regularly travels from Ghatkopar to BKC but relies on cab services. Though excited at first on hearing about the new bus service, he soon realised it was of no use to him.

“After the hybrid AC bus service was launched last month, I tried to use it. I went to the Ghatkopar Sarvodaya bus stop, which is close to my home. But after waiting for some time, I realised that the AC bus does not stop there. That means I would have to anyway hire an auto-rickshaw or taxi to reach the place where the bus stops, which is why I decided to continue with private cabs,” says Ashish.

Apart from access, cost-effectiveness is also an issue for commuters. Though one would expect public transport to be cheaper than private transport, that is not the case with hybrid AC buses, rues Manish Gandhi, who owns a diamond office at BKC.

“I travel by own car along with four friends from Borivali. Bus tickets would cost us Rs 121 per head i.e. Rs 606 for five persons for a single journey. It will cost us the same for the return journey. That means we will be spending Rs 1,212 per day on travel via public transport. But private transport costs us Rs 500 to and fro, including the parking fee. So, it makes no sense for us to use public transport, which also takes half an hour more to cover the same distance than a private car,” shrugs Manish.

Saket Bondre, who travels from Mulund to BKC, echos the same view. “Road travel from Mulund to BKC can be painstaking and frustrating because of regular traffic jams. I prefer to travel by train to Kurla and take an auto-rickshaw from there to BKC. The entire journey takes me less than 50 minutes. By road, it will not take anything less than one and half hour,” he says.

However, Saket is ofthe view that a bus journey would be far more pleasant than a crowded train ride,but the time consumed is an equally important factor to be taken into consideration when it comes to the mode of transport.

Following this setback, the BEST and Mumbai Metropolitan Region Development Authority (MMRDA) have approached the corporate offices in BKC requesting them to encourage their employees to use the bus service.

The BEST administration also plans to add more bus stops on long routes for hybrid buses. As the struggle for the authorities is to attract more commuters, they are now working on introducing more routes for hybrid buses and Pravin Shinde, depot manager, Dharavi, says a proposal has already been made in this regard.

“Commuters on the long-route buses like BKC-10, BKC-11, BKC 12 and BKC 13 want more halts on their routes. In this connection, a proposal has been made and sent to the headquarter for approval. Once it is approved, the additional bus stops will be announced,” says Pravin.