None of the works were signed (as has been Banksy’s recent trend), but experts opine they appear genuine. 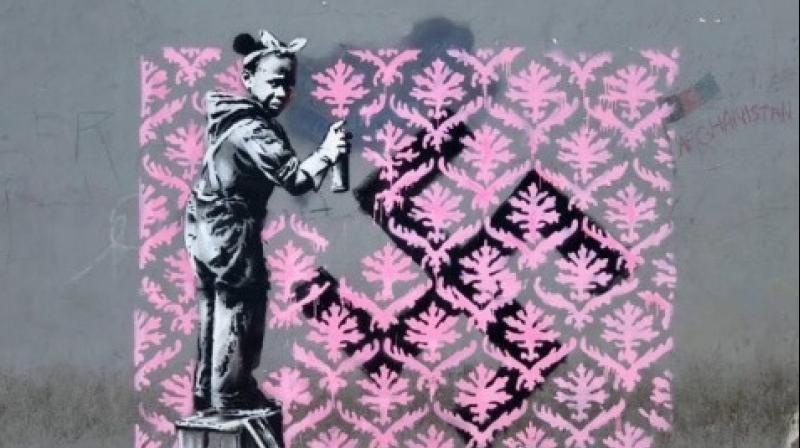 The most political work rakes up France’s tough anti-migrant policy, with nearly 40 makeshift camps being razed in Paris and the last three years. (Twitter Screengrab/ @areej_algurg)

It seems that the mysterious British artist Bansky appears to have taken aim at the French government’s crackdown on migrants in a series of new murals in Paris.

Banksy apparently ‘blitzed’ the French capitol ober the past few days, leaving behind six works on walls across the city.

None of the works were signed (as has been Banksy’s recent trend), but experts opine they appear genuine.

The most political work rakes up France’s tough anti-migrant policy, with nearly 40 makeshift camps being razed in Paris and the last three years.

In the mural a young black girl sprays a pink wallpaper pattern over a swastika on a wall next to her sleeping bag and teddy bear in an attempt to make her patch of pavement more cosy.

The image has been painted on a wall in northern Paris next to an official refugee shelter which was controversially closed in March despite protests from the city's Socialist mayor Anne Hidalgo.

Since then around 2,000 migrants, including children and teenagers, have been sleeping rough along canals and under motorway bridges.

Banksy, who has not yet confirmed the works are his on Instagram, has been a long-time supporter of the refugee cause.

Another of the new works touches on the equally sensitive subject of the ban on the niqab in France.

It shows Napoleon in a full red Islamic headscarf on the back of his rearing horse as he crosses the Alps to invade Italy in 1800.

The pastiche of David's canvass, one of the most iconic in French 19th-century art, appeared on a wall in a ethnically-mixed district of northern Paris.

And a third image near the Sorbonne university on the Left Bank - which was rocked by a student uprising 50 years ago - appeared to be a dig at the death of French revolutionary spirit.

One of Banksy's trademark rats sits under the legend 'May 1968' wearing a Minnie Mouse bow.

A fourth mural nearby took capitalism to task. A businessman in a suit offers a dog a bone having first sawn the animal's leg off.

Banksy has often travelled to make powerful political points with his art about everything from Brexit to the fate of the Palestinians.